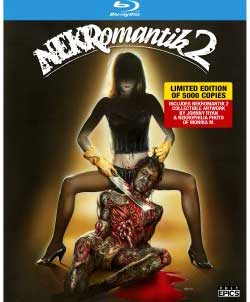 A female nurse tries to hide her necrophilia desires from her new boyfriend but still has pieces of her last lover in her possession.

Tagline: The Return of the loving dead !

After releasing the sombre and meditative Der Todesking in 1990, many believed Jorg Buttgereit’s next film would be a sure-fire opportunity for him to head more toward the mainstream as his directorial talent was clearly head and shoulders above most of his peers slogging away in the cine-underground. But instead, he returned the following year with Nekromantik 2, a film which manages to be even more outrageous than its perverted predecessor whilst at the same time surpassing the original in both thematic and technical skill. Make no mistake, this sequel to one of the most notorious movies ever made is a bona fide art film, but this didn’t stop the German authorities from attempting to destroy the print.

Aside from the aforementioned seal scene, a needless attempt to best the killing of the rabbit in part one, Buttgereit seems determined to avoid any scenes of graphic bloodshed in this film until the finale. And yet it still manages to haunt with its bleak and morbid atmosphere that is sustained throughout. The scenes with Rob’s corpse are repulsive, and this is somehow made to feel even more disturbing as there is a strange fairytale quality that lingers like a nightmare of Cinderella discovering her darkside and digging up a sexual playmate from the local cemetery. It leaves you feeling slightly defiled. You know how sometimes people refer to shock movies as leaving them wanting to take a shower afterwards to cleanse themselves of the disgusting imagery they have subjected themselves to? Well, Nekromantik 2 is one of those movies.

So while much of the dense narrative concentrates on mood and plot, Buttgereit certainly delivers on the gorehound’s expectations in the last reel for the sequence in which Monika literally swaps her boyfriend’s head for that of Rob’s. This outrageous scene easily surpasses Daktari Lorenz’s ‘climax’ in part one. And aside from the corpses and the blood and the grim atmospherics, Nekromantik 2, like its predecessor, so offers a touch of humour here and there, including the romance between Monika and Mark, and Mark’s work which sees him improvising sound effects and dubbing p*rn very badly into German. 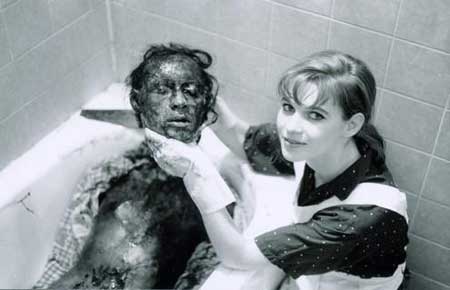 Buttgereit breaks new ground in the horror genre by presenting the story from a feminine perspective. And because we view the film through Monika’s eyes, her twisted necrophiliac perversion is presented as perfectly normal (and this is helped tremendously by Monika M’s gutsy performance – she also contributed to the music score). Early on in the film when she laboriously digs up Rob’s body, Buttgereit films a bird’s eye in close-up as it gazes down on Monika’s immoral actions. The bird’s eye represents us the viewers, the judgemental voyeurs gazing at a transgression over which we have no control. And with scene we witness a cinematic first – a woman stealing a corpse from a graveyard for her own sexual gratification. The body could be mine or yours, and just like Rob’s body and the observing bird, we are completely helpless to do anything about it. 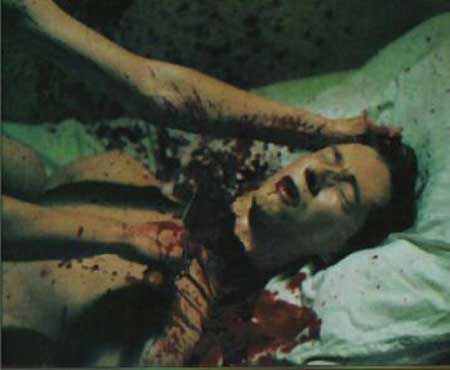 Shot on 16mm but looking superb on the BD transfer, Nekromantik 2 is at once a detailed exploration of outsider love and one of the most disgusting and provocative horror movies ever made. It’s a masterpiece of horror, but one that is all out to grate on viewer sensibilities; and for this reason it’s not a film you could watch over and over again like Repo Man or Evil Dead II, but you’ve probably gathered that anyway. Like its predecessor, I’ve only ever seen this movie once (even though I own both films on DVD), and that’s the way it will stay. 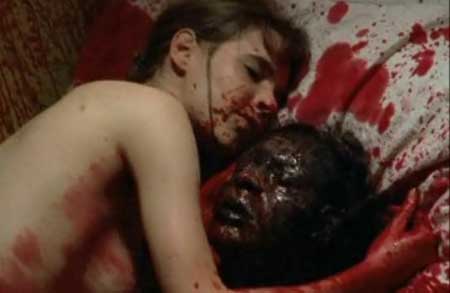 In June 1991, Nekromantik 2 was deemed obscene by the German authorities and the Werkstattkino cinema was raided by Munich police who had been ordered to seize the print. Director Jorg Buttgereit was facing a custodial sentence, and even the projectionist was threatened with jail for screening the film. The police had a warrant for the film’s arrest, apparently, but thankfully someone had the presence of mind to sneak out of the back door with the film cans, leaving the police unable to locate it. If the negative had been discovered it would have been destroyed, but fortunately it survives. I think little incident speaks volumes about how rigidly closed-minded some people can be when it comes to provocative art; the attempts to destroy the film were eerily reminiscent of the Nazi book burnings of the 1930s, the fascistic purging of ‘degenerate art’ and literature that didn’t sit right with the status quo. The film is still banned in Germany to this day.

Nekromantik 2 is now available on bluray per Cult Epics