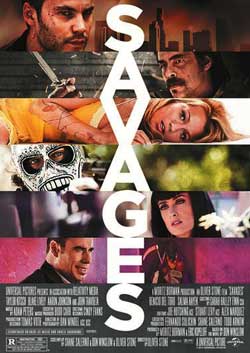 Pot growers Ben and Chon face off against the Mexican drug cartel who kidnapped their shared girlfriend.

Director Oliver Stone has given us a wide range of fantastic films over the years (I shan’t bother mentioning all of these because it would simply take too long!), and although I enjoyed watching Savages, I don’t think that it is up there with his other greats. This action/drama/thriller takes the audience on one hell of a ride though and I thought that the plot was a pretty gripping one – ok, so it wasn’t all that believable, but I was still interested enough to see how things were going to play out. 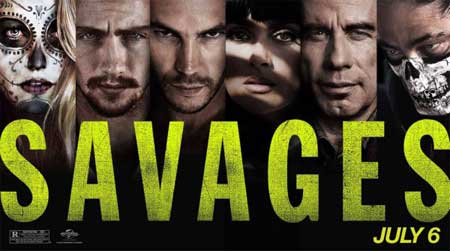 Savages introduces us to three characters Chon, Ben and O (short for Ophelia) who are living a rather content life growing their own premium marijuana and selling it on to their select band of clients – no fuss and no hassle involved. The three of them share a mutually loving ‘three-way’ relationship, and, unconventional though it is, it works for them. But then a Mexican drug cartel move into town and demand that they become partners with them, and Chon and Ben decide that it all sounds like risky business, they want out! By saying that they need to think about the ‘offer’ some more, the three of them decide to just split and go somewhere nice to just relax for a while, and keep a low profile. However, the Mexican organisation is no fool and they find a way to get a bargaining chip to control them – they take O and hold her prisoner until Ben and Chon agree to partner with them. This volatile situation only gets worse as the two boys attempt to even things out in their favour, and a kind of war develops between the different sides. Many people get involved, and not all of them live through it to the end. The question here though, is will Ben and Chon manage to rescue their beloved O? 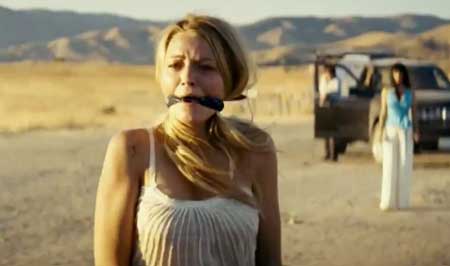 Whilst watching Savages, I was reminded of several other films, with just a few things taken from each one. There were elements of City of God, which was a Brazilian movie revolving around dealing drugs and how this affects people’s lives (usually for the worst). There’s a voiceover in both Savages and City of God, which is used as a useful tool for explaining events and what situations led to this moment in time so that the audience is given some context to what is going on. Similarly, I thought that connections could also be drawn to Tony Scott’s Domino (because of the highly colourful visuals and the fast paced camera-work), Pineapple Express (because it is essentially the tale of two drug dealers who end up way over their heads) and even Quentin Tarantino’s Jackie Brown (because the characters are all interwoven and sometimes it’s hard to tell who is really on whose side). I reckon that if someone were to put all of these films together in a blender, the end result would be Savages – a film about love, friendship, aggression, desperation and the lengths that people will go to in order to save/protect the one(s) they care about. 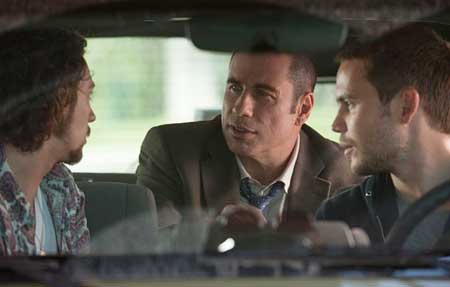 A definite flaw which I found with Savages, unfortunately, was that the relationship between the three main characters didn’t really ring true for me. I don’t know if it was just because it wasn’t given enough screen-time, but I really can’t see how it worked, and there’s no way that a situation like that would ever be possible in real life. No one got jealous and no one tried to backstab the other – what kind of drug dealers are they? I think that, considering the fact that the entire film hinges on this relationship, there should have been more explanation and depth behind it so that the audience can understand how important it really is. 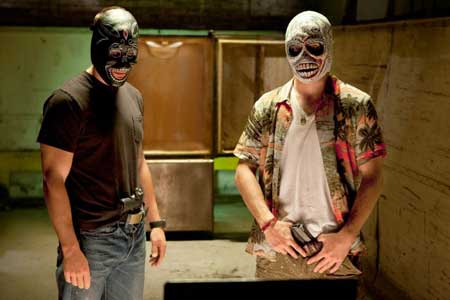 There are a few gory scenes here, but what with the ‘adult’ premise of Savages (perhaps the name of the film should have been a giveaway) it is definitely not one for the whole family anyway. And besides, I would expect nothing less from this kind of drug ‘war’ – violence is something of a necessity in these storylines! We get lots of gun-use and there’s also some beheadings and a guy getting set on fire. Nasty stuff indeed. In addition, there are a couple of sex scenes near the start of the movie, but we don’t really see any nudity at all, which is surprising. If I was in such a hot part of the world, I think I’d be walking around naked just for comfort’s sake! 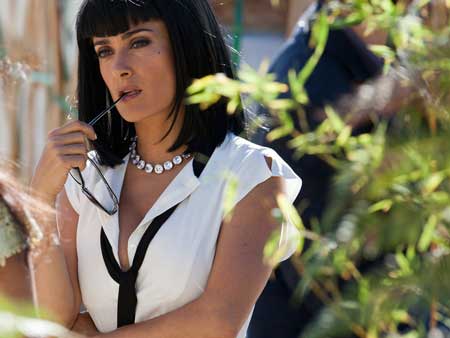 The ending was kind of weird for me and seemed to be something taken directly out of a Michael Haneke film, especially Funny Games (the original and the remake). Here the character picks up a remote control and reverses time so that he could change what happened, and similarly, in Savages, an ending is played out only for it to be reversed and we are then given the ‘real’ finale. I’m not sure that I liked this as it appeared rather out of place and didn’t flow with how the whole film had progressed. I know Savages wasn’t completely linear and used flashbacks and black & white shots and fast paced images flashing before our eyes, but the ending still felt a little odd and ‘plonked’ on. It was weird. And not the good kind of weird. 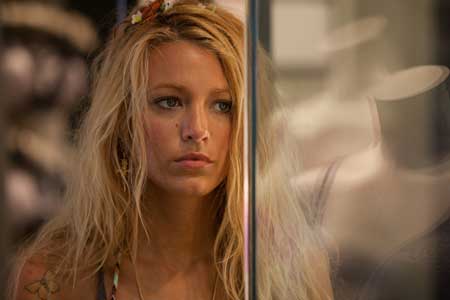 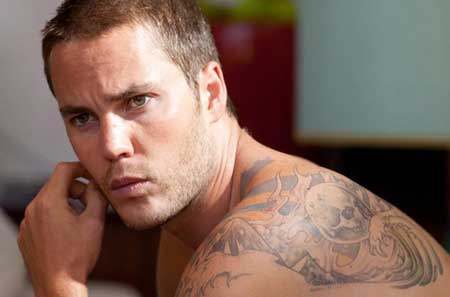 When all is said and done, I did think that Savages was an exciting film to watch. The frenetic handheld camera-work and the stylistic cinematography used helped to create a really awesome experience. I personally felt that there were good performances all round, especially from the select amount of famous faces that came up – John Travolta, Benicio Del Toro and Salma Hayek. It is apparently based off a book (although in an interview Oliver Stone said that he was more ‘inspired’ by the book and so it’s not actually a faithful adaptation!) and having seen the film, I would definitely be intrigued to give the novel a read. Savages is a fairly long film, but if you’ve got the time, you certainly won’t find yourself bored whilst watching it!