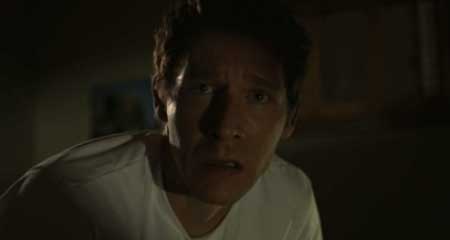 This is a beautifully shot film, which uses light and darkness very effectively to create an ominous atmosphere from the very first minute. The silhouettes and perfectly brooding mood are addictive to watch and I felt myself compelled to see where it was leading. The way light was used reminded me very much of the old days of film noir, where light played such an important role (almost like a character itself) in how the film was told. It meant that even from the first frame, we are already aware that the main character is in a dark place (in this case, literally as well as figuratively). He is a broken man, a man who has lost all hope, a man consumed by negative emotions. The audience feels a connection with him from the get-go, and he manages to carry the entire film himself. Hats off to the actor (Stephen Twardokus), that’s all I can say.

The story begins with a man visibly upset, clearly consumed by some inner turmoil, slowly getting dressed, yet with an utterly wretched expression on his face. The viewer becomes intrigued to know what happened to this man, why does he feel so low. It is not until the very last shot that we are finally able to put all of the pieces together, in a truly horrifying revelation. The Unforgiven really was harrowing to watch, and is one that is able to linger on the viewers mind for a while afterwards. Well, it did for me at least.

This film manages to be horrific in a very different way from the conventional standards. So there’s no blood or violence or weapons or monsters or supernatural beings of any kind. The Unforgiven is a film very much set in the real world, about real tragic instances which can and do occur. It is for this reason that it chills me to the bone like no slasher or zombie or torture film ever could. I find it hard really talking too much about this film, because I feel that giving away anything but the bare minimum would ruin it for any future viewers (although perhaps the title might offer a little hint about what the film entails). Just heed my advice and go and see it! I insist.

Overlay and focus techniques were used effectively, making the visuals of such simple things seem so important and loaded with meaning. This fits so well with the general storyline that I really can’t help but admire the work and effort that went into drawing all of the different elements together to make one glorious package. The static camera and constantly lingering shots force the viewer to witness the character’s pain. It’s unflinching and unforgiving. It almost appears as a documentary, featuring a man at his darkest moments, the moments that he doesn’t want anyone to see. In that respect, one could argue that The Unforgiven could also be a statement about modern society and the heavily surveillance that is present. There’s a lack of privacy today which this film amazingly captures – but after all, it’s human nature. We can’t help but look at that train wreck as we drive by.

I thought that The Unforgiven was a neat little film based around a good solid idea. It was very short, but this was really all that it needed to be – dragging the story out needlessly would have negated the power and impact that it had. A last interesting point to mention would be that there’s not one single line of dialogue in this film. This film works rather like a punch in the gut, but isn’t that what all great films should be!