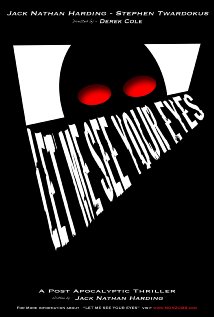 It’s ‘every man for himself’ in this post apocalyptic world, where a biological mistake has turned most of the population into animalistic eating machines.

It’s after the end of the world. Remember everything they told us in the 80s about how horrible it would be? Yea, they were being kind, actually. In this world, it’s far worse than anything MTV could show us…and without the cool dance score.

This is  Let Me See Your Eyes, a short film that focuses on R.J. (played by writer Jack Nathan Harding) as he navigates the fall of civilization. Three years into it, R.J. is doing quite well for himself. He has a nice secure hidey hole, with food and fresh water, and all the Louis L’Amour novels he can read. (Look him up. I can’t do everything for you)

Yes, our hero is pretty comfortable in the apocalypse. Until he gets a knock on the door.

See, the rest of the human race has apparently become cannibalistic monsters. So one does not simply open their damn door because someone knocks. But R.J. does, and in runs a young man called Sorrel (Stephen Twardokus), desperate for help. Our hero lets him in, of course. Like you do. But what exactly is this young man doing out in the open upon the vampires of humanity?

Well, that’s the question, isn’t it? And that’s where the conversation between the two men begins. As they get to know each other, the truth is revealed about both of them. And believe me when I tell you this ain’t no buddy picture.

I was very excited to see Jack Nathan Harding on the credits, as I know him best from Mega Python vs Gatoroid. But he has a lot more credits than that, appearing in almost every TV show made in the 2000s. Mr. Harding has his hands all over this film – he wrote the score, and produced, and even handled the set design.

He did not, however, direct. That was done by Derek Cole, a man who has worked on a lot of projects. These include tv series such as Scare Tactics and Battlefront. He was even a production coordinator for two Robbie Knievel specials. Mr. Cole was also the cinematographer for this film.

It looks great. It’s acted great. it’s difficult to carry twenty minutes with just two characters in one room, and they really pulled it off. I could really see where experience in live theater payed off for this one.

So rating with my special “short scale” on a scale of one to five (five being awesome), I’m giving this film 4 tea bags.