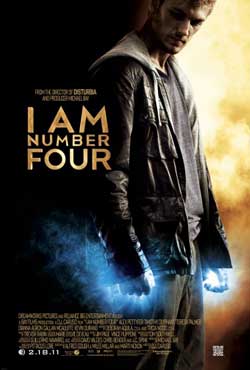 Aliens and their Guardians are hiding on Earth from intergalactic bounty hunters. They can only be killed in numerical order, and Number Four is next on the list. This is his story.

Director D.J. Caruso, who brought to the big screen some pretty decent movies like The Salton Sea, Disturbia, Taking Lives and even directed episodes of Smallville and The Shield, delivers a sci – fi “lite” tale that is not a complete disappointment  but is quite unsatisfying on a few levels. It’s a movie that strives to be as mature as it can be, story-wise, but suffers by appealing to to the “Tween” demographic in many places instead. I say it suffers because whenever the material takes a step or two in the right direction it takes two or three backwards by turning the movie into a “Twilight” with some alien bounty hunters in the mix. That might be good in some ways since the “Twilight” demographic is quite large and maybe Caruso wanted it that way but I can’t help getting the impression that the movie wanted to be more than what it delivered. It demonstrates that on the surface it can be an interesting teen sci fi drama but it just migrates into repetitive territory about the discovery of the protagonist’s super powers that echoes a Spider Man movie. Add to that some all too familiar sci fi booms and bangs that are ok to watch but comes across a bit pedestrian and uninspired. Let’s start at the beginning and get to the meat of the story though. It isn’t ALL bad… 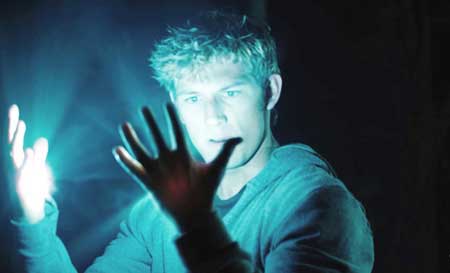 Alex Pettyfer (Magic Mike and In Time) plays John Smith, an alien from the planet Lorien. He and his guardian Henri, played by Timothy Olyphant (Live Free Die Hard and The Crazies) are hiding on Earth from some nasties called “The Mogadorians” They are a conquering race that eventually find out about some Loriens taking safe haven on earth and when they appear, it seems that the Loriens can only be eliminated in numerical order. The film begins with the hunt and elimination of Number Three. Kevin Durand (Legion and X-Men Origins Wolverine) plays the leader of the band of space bounty hunters after the Loriens. They trace the whereabouts of Smith and Henri in Florida forcing them to move but not before during a get together with friends at the beach, John’s powers (called Legacies) begin to manifest themselves. John’s hand begin to emit light matter or plasma and he begins to show signs of enhanced strength and agility. Unfortunately, John friends start to immediately shun him all the while feeling unsafe and curious about him. Reluctantly Henri gets John to move with him to another location where they will be safe and one step ahead of the killer Mogadorians. They eventually end up in Paradise, Ohio and start a new life. Here the films starts to show it’s weaknesses as it turns into a juvenile ‘Coming of age” tale about teen angst, discovery and relationships all in all too familiar territory like the ‘burbs and high school. 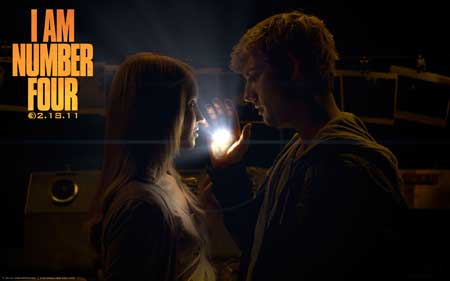 Henri advises John to lay low but in true fashion he can’t because he finds the prettiest girl in the school and falls for her. Dianna Agron (Glee) plays amateur school photographer, Sarah and Callan McAuliffe plays John’s new buddy, Sam. Now Sam is actually a decent character and he supplies some meat and humor to the movie during some very dull moments. Sam is quite the conspiracy theorist and he fits right in during the wackier moments of the movie. Sam of course has a jock ex-boyfriend named Mark (Jake Abel from Supernatural and The Lovely Bones) who tries to play a bit of a Halloween prank on his ex by taunting her and John in the woods. While this goes down John fends off the guys by using his “Legacies” This gets John in deep water with the locals, the Sheriff and even Henri who is getting unwanted attention from the fuzz. 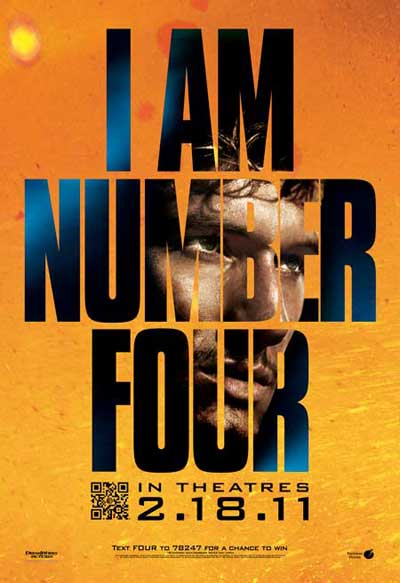 The Mogadorians are close behind and thrown into the mix is another Lorien tailing the alien bounty hunters. This Lorien, named simply Number Six is played by actress Teresa Palmer (The Grudge 2). She is yet another interesting character that is never quite fleshed out or really developed. Her on screen presence is smooth and physical but at times she seems like a bit too much too late. I, though, at times welcomed her scenes because she has a few really cool action moments in this movie. Her guardian was killed off and she eventually gets around to locating John but at the same time the alien baddies do. Plus, Henri is ready to pack up and leave putting John in a predicament because he is intent on becoming an “item” with Sarah. They share some touching albeit corny scenes that establishes that the story is indeed trying to show and display some heart and depth. Sometimes it works and sometimes it bottoms out with cheesy sentimentality.  Agron is natural and pleasant to watch though. 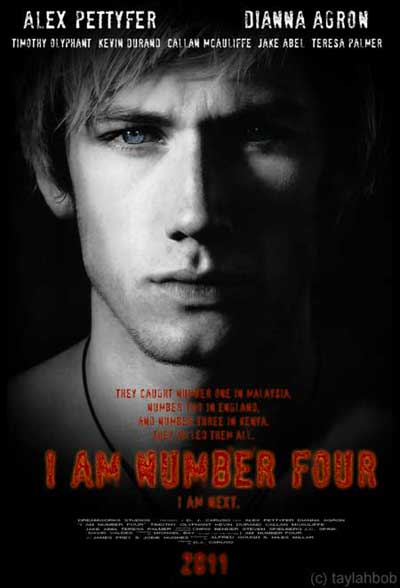 So, they baddies catch up with John, Henri and Six and cause some major damage to the school and the school grounds. They have some mean ass alien pit bulls that are quite monstrous and deadly. They also get some locals to help out with tracking down John by using his friend, Sam’s theorist  Dad and his friends. Where does it all go from here? Well, it unfolds nicely in scenes but the movie reeks of being just ordinary. Almost like a TV movie of the week where everything that takes place is very “safe” and not too dangerous. I never felt for a moment that John, Henri or Sarah were in any trouble and the inclusion of Six seemed forced and trite.

It is a bit of sci -fi fluff that is never daring and everything is really done by the numbers and done too conveniently. I wouldn’t recommend anyone expect this to be a masterpiece but I did want it to succeed way more than I should have. I felt it had some merit like Olyphant and Number Six. The movie demonstrates at times that it is capable as a sort of bored version of a Twilight movie with some guts and aliens. The villains aren’t very villainous or captivating. I Am Number 4 can be intriguing but it never stays interesting. I enjoyed what Caruso does with the peripheral characters more than the other players. Olyphant is capable and great to watch. His paternal instincts and charm are a welcome addition to the way the tale plays off. His presence is a definite plus for the movie. Two other positive things  are Trevor Rabin’s (Hot Fuzz, Deep Blue Sea and Snakes on a Plane) score which is resonant and powerful. Next is Guillermo Navarro’s (Pacific Rim, Hellboy and Pan’s Labyrinth) awesome photography on the film. It is great to look at with deep colors and beautifully framed and composed shots. Navarro’s action set pieces are done with vibrancy and solid execution. 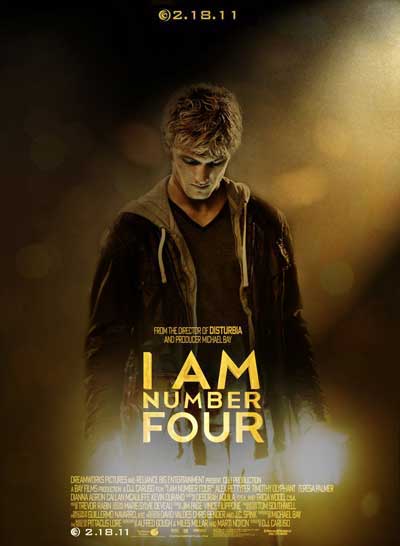 Unfortunately, I Am Number 4 is just too average for me to really recommend. It has way too many shifts in tone and story. It is at one point an interesting sci-fi tale that suddenly shifts to a Tweenie love story that is too saccharine to digest. The characters are cliche and the sci-fi action is standard and quite routine, too. When it tries to, it works but then after we are forced fed sappy dialog and Twilight-ish moments, what little of good intentions the movie has at the end is way too little too late. It’s good for a one time watch for those who are very curious or those who have nothing else to watch on a rainy Saturday afternoon.