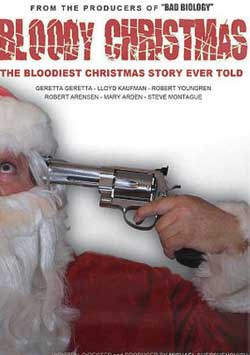 Police are searching for a child murderer in a small town. Meanwhile Rich Tague a former 80’s action movie star, is attempting to figure out the meaning of Christmas as he plays Santa on a Public Access T.V show & at the local mall. He fantasizes about murdering everyone that has crossed him. Can he resist his sinister urge to slay innocents on Christmas?

I’m not all that much a fan of Christmas for personal reasons but I do dig a nice X-mas themed slasher flick. I approached “Bloody Christmas” with a heaping dose of trepidation since I seem to be the red headed stepchild who gets all the leftover crap that no one else will review here at Horrornews.net. This last series of films I was assigned to review have been the equivalent of what’s available on cable in the 9th circle of hell but although I am battered & bruised beyond recognition, still I sit and watch this stuff so you don’t have to. 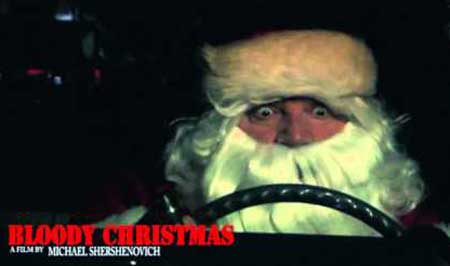 Directed and written by Michael Shershenovich, “Bloody Christmas” is the story of Rich Tague, a down on his luck former action star who’s found himself playing Santa on a small public access channel and in a local mall. Steve Montague plays Tague in an especially downbeat fashion & he does manage to wring some pathos out of the role although the script goes out of it’s way to make his situation especially overwrought & depressing. During a filming session for the TV show Tague imagines that he’s slaughtering all of the cast & crew with a handgun because of his personal troubles. He also envisions murdering the manager of the mall after he gets unexpectedly fired.

Poor Rich manages to drive home in his car although it only starts when it feels like it but he finds an eviction notice posted and despite having his last paycheck in hand he can’t cash it right away & his landlord refuses to cut him any slack until he can cash it so he’s locked out of his trailer as well. It’s looking like a really lousy Christmas for Rich but it’s looking even worse for Father Michael (Robert Youngren). His plans for his congregation are slowly falling apart as they begin to change their plans one by one and leave him without a flock to preach to on Christmas eve which doesn’t leave him in too good of a mood either. And to make matters worse, someone is offing the neighborhood children and the local law enforcement doesn’t have any leads as to who is responsible. Is it our extremely depressed & angry at the world Santa or maybe it’s Father Michael who is slowly coming unhinged over the loss of his flock. Maybe it’s someone else I haven’t even mentioned yet? One thing is for sure though…Santa and Father Michael are sure to run into each other at the most inopportune moment, and it ain’t gonna be pretty. 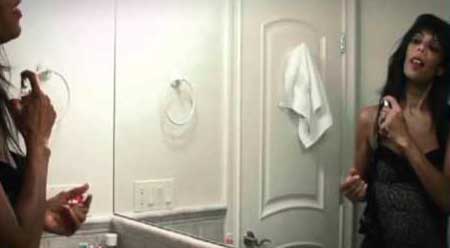 It all sounds good on paper but it loses a lot in it’s execution. I suppose the idea was to make “Bloody Christmas” look like a grindhouse flick of the 70’s and that idea is a bit shopworn by now so if you’re gonna make an attempt at it then you better make it a good one. The film stock is degraded and brown looking with all of the expected scratches & bits of human hair staining the screen. But the production itself is an extremely low budgeted one so it already looks sort of seedy, it didn’t need any faux enhancements to grime it up. The narrative seems to be off as well. It all begins with a comely woman (The lovely Geretta Geretta of “Demons” fame) who is getting herself all pretty for what looks to be a night on the town but after her makeup is just right she sits down in a half filled bathtub and slices her wrist. Yet she turns up later on in the film as the mother of one of the murdered children! The film lurches from past events to current events without letting the audience know it and although it’s never a bad idea to start a movie with someone who looks like Geretta Geretta, it’s kind of a waste of her talent and our time if you don’t explain why she’s doing what she’s doing until 1/2 of the movie has passed. I really was confused for awhile because the film starts with a suicide and doesn’t even try to explain why this was happening and then moves on, completely forgetting how it began. Forgetting or ignoring it because as I said a few lines ago, it’s nice to see a beautiful woman as the first image of any film.

There are some lousy stop motion effects that just make the film look more amateurish than it needed to look and none of the actors (Save Geretta & Montague) have done their acting teachers proud with their performances here. But the film is watchable in a sleazy, perverse way and if it went a little further in that direction there might have been something to talk about here but the script skirts the edge of sleaze, it only dips it’s toes in the water when it should be diving in wholeheartedly. It ends with a confrontation between Santa and Father Michael that was just OK. It didn’t have the action that I thought it would. The special effects make up are really lousy too but I can’t figure if they were lousy on purpose or not, I hope it was on purpose cuz’ if someone actually paid someone else to devise the makeups then they got jobbed big time..

So “Bloody Christmas” gets a “Meh’ from me overall. It’s definitely bad yet it’s sickeningy watchable at the same time. Proceed with caution…