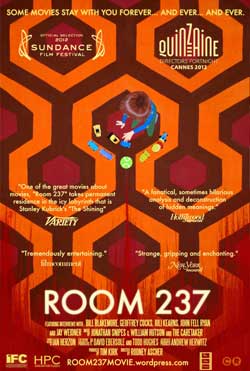 A subjective documentary that explores the numerous theories about the hidden meanings within Stanley Kubrick’s “The Shining”. The film may be over 30 years old but it continues to inspire debate, speculation, and mystery.

A favorite question of mine whenever I meet someone new is “What’s the scariest movie you’ve ever seen”? I as this often during interviews as well & it’s amazing how often Stanley Kubrick’s “The Shining” is mentioned. Apparently it’s scarred the psyche of more than a few genre stalwarts over the decades and I’m sure it will continue to do so in years to come. I don’t like the film though, never did. I found it stuffy, boring & annoying to boot and I still feel the same way about it today that I did in 1980 when it was released. I bring this up because one of the people espousing on the myriad mysteries behind the film comments that when he first saw it he found it to be “Disappointing” yet he returned to it every few years and wonders why is the film so attractive to watch despite not liking it? I own the film despite my distaste for it & also find myself watching it again every so often…but why? 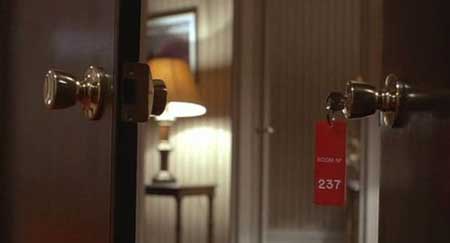 There are five people featured in “ROOM 237” (Never seen, only heard) who are giving their interpretations of what they believe are hidden messages that Kubrick tucked away into his film. John Fell Ryan, Bill Blakemore, Jay Weidner, Juli Kearns & Geoffrey Cocks are their names and they all have ideas about what “The Shining” is really about. Now I’m not a Rhodes scholar or anything like that but I was pretty sure that it was a horror film based on a novel by Stephen King. Little did I know that I was watching a film about Nazi Germany & the holocaust, the fake lunar landing, the slaughter of the American Indian by the wicked white man & some deep seated sexual hangups…all mashed up into one! 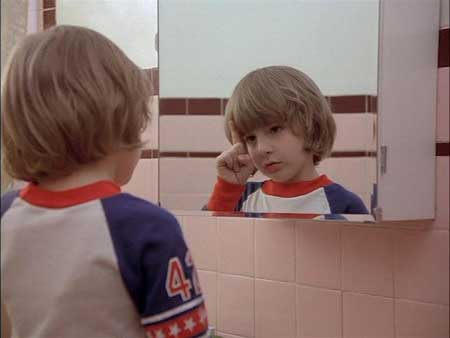 My first impression of all of this is that these people have way, way to much time on their hands and idle hands are the devil’s workshop aren’t they? What drove these five individuals to obsess over this movie like this? I will admit that I had no idea about the cult that has dissected the film over the years but this film didn’t make me want to look them up & see what else they’ve deciphered from “The Shining”. There are theories brought forth here that made my head spin like I had just finished off a gallon of Mad Dog 20/20 (And that’s not a good kinda spin either). Let’s take the whole “Plight of the American Indian” for instance. It’s theorized that because of the prevalence of cans of Calumet baking powder and the way that they’re positioned on a shelf that Kubrick was referencing the way the Indians were driven from their land by the white devil. This theory is bolstered by the fact that the Overlook hotel was built on an Indian burial ground between 1907-09. The cans of Calumet (an actual ghost town in Colorado) have an Indian head logo on them and they seemed to be positioned with the heads facing in a particular direction & there are lots of Indian artifacts & pictures all over the Overlook so….

I neglected to mention the blood pouring out of the elevator being the blood…Of all those long buried Indians!

How about the prevalence of eagles throughout the film? The typewriter used in the film is an Adler typewriter (Adler=Eagle in German) and we all know that the eagle was a symbol used by the Nazi’s…right? There are lots of eagles on display if you look close enough so there has to be some sort of correlation…right? How about the number 42? The Nazi slaughter of the Jews began in 1942 and there are 42 cars parked outside of the hotel, “Summer Of 42” is playing on the TV being watched early in the film & if you multiply 2X3X7 you get 42 so…. 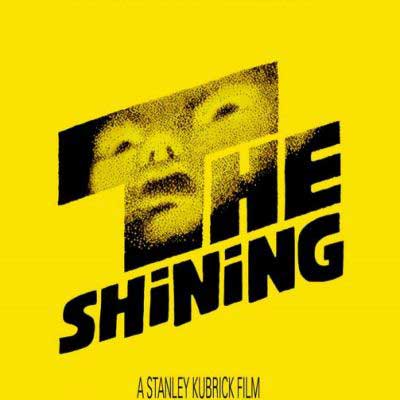 I neglected to mention that the TV has no power cord running from it…yet it works!

What about man’s first moon landing? Didja know that Kubrick was behind the staging of all that? Oh yeeah, he did such a bang up job on “2001: A Space Odyssey” that the government hired him to fake all of that footage from the moon. It was all of that pioneering front projection technique that he used that convinced the US that he was the man for the job. But Kubrick had some regrets apparently and “The Shining” was his way of admitting he was part of the hoax. How else could you explain the “Apollo 11” sweater Danny is wearing in one scene? Or the fact that you can spell the word “Moon” from the words “Room No. 237”? Explain that coincidence why don’t cha?

I neglected to mention that the moon is exactly…237,000 miles away from earth!

I can do this all day long. But I will admit to having noticed something that’s mentioned here, that being the amount of luggage the Torrance’s bring along with them & the fact that it couldn’t possibly have fit into that tiny little VW Beetle they drive. Just look at the mountain of luggage that they bring with them & look at their car! Here I was feeling all smart for a second when the movie trumped me by pointing out what that scene slow fades into & the exact positioning of that pile of luggage in regards to the next scene. Who the hell notices this stuff? 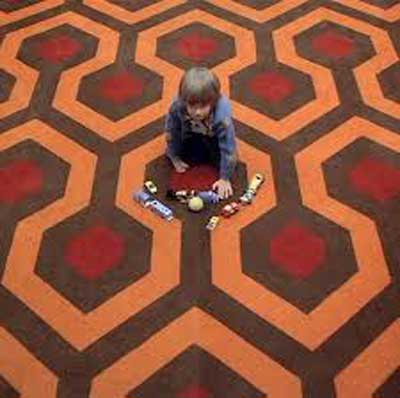 I neglected to mention Kubrick’s face is seen in the opening credit sequence…superimposed in the clouds!

Don’t knock yourself out looking for it though. I sure as hell didn’t see it & I felt like an ass for getting up close & trying to discern where his face just might be hiding underneath all of those billowy fields of cumulus…really hurt my eyes too. There are so many theories bandied back & forth here that whatever fun anyone had in watching “The Shining” is just killed away by what these people say is really happening behind the scenes. It’s gonna be real hard to watch it again & not wonder why a poster in one scene isn’t of a man on skis but of a Minotaur on the rampage (Juli swears that’s what it is).

I neglected to mention that at the end we get a taste of “The Shining” being played forward & backward on the same screen…at the same time! (Don’t be too quick to knock it though. the few examples we get of it kinda work in a really trippy way that can’t just be coincidence…can it)?

“Impossible” windows, wonky architecture, carpet patterns, disappearing chairs & stickers, labyrinths, familial breakdowns, the existence of Bill Watson, succubi, Playgirl magazine, Colorado & it’s history are all pointed out in excruciatingly precise detail and while I’ll admit to wondering about a few of them (That carpet pattern bit is pretty heavy) I refuse to believe that Kubrick had some master plan as he made his film. As smart as he was he wasn’t immune to continuity foul up’s from scene to scene, what director is? 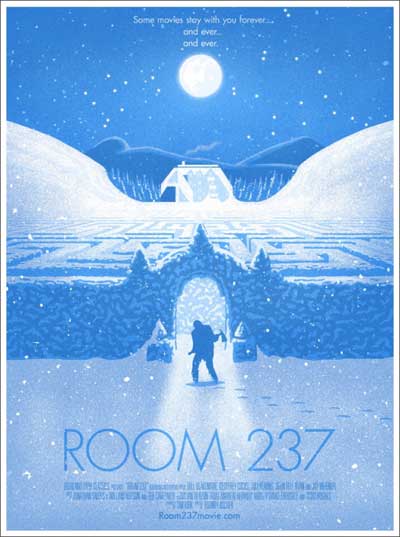 Director Rodney Archer does a perfect job of letting these voices describe their “Discoveries” and they all sound like they really believe their shtick too. He uses clips from films as varied as Lamberto Bava’s “DEMONS” to “DR. DOOLITTLE” to help move the proceedings along and the variety of clips manages to entertain. Original music by William Hutson & Jonathan Snipes is unobtrusive & a few of their clips sound as if they were inspired my Morricone’s “THE THING” score or any given soundtrack cut from Italian maestros GOBLIN & that can’t hurt. But in the end I just can’t take any of these shenanigans seriously. When it was all over I couldn’t help but think of the tagline of the film’s poster: “Some movies stay with you forever & ever & ever” and I felt a tinge of pity for these guys. I know it might sound pretentious of me but I like to think that I have better things to do than obsessively scrutinize each & every frame of any movie let alone this one. 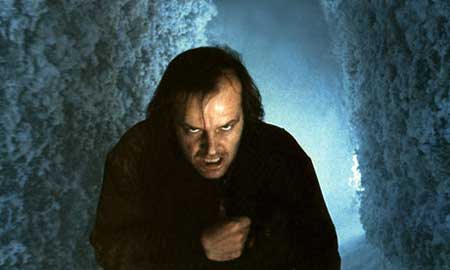 If you’re into conspiracy theories & such then “ROOM 237” is right up your alley. If you’re not but are a fan of “The Shining” then you might enjoy some of this film but tread carefully if you don’t fit into either of these categories. You’re gonna go stir crazy after the first 30 minutes or so…I guarantee it. Overall I liked it though it’s so c**kamamie cuckoo that it plays better as a comedy than anything else.

Now if you’ll excuse me I must be going. I’ve decided to pop my favorite Kubrick film (“BARRY LYNDON”) in my PS3 and obsessively count the number of times Ryan O’Neal lapses back into an American accent & then figure out how it all ties into Jimmy Hoffa’s disappearance.
I know there’s a connection there somewhere…