Troma Entertainment has signed Los Angeles writer Collyn McCoy to ink The Toxic Avenger 5: TheToxic Twins,the 5th iteration of the iconic Toxic Avenger series of movies. McCoy came to the attention of Lloyd Kaufman, President of Troma Entertainment and Creator of the Toxic Avenger, by a chance meeting with Josh Olson, the Oscar-nominated screenwriter of A History of Violence at Gremlins director Joe Dante’s office where both were filming segments of Dante’s webseries “Trailers from Hell.”

“Collyn’s unique talent will do more than justice to Troma’s 35-year, no-compromises legacy of sh*t-disturbing movies of the future!” said Kaufman. “His script will undoubtedly be 100% Grade-A Troma!” McCoy’s recent script THE HIGH LIFE (with co-writer Jacob J. Mauldin) is currently being produced by Route One Films, a new film company recently formed by Troma alum Jay Stern and Chip Diggins. 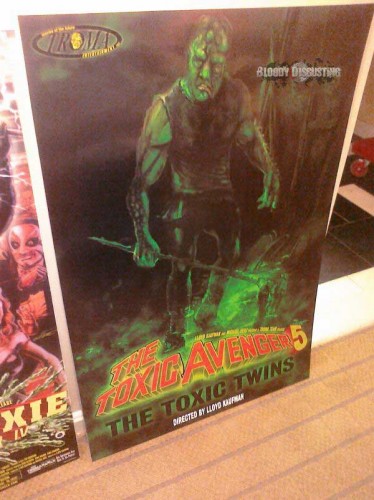 THE TOXIC AVENGER is a seminal film in American film history, and has clearly influenced and inspired many of today’s mainstream directors, such as Trey Parker, Eli Roth, James Gunn and Quentin Tarantino. It is perhaps the most beloved title of Troma Entertainment, one of the longest running independent film studios in history (36 years). Since his introduction into the film world, “TOXIE” has become the definitive youth-oriented “cult” monster hero, and is recognized world-wide. Among its many iterations, THE TOXIC AVENGER has spawned a hit off-Broadway musical, Marvel comic book series, four film sequels, a popular Saturday-morning cartoon show, action figures, video games, and is currently being remade into a big-budget, mainstream film by Oscar-winner Akiva Goldsman and his team.

The original 1986 film told the story of Melvin, the Tromaville Health Club mop boy, who inadvertently and naively trusts the hedonistic, contemptuous and vain health club members, to the point of accidentally ending up in a vat of toxic waste. The devastating results then have a transmogrification effect, his alter ego is released, and the Toxic Avenger is born, to deadly and comical results. The local mop boy is now the local Superhero, the savior of corruption, thuggish bullies and indifference.