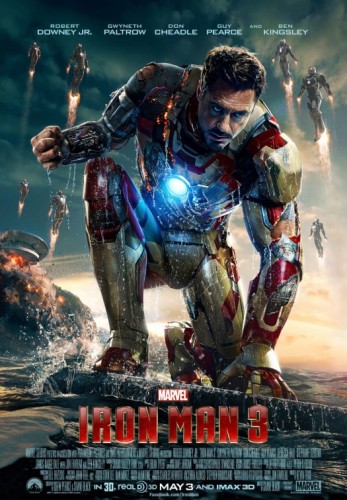 Tony Stark, still dealing with the affects of his adventures in New York with the Avengers, now faces a super villain terrorist called The Mandarin who attacks not only everything Tony owns but everything he is. Stripped of his belongings and his self confidence with only an all-but-destroyed set of Iron Man armor at his disposal and with his closest friends – Pepper Potts, Happy Hogan and James Rhodes – in mortal danger, Tony Stark rediscovers his character, his strength and his purpose to save the world, his friends and himself.

Iron Man 3, directed by Shane Black, is everything the third in a series (and the fourth full appearance of its lead character) needs to be to succeed – and more. It is a rare example of a franchise improving with age, where its third entry exceeds the initial films. Iron Man 3 is pure excitement -with character: a James Bond of superhero movies. It smartly leaves the broader, grander themes of The Avengers behind to concentrate on its lead, Tony Stark. The title may be Iron Man, and the film may contain a virtual army of super hero suits, but the script and its themes are more about the man in the suit than ever before. It could easily have been called Tony Stark 3 instead.

The smart and witty script has Tony dealing with his own personality, his place in the world (now that “gods” have appeared on Earth in the guise of Thor and Loki) and his own mortality. He realizes that he has been wearing more than one mask in his life and that most everyone around him wears their own mask as well. All this is thematically woven into a story based on a popular “Extremis” storyline by Warren Ellis providing Stark and Iron Man with a set of new adversaries in the form of The Mandarin, Aldrich Killian and Advanced Idea Mechanics. Iron Man 3 brilliantly propels its franchise, its lead character and the Marvel Universe into a bold new direction that is exciting, promising and highly entertaining. Bravo. 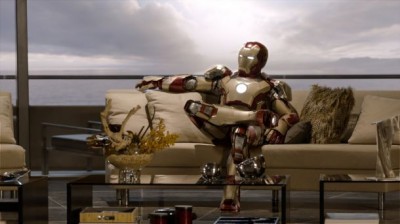 Robert Downey Jr. returns as Tony Stark with all the jovial charm we’ve seen in the previous Iron Man films and the Avengers. However, the character has matured, changed by the near death experience in New York, in the worm hole he barely escaped in the Avengers blockbuster. The world around him means more to him now; Pepper Potts is the most important thing to him, the thing he cherishes more than himself. This is not something Stark is familiar with or adept to. His playboy days are behind him, but the playboy in him still lives. This change in his character is brilliantly displayed and contrasted in the opening sequences set on New Year’s Eve 1999 where Tony meets two scientists, Aldrich Killian and Maya Hansen, inadvertently shaping both their lives with his carelessness for others. When the film shifts back to the present, we find a Tony who cannot sleep, who is having trouble adjusting to his new life and his new perception of his life. This is a fascinating place to find the franchise’s hero allowing him to be humanized without losing the character’s charm. Robert Downey Jr. dives into Iron Man 3 showing no signs of tiring of the role. It’s a welcomed maturity of the character with Downey Jr. giving Tony the perfect balance of serious and flamboyant charisma. 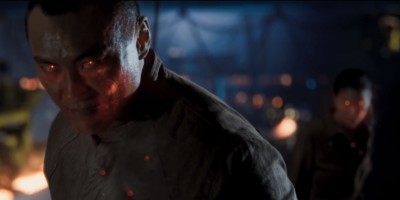 While Tony fights his inner demons, the world faces a larger threat, the terrorist known as The Mandarin (Ben Kingsley) who frequently hijacks the airwaves to take credit for horrific bombings across the globe. While The Mandarin is the face of evil, Aldrich Killian and A.I.M. are the force behind the terror hidden to everyone including Tony Stark and Pepper Potts. When the latest attack involves Happy Hogan, nearly killing him, Tony takes it – and The Mandarin – personal during a press interview, inviting The Mandarin to bring it to his front doorstep, to face him – man to man. Taking Stark up on his offer, The Mandarin destroys Tony’s mansion and nearly killing Pepper in the process. Without his usual tools and weapons at his disposal, Tony must uncover the truth behind The Mandarin, Killian, A.I.M. and the destructive power of Extremis. The film is titled Iron Man 3, but Tony Stark is the hero more so than ever before – he is James Bond in an iron suit. 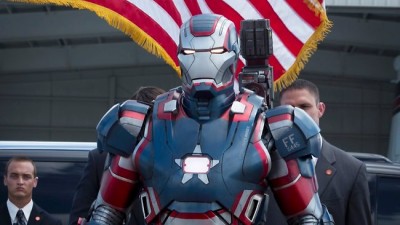 Shane Black strikes a perfect balance between the super heroics and the personal conflict through out the film, even when the action is ramped up the highest spectacle. In Iron Man 3 the quieter moments are as important, exciting and entertaining as the broader action-packed scenes. When Tony is at his lowest, with only a young boy at his side to help him to recover and rebound, the film is at its best and so is Shane Black. To the director’s credit, watching Tony pull himself up by the bootstraps is somehow far more intriguing this time around (he similarly did so in the first Iron Man) because of his relationship with young Harley Keener. Black is no slouch when it comes to the action either. The attack on the Stark Mansion is beautifully rendered, a ballet of slow motion and hyper-kinetic super heroics. The final battle between Tony & James Rhodes against The Mandarin’s Extremis army is as exciting as The Avengers’ finale and will definitely give Whedon something to live up to. Shane Black handles the material, the characters and the franchise as well as Jon Favreau and Josh Whedon have before him, benefiting from their efforts and building smartly upon them but grounding his efforts in the characters, Stark, Rhodes, Potts, Jarvis and even the Iron Man itself. 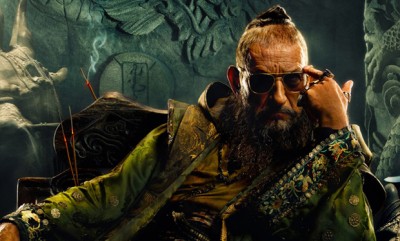 Gwyneth Paltrow, Don Cheadle and Jon Favreau return for Iron Man 3 as well as Pepper Potts, James Rhodes and Happy Hogan respectively. Favreau gets most of the attention up front as he is integral in setting up the story before getting sidelined for most of the second and third acts. His version of Happy in 1999 is hilarious. Paltrow is the perfect Pepper, the shinning star for Stark to follow. She is strong, intelligent, resourceful and funny. Cheadle gets more screen time in Iron Man 3 then he did in 2, or so it seems. Perhaps, it is just more impressive use of the character and the actor. Rhodes manages to stand out as he becomes more and more involved in the plot as it races toward the climax. Once it is just Stark and Rhodes standing side by side with no armor to protect them, the hero in Rhodes explodes on screen – suggesting that a War Machine, or Iron Patriot as he is rechristened for this film, would make for a solid entry for a solo film. However, it is the villains that nearly steal the show. Both Ben Kingsley as The Mandarin and Guy Pearce as Aldrich Killian are sensational, menacing and intimidating without having to go overly grandiose. They are fantastical but perfectly acceptable in the world that the Iron Man films and The Avengers film have built. As much as Pearce lives up to and surpasses the level villainy needed for Iron Man 3, Kingsley outshines Pearce and is absolutely brilliant as The Mandarin perfectly illustrating the themes of the film in the broadest of terms.

Iron Man 3 is the best Iron Man yet. It succeeds so wonderfully because director Shane Black and screen writer Drew Pearce concentrate on Tony Stark instead of relying on pure spectacle to maintain the franchise. They delve into Stark’s flaws, his doubts and his strengths; they allow the character to breathe, to mature, to come to life far beyond just the witty Stark audiences have seen so far. The result resembles a James Bond film dressed up in super hero costumes. Where 007 has his Walther PPK and Aston Martin, Stark has his Iron Man suit – and plenty of them too. Instead of M, Q and a host of agents, Tony has James Rhodes and Pepper Potts. Ben Kingsley and Guy Pearce turn in memorable and formidable villains to the Iron Man franchise and the cinematic Marvel Universe – with Kingsley turning in an inspired performance as The Mandarin. Marvel Studios has struck gold once again showing no signs of slowing down or taking things for granted. With Iron Man 3, they display they have faith in both their properties and their directors (and actors) to steer their franchises forward with forethought, excitement and intelligent scripts. It is an exciting time to be a comics fan, a super hero fan, a movie fan with Iron Man 3 far exceeding all expectations. Highly recommended.