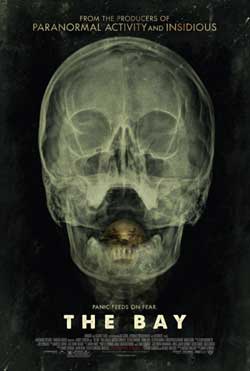 Chaos breaks out in a small Maryland town after an ecological disaster occurs.

Admittedly, when I first heard about a found footage style horror film being directed by the guy who gave us Rain Man, Good Morning Vietnam, and Toys I was a tad skeptical. Certainly Barry Levinson is a great director—he as an Oscar for crying out loud–, but the question that piqued my curiosity was what does he know about horror?? Because I am horror fan and will watch anything horror related and truly am a fan of Levinson’s work, I went into the film with a very open mind and varied expectations. Needless to say, I should have easily trusted Levinson because The Bay is one of the year’s best horror films. 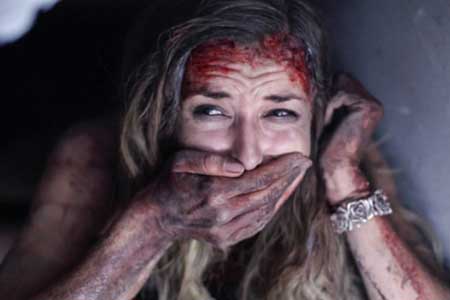 As mentioned, The Bay is told via the found footage style that is saturating the current horror market. However, it is more than, as it also heavily relies on the documentary (mockumentary) style seen in films like Lake Mungo and The Fourth Kind. We see the events unfold from the perspective of a novice reporter who was assigned to cover the 4th of July festivities of small, peaceful, town the bay of Maryland. All is going well with the celebration until a small group of townsfolk abruptly begin showing signs of some mysterious illness; skin rashes, vomiting, hysteria, and intense internal pain befalls many of people. Soon, it becomes apparent that whatever the illness is, it is contagious and spreading quickly. 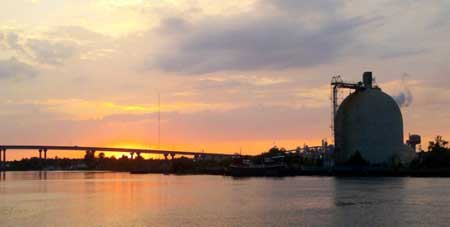 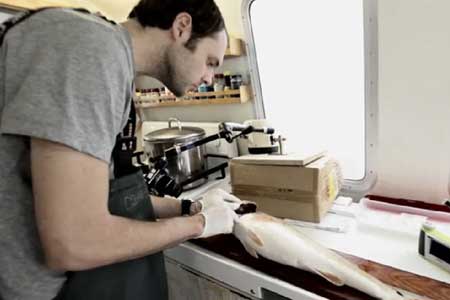 We the audience view the carnage unfold through the lenses of various individuals: the cameraman filming the reporter, spectators filming the festivities, police vehicle cameras, security cameras, and even Skype conversations between medical staff and government officials. As the intensity of the situation increases, we learn through flashback footage and aftermath footage the cause of the epidemic. It seems that heavy pollution in the bay has led to mutant isopods developing. These parasites grow from larva to full grown adult in a matter of hours and consume their prey from the inside out. Perhaps even more disturbing is the revelation of the government ignoring of the town’s cries for help and the massive cover up after the fact. 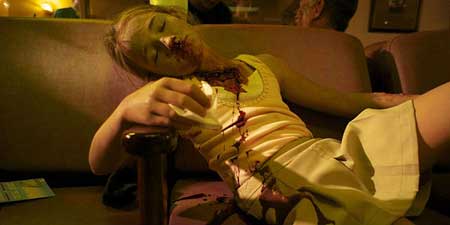 The Bay is a powerful, thought provoking film that will make your skin crawl throughout. In the hands of a lesser director, it could have easily been a convoluted, preachy mess, but Levinson’s skill and knowledge regarding what an audience desires from a film allows it to hook viewers until the last frame. And make no mistake—Levinson knows how to create horror. The atmosphere and tension created in the latter part of the film is breathtaking and there are also some very effective jump scares thrown in for good measure. What I appreciated almost as much is that even though the film does have a strong message regarding our lack of care for our environment and local government’s allowance of corporations to pollute in exchange for payout, it never, ever once becomes preachy or accusatory. The events unfold and we the viewer are allowed to draw our own conclusions about whose responsible for them. There is also a creepy authenticity to the film. It seems one hundred percent authentic. The performances, even from background characters, are strong and believable. The effects are flawless. It truly feels like a documentary, which aids in prying at out comfort levels and gets us thinking about just how possible this scenario is. 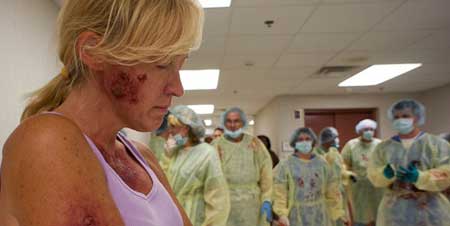 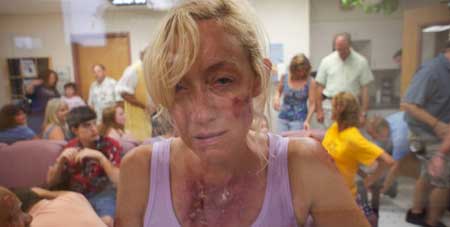 If one were to find issue with The Bay it is that the film doesn’t end with the bang that most found footage films do. By now, there is a certain formula (thanks to The Blair Witch Project) that these films follow. A slow, methodical tense build up to a frenzied, terrifying climax. The Bay, however, makes its big reveal halfway through the film. Once we figure out exactly what is happening, the rest of the film plays out almost repetitively toward a rather underwhelming, albeit thought-provoking, conclusion. Still, The Bay is a must see and is easily one of the most disturbingly realistic and best horror films of the year.