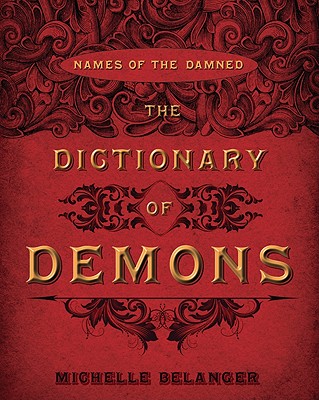 Published by metaphysics publishers Llewellyn Publications, “The Dictionary of Demons: Names of the Damned” is a most curious edition that brings all of the demon names collectively under one volume (though it is noted that it was not possible to include every name ever written in this volume). To historians, this marks a source for reference on which, what and why a particular demon might have appeared in past references. To movie goers, it gives more insight in some of the names that are tossed around in film. A recent example comes to mind in the form of the movie “The Devil Inside” which uses the name of “Berith” without further explanation of why this demon was feared, dangerous or powerful. This book which is described as being a compendium, provides the rich information of demon variations that are collected from a number of obscure sources by author Michelle Belanger. As we study the ways of the old and move into the new age, volumes such as these retain great insight into the studies of old, retaining the work and discoveries of our past.

The practice has long believed that to bind a demon you must be able to summon it by name. I couldn’t think of a better way to reference these entities than a source like this. As is mentioned, a name has power. That power needs to be addressed directly to successfully exorcise a demon.

The author Michelle Belanger begins by giving us a few pages of introduction into this very involved collective. We learn a bit about “The Book of Solomon”, and some of the associated grimoires that exist (then again their are many that may never see the eyes of curiosity seekers locked away in places unknown).

“The Dictionary of Demons” is listed as compiling over 1500 names including a number of articles that deal directly with demonology. As the volume indicates, this is not meant to be a tutorial on demonology, but that one can gain a better “understanding” by reading thru the materials. Each is listed alphabetically with great 1-page articles through-out the book for more specific demon explanations. These include essays on the 7 sins demons, demons summoned by the name of God, sexual demons, names you can’t pronounce, Faust and several more articles of interest.

The descriptions of the demons are mostly kept brief to call them out for who they serve under, their ranking and what dominion they rule over. To clarify, each has reference names included (that might be related or to simply point out different version of their names). The end of the book contains a grid of the Goetic Demons and their accompanying angels and not to mention quite a few decent illustrations included here and there.

What I found thru reading this is that the level of varied demons, their legions they command and the variations over cultural backgrounds is quite exhausting. I would love to see a hierarchal graphic ranking each, but that probably wouldn’t be possible entirely with the origins rooted in different backgrounds.

I did notice that “Pazuzu” was left out, but then I don’t understand enough about demonology to comment as to why.

This book is a must have to any student of the arts, witchcraft, sorcery, or just common interest seeking. I would suggest it as a movie viewer student reference book for digging a bit deeper into the names we are subjected to in film.

Michelle Belanger has done quite a job here worth noting and worth your purchase. I wouldn’t suggest spouting these names out haphazardly, however you might find it as fascinating a read as I have.

Book Review: The Dictionary of Demons: Names of the Damned – Author Michelle Belanger