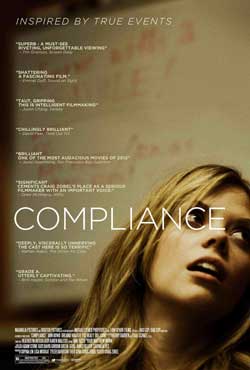 When a prank caller convinces a fast food restaurant manager to interrogate an innocent young employee, no-one is left unharmed. Based on true events.

At a recent screening I attended I got into assorted discussions with various people about films that we’re all waiting for. Lots of titles were bandied about but one title kept coming up over and over again. That title was “Compliance” and everyone had seemingly saw it except for me! After voicing my displeasure to all involved for watching it before me I listened to their opinions and all of them were in agreement. They all felt that “Compliance” was one of if not the best film they’d seen this year. Color me intrigued… 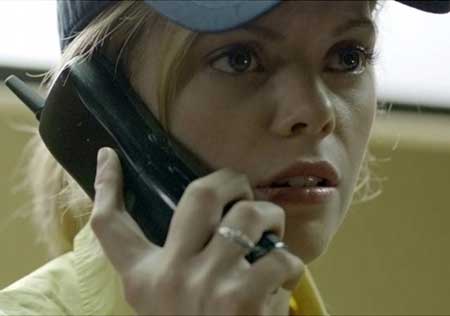 Although not a horror film per se, “Compliance” does recount a horrible situation. A situation that is based on the true story of a manager at a fast food restaurant who falls victim to a cruel telephone prank and manages to drag not only the entire staff of the restaurant down with her but her fiance as well. Ann Dowd plays Sandra, a manager at a fairly non descript fast food joint called Chick-Wich. She seems like a nice enough woman who the staff of the restaurant like working for. As the work day gets under way we meet various members of the staff, among them Becky (Dreama Walker) a young, blond who just wants to get to the end of her working day with no muss and no fuss.

A passer by takes notice of Becky and decides (For no good reason) to prank call the restaurant and tell Sandra that he is a police officer and he is investigating a theft perpetrated by Becky a few hours earlier. He asks Sandra to bring Becky to the back room and allow him to interrogate her over the phone. He then asks Sandra to interrogate her which eventually leads to Sandra bringing in a few of her employees to assist in this interrogation. An interrogation that leads to the utter humiliation of Becky and eventually to Sandra and all involved. 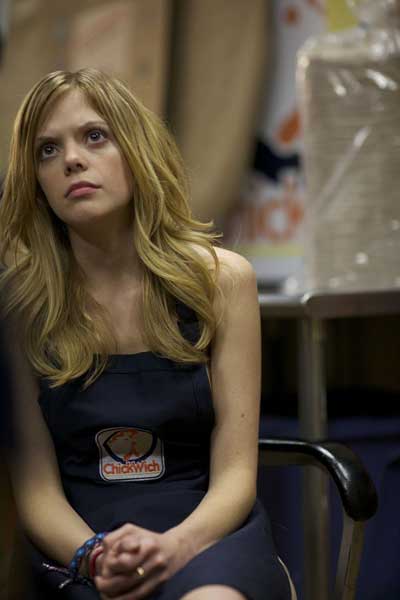 It’s hard to watch a movie like “Compliance” and not have some sort of visceral reaction to it. There were moments during which I nearly yelled at the screen in disgust. Not because there was any blood or violence that might have turned my stomach, rather it was because I found it nearly impossible to believe that any of this really happened. Over and over I just kept repeating to myself that NO ONE could be as stupid and easily led on as Sandra, Becky & the others who fell for this idiocy, yet here they are and as this was not only based on a true story (This prank has taken place over 70 different times according to the film) I can only bow my head in shame at the gullibility of my fellow man.

Understandably there are those of us in positions of authority (Tenuous as they may be) that don’t necessarily warrant our attention, most politicians for example. This country was built on the backs of the working man and yes, fast food workers are working class people also…but damn! Part of the brilliance of “Compliance” is the manner in which Dowd & company convince us that every wrong headed decision they make & every ludicrous demand they heed makes total & complete sense to them. Of course there are the occasional questions they ask of the voice on the phone but the caller (Pat Healy) manages to assuage all of their concerns by merely adding on another layer of ridiculousness to his commands. There are a few points in the film in which he nearly trips himself up but he’s as fast with his words as they are slow with their common sense and he slithers by to continue Becky’s utter degradation at the hands of her co-workers.

Writer/Director Craig Sobel’s script is leaden with enormous plot holes, but that’s the point and the reason behind it’s efficacy. You will sit in bemused silence then slowly and inexorably become more and more upset and angered at the goings on as the film progresses. But as all of this is based on factual events and not the lunatic scribbling of a lunatic with an idea and a laptop, you can only sit in awe at the stupidity of your fellow man. In all seriousness, who does stuff like this? Who can be this goddamned stupid? If given a million years I would never imagine a situation like this transpiring among supposedly intelligent & rational individuals. I suppose there’s the concept of leadership & the people who are chosen to lead to consider as well. Someone thought Sandra was smart enough to assume the responsibilities of a restaurant manager, she obviously proved herself competent enough to someone to get the job. As a matter of fact the film shows us that she takes her job seriously & does it well. As someone who has worked in a management position in a restaurant/hotel for nearly 10 years I know firsthand that it’s not an easy job to do. The film doesn’t set her up to be viewed as an incompetent person yet it’s hard not to think of her as one as it continues. 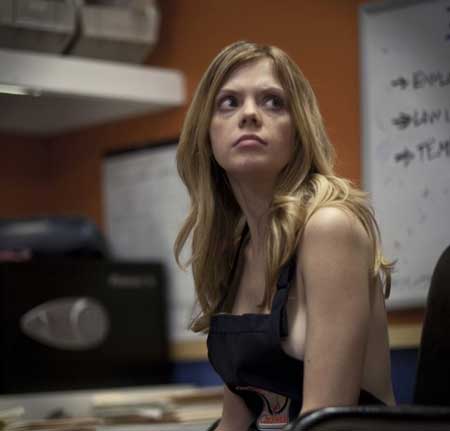 Yet she allows herself to be manipulated by a voice on the phone. Someone calling themselves an officer of the law on the phone telling her (At one point) to strip search Becky in the back room of the restaurant. There is no way she could think this was proper procedure yet she follows instructions to a t and her employees in turn follow her instructions as well. Perhaps director Sobel was trying to make a point about people in authoritative positions and the fact that just because someone says you’re smart enough to be in a position of management doesn’t mean you actually are (George W. Bush anyone)?

We also have to think about Becky and her mindset as she allows herself to be humiliated. Initially when confronted with the accusation she strenuously denies any wrongdoing. But she also falls prey to the voice on the phone, believing what it says and becoming fearful of the consequences if she doesn’t listen…becoming anything less than compliant. She is young and the audience has to take her age into account as her situation becomes ever more repugnant but she isn’t a 5 yr. old child. I thought of police interrogations I have read about in which the accused eventually agreed to all charges brought against them despite knowing their innocent simply because they were just worn down from all the incessant questioning and wanted it to end despite the consequences. Becky’s declarations of innocence grow steadily weaker as the film continues and she ends up doing some incredibly stupid things out of fear for her brother’s safety (the voice intimates he might be involved with illegal drugs).

I’ve heard that people have walked out of this film during some festival screenings out of anger. Some angry because they thought that the filmmakers were just mocking their intelligence because once again, nobody can be that stupid. Some angry because people are that stupid and who wants to see a film about a group of stupid people that isn’t a comedy? I think in actuality it might have hit a little to close to home for some. I know that as I watched it I was gobsmacked at the sheer idiocy of all involved but then I began to think about stupid things that I’ve done in my past (I got married…) & stupid things that friends/family have done in the past. Granted none of the things I thought about were this stupid but I did realize that ultimately none of us are as smart as we think we are and there is always someone waiting to take advantage of this.

The biggest reason why the film works so well is the cast. Let’s face it, the situation presented is so unbelievable that the casting had to be spot on perfect to keep people in their seats. While Becky is the focus of the film the crux of the film lies with Sandra, the choices she makes are what propel the film forward and if we don’t believe that she thinks she’s doing the right thing then the film would be an abject failure. Ann Dowd’s performance is worthy of recognition and I truly hope that she isn’t forgotten come award season. There’s a scene towards the end of the film in which Sandra is being interviewed and she answers a question with what sounds like a lie, and when she’s called on it she sticks to her answer. 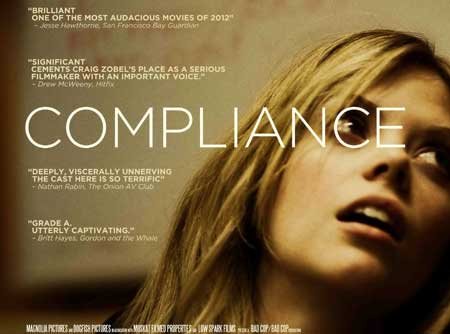 The interviewer then plays back some videotape (The whole incident was being recorded on the restaurant’s security cameras) which proves that she seems to be lying and as she watches the footage the camera just stays on her face as it goes from defiance to anger to sadness and eventually embarrassment all in 10 seconds. No music, voices or any other distractions…just her face, and it’s about as heartbreaking as anything I’ve ever seen in a film before. In a lesser actor’s hands this scene wouldn’t even be plausible let alone believable but Dowd pulls it off beautifully. Dreama Walker also gives a good performance but she carried something of a detached air about her in the opening minutes of the film that put me off to her character initially and she didn’t stray too far from it as the film progressed. As Officer Daniels (We never find out his real name) most of Healy’s performance is just a voice on a phone but you’ll find yourself wiping the sleaze off of your clothes as that voice & the things it says get progressively uglier. The rest of the cast perform admirably as well. 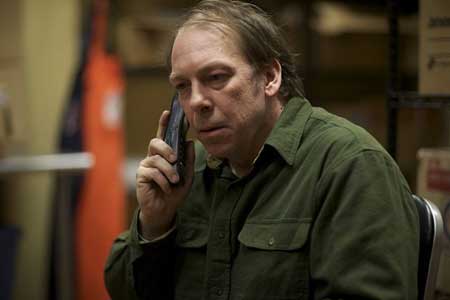 I don’t think anyone can watch this without questioning the level of stupidity of all involved, but I believe audiences will be questioning themselves afterward. It’s easy to say that I could never be as stupid as these people were but do I know this for sure? Does anyone? This is the power of “Compliance” and this is why it’s one of the best movies of the year. Not only is it one of the best movies of the year but it’s one of the most important ones as well. It will create quite the debate wherever it plays and for a film that (Currently) lies so below the radar that’s impressive. Craig Zobel has crafted a film that will divide audiences like no other and the fact that it’s a well crafted one makes it that much more important. See it and decide for yourselves. 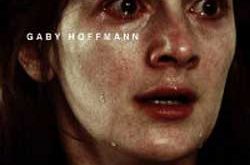