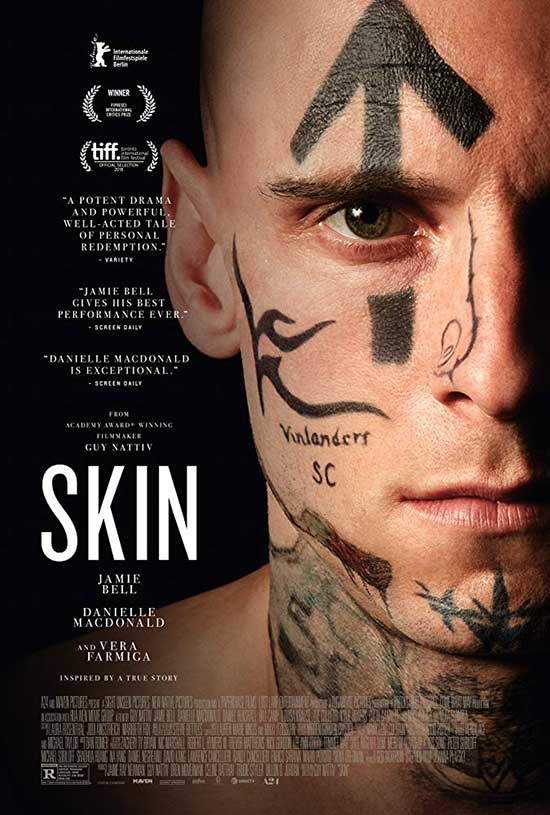 A destitute young man, raised by racist skinheads and notorious among white supremacists, turns his back on hatred and violence to transform his life, with the help of a black activist and the woman he loves.

Marching through the city, a large group of white supremacists are shouting “Blood and Soil” as their rallying cry. A group of counter-protestors meet them shouting “No KKK—. A supremacist spits on one of the counter-protestors causing violence to erupt. During the chaos, two of the supremacists chase down a young African-American, cutting him and scarring him for life. Beginning to feel regret for his past actions, one of the skinheads starts to worry about where his life is leading him. Trying to phase out his racist past to protect his family, he realizes that his skinhead “family” will not make that easy. 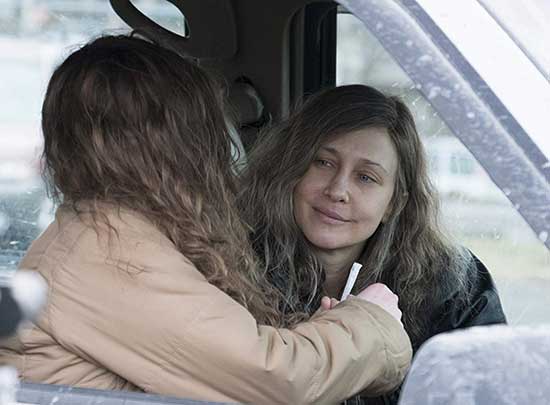 Skin is the “Based on a True Story” movie about Bryon Widner (Jamie Bell), a tattooed skinhead who starts to regret his place in his “company”, and is trying to leave. Bryon is split between his loyalties to his white supremacist group he’s been with for half of his life, and his new family. Though his actions at the beginning show how violent he is, it doesn’t take long to notice that he’s already a little soured on the whole deal. After being accosted by his victim’s mom, he just walks away in silence. When being questioned by his chapter leader Fred Krieger (Bill Camp) about why he didn’t fight back, he responds with “I’m just tired, I guess”.

Showing no regrets for attacking a young teen shows how indifferent Bryon is to harming anyone who isn’t white. Even the relationship with his first girlfriend is raw and visceral with no love behind it. Though he isn’t into  It isn’t until he goes to a rally and meets Julie that he starts questioning the actions of his group.  Julie (Danielle Macdonald) and her three daughters is the first relationship that he has that has even a bit of joy behind it. It starts with a genuine friendship which leads to a relationship and marriage. He’s never had such responsibilities before, and knowing that anything can go wrong makes him want to protect his wife and daughters. Helping his change is contact from Daryle Jenkins (Mike Colter), an African American man who desires to help members of hate groups repent from their lifestyles. Between his new family and contact with Daryle, Bryon finally decides to get out. The move from remorseless racist to regretful family man is realistic. Rather than just turn from violent to peaceful in a moment, Bryon struggles with losing his old habits from his old life. At one point he becomes suspicious of one of his adopted daughters, yelling and threatening her. When someone tries to interject, Bryon attacks them. This puts a strain on his marriage and forces him to realize that he needs to get rid of the bad influence of the past.

The entire movie has a tone of unease. Bryon’s life has been filled with unrestrained violence, and the movie feels that all of it will come crashing down on him at a moment’s notice. Even the time that he spends with Julie is fraught with this terrifying idea that it will go wrong. Towards the end, that feeling proves to be the truth when his old gang realizes that he has no interest in continuing with his membership. The tactics that are used against him and his family are some of the most uncomfortable moments of the movie. They are violent and willing to do everything they can to intimidate him, including shooting at his house where his daughters are and  hanging his beloved rottweiler “Boss”. While comeuppance sounds like it would be a great thing to watch, in a scene where it happens, it still feels bittersweet and sad. For many of those in the group, it seems that they either were so ingrained in the lifestyle that they couldn’t leave, or were introduced so young that they didn’t know any better. Bryon’s interactions with newest member Gavin (Russell Posner) brings that point home. The final moments of the movie, especially the real life moments ending does feel genuinely happy, though.

Watching the struggles of a hateful person trying to turn loving is a bit hard to watch, but well worth it. The acting is excellent, and while a few parts of the real life story has been changed, it keeps enough to be true to the actual occurrences. While Daryle Jenkins has only a few moments in the film, I recommend looking him up for anyone who wants to know how inspirational and positive he actually is. Skin is an excellent movie for anybody with a couple of hours to spare.