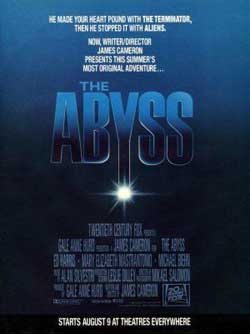 A civilian diving team are enlisted by a Conglomerate Oil Company and the U.S. Navy to search for a lost nuclear submarine and face danger while encountering an alien aquatic species.

Upon revisiting The Abyss from Director James Cameron (True Lies) I realized that it has to be really seen on the big screen to appreciate it. Something my good friend The Black Saint recently reminded me of as well. It is larger than life and a completely involving and spectacular “Event” film. Even back in 1989, James Cameron was still on the cutting edge of film-making. Pushing his actors, his technology and the proverbial envelope in order to bring us some spellbinding and fun motion pictures. Even with today’s CGI advancements he has never attempted to try and fix up “The Terminator” in any way and I applaud him for it. Take that George Lucas! The Abyss is either an indirect homage to Close Encounters or it  isn’t, I really don’t care since many felt it was just some kind of underwater “ET” Not the case. I enjoyed, through and through, Cameron’s Underwater Sci-Fi opus (filmed at the unfinished Cherokee nuclear plant site in South Carolina) on many levels and it holds up so well, today. The movie still looks great. It still sounds great and even if the story is a bit over-dramatic in parts, it still resonates. 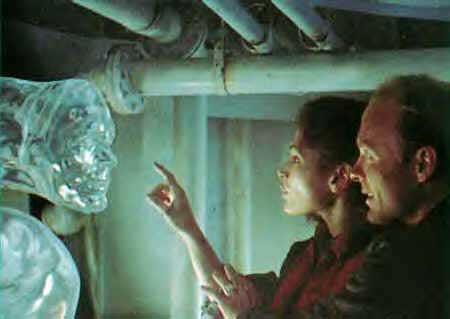 Alan Silvestri’s awesome opening music bombards us during the title credit of  “The Abyss” and we are on our way. The USS Montana, a ballistic missle submarine  patrolling the waters near The Cayman Trough runs into deadly trouble when chasing after an unidentified object that is reaching unheard of speeds that surpass anything the Captain and his crew have ever seen.. 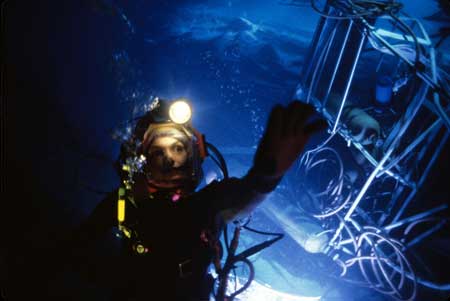 The Object gets the better of them and the USS Montana ends up colliding with a gigantic sea wall head on. Despite their efforts to contain the massive damage and flooding (the Captain launches a rescue marker/beacon) the Montana sinks with all hands to the sea bottom. I loved the shot of the maker beeping in the middle of the Ocean where James Cameron sets up this tale of isolation and man vs nature using the large canvass of a sweeping sea. It was and still is a vivid image. Enter then Mary Elizabeth Mastrantonio, who I’m loving on NBC’s Grimm, as Lindsey Brigman. A tough as nails and scrappy Oil Rig engineer and designer who is having her mobile underwater oil platform taken over by the US Navy. She’s none too happy with it and her intro is slick. We simply watch her high heeled feet drop down to a windy and rain soaked boat deck. Right out of the gate Lindsey is hardcore and proves she is not a pushover. She believes her husband Bud, played by Ed Harris (National Treasure 2, Pollack, Creepshow) is though. He willingly lets the “Goon Squad”  (Classic Cameron swipe at the military)  take over and he just wants to get paid the big bucks to follow orders and move the rig to where they can begin searching for the USS Montana. 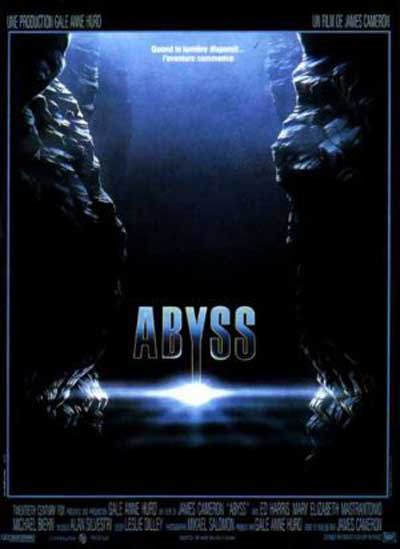 After he argues via tele-video communication and cuts Lindsey off Bud states to his friend Hippy (Todd Graff) – “God, I hate that bitch” and it’s followed by the bombshell reply from Hippy – “Guess, you shouldn’t have married her then, huh?” This biting and realistic to and fro is consistently displayed here and it’s refreshing and real. I remember having a grin on my face in anticipation of what someone would say next. The Oil Rig itself is very well realized by Production Designer  Leslie Dilley (Deep Impact, Star Wars). There are pipes, valves, catwalks, viewports and a moon pool that looks worn down, battered and in disrepair much to Bud’s dislike – “This place is starting to look like my apartment!”

The Navy dispatches some Navy Seals or “The Tough Hombres’  to dive down with Lindsey in tow. Micheal Biehn (The Terminator, Aliens) plays the hard edged and serious Lt. Coffey who right off seems to hate Lindsey (just about everyone does including many of Bud’s employees) and carries out his orders with his goons in tow. They reach the underwater rig and through some discourse and debate about pressure sickness the crew move on to the co-ordinates near the Montana where they launch a team to investigate why and how the Submarine sunk. When they arrive Coffey sends his men and part of Bud’s crew to search for survivors. Coffey on the other hand has different motives  and since the film at times can play out like some old Cold War thriller we get paranoia piled on. It appears that Coffey needs to get some codes and such that control the warheads of the sub. Even going as far bringing one back to the rig. It seems that they think Russkies are involved in the sinking of the Sub. Coffey and his Superiors couldn’t be more wrong.

Seems like the Cayman Trough is crowded these days with some alien beings that do not want to be tampered with and with humans travelling ever deeper into these chasms it appears that traffic jams are inevitable. At one point, Lindsey while hovering around the Montana wreck, sees some underwater aliens prying around as well. Inside the wreck, one of Bud’s crew sees what he thinks is an “angel” that he thought was coming for him. The sub sequence is gripping and claustrophobic. The interior camerawork defines the way the rest of the movie is unraveled. Tight and scary places filled with mystery and wonder.  Back at the rig Lindsey can’t seem to get anyone to believe what she saw and Bud’s crew member is in a slight coma and can’t discuss what he saw in the sub. Hippy of course needs to “stay off Lindsey’s side” because he freaks out at the possibility of there being “NTI'” or “Non- Terrestrial Intelligences”  in the Trough. Bud thinks that she’s just flat out crazy and maybe suffering from pressure sickness. But it’s really Coffey who is not doing so well. See, he has the shakes and that’s not a good sign.  Instead of aliens Coffey sees hatred and fear and russkies. His sickness completely takes over and he becomes a full out psychopath. After the paranoia settles in he even becomes homicidal. 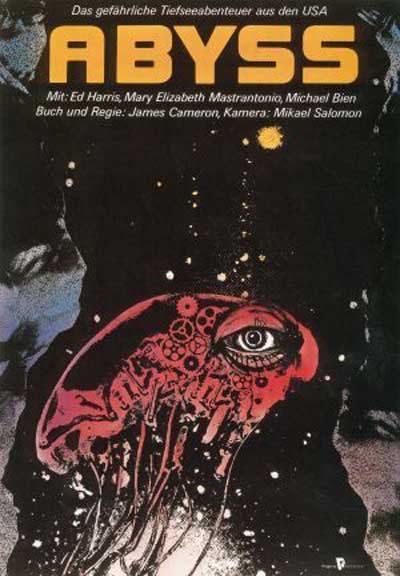 The Abyss easily hits the 2 hours + running time and I don’t want to spend anymore time on recapping since many reading already know the story and for those who have never seen it will be pleasantly surprised. Cameron excels at tension and The Abyss is full of it. Cameron builds it very slowly and intentionally. He throws in some doses of wit, wonder and astonishment. For example the early CGI rendering of the “Alien Water Tentacle” is just jaw dropping to watch as it makes it’s way from the ocean through the Moon Pool and throughout the confining corridors of the underwater rig. It makes it way right to Lindsey and Bud. There is a quiet and wonderous moment between it and Lindsey. She touches it and finds out that it’s salt water.

The Aliens can manipulate the water and use it as a sort of “Water Cam” to check things out. Coffey sees it and goes ballistic. The Water Being sees the nukes that he’s been hiding and then the cat’s outta of the bag.  Coffey eventually arms the nuke and uses an ROV to send it to the NTI’s. Cameron gives us some well placed drama like Lindsey’s intentional drowning and resurrection. A great fight scene with Bud and Coffey and my favorite the submersible battle between Coffey, Bud and Lindsey. It’s a breathtaking sequence that does not disappoint. It’s so exciting that even at the conclusion where Coffey faces his demise we actually feel sorry for him. Coffey, despite his sickness, was just carrying out his orders. But damn he did give us our money’s worth. Biehn is taut, physical and has a twisted gleam in his eye that lasts the whole movie. 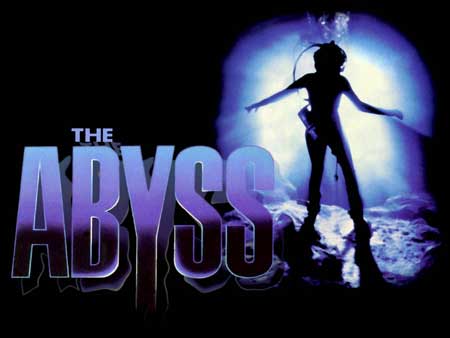 The Abyss has plenty of subtext and on different levels, some that aren’t so obvious, Cameron conveys some Cold War sensibilities. I’m reminded of “The Day The Earth Stood Still” In the expanded edition Bud listens closely as the aliens shelter him and show him through news footage that if we keep up with our self destructive ways we will be eliminated Klatuu style. Cameron conjures up a huge sea wall that towers over the US coast but never spills over. Cool stuff like that. Eventually, after Bud dives into The Abyss (using US Navy technology in order to survive the pressure) he disarms the nuke and the aliens decide to reveal themselves in order to re-unite Bud and his estranged Wife.

They reconcile after Lindsey almost dies. The ending feels a bit rushed and everything ties up too neatly but what a damn ride The Abyss is. It hold up really well and provides us with some spectacular drama, tension and incredible performances from the leads. I personally enjoyed Kimberly Scott as “One Night” who steals every scene she’s in and in the extended cut sings an old country/western tune and shows off her lungs. The late, great Leo Burmester (Broadcast News) is just awesome as the down to earth and lovable “Catfish.”  Despite, not being the most original type of “alien first contact” sci fi, Cameron delivers on all levels. Sets, Effects and Music are all spot on here. Given some hazardous filming situations (like near drowning) everyone pulls through in bringing us a classic Underwater Adventure with a great message that comes from great science fiction lineage. Enjoy!