Home | Vampires Lurk in the United States – Read All about it

Vampires Lurk in the United States – Read All about it 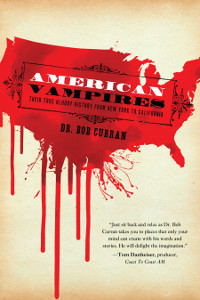 Did you know that vampires appear not only in the movies and in the darkest corners of our minds? A new book reveals that these creatures of the night are real, and lurking in the cities and the countryside of the United States––unknown to local residents, until now.

Destined to be another of Dr. Bob Curran’s bestsellers, American Vampires: Their True Bloody History From New York to California will be released in the fall in time for Halloween.

Complete with goosebumpy illustrations and a bloody book jacket, the book is a page-turner packed with extensively researched facts, folklore, eyewitness accounts and details on where the vampires are located; vampire tours of the U.S. are likely to result.

“Just sit back and relax as Dr. Bob Curran takes you to places that only your mind can create with his words and stories. He will delight the imagination.”

Vampires are much more complex creatures than Buffy The Vampire Slayer, Twilight, True Blood, or scores of other movies and television shows would have you believe. Even in America.

American vampire lore has its roots in the beliefs and fears of the diverse peoples and nationalities that make up our country, and reflects the rich tapestry of their varied perspectives. The vampires that lurk in the American darkness come in a variety of shapes and sizes and can produce some surprising results. Vampires in North Carolina are vastly different from those in South Carolina, and even more different from those in New York State. Moreover, not all of them are human in form, and they can’t necessarily be warded off by the sight of a crucifix or a bulb of garlic.

Dr. Bob Curran visits the Louisiana bayous, the back streets of New York City, the hills of Tennessee, the Sierras of California, the deserts of Arizona, and many more locations in a bid to track down the vampire creatures that lurk there. Join him if you dare! This is not Hollywood’s version of the vampire—these entities are real!

Dr. Bob Curran was born in a remote area of County Down, Northern Ireland. Since leaving school, he has travelled throughout the world, fascinated by the myths and stories that he has found. He has written a number of books looking at culture and lore, including The World’s Creepiest Places; Vampires; Lost Lands, Forgotten Realms; Zombies; and Werewolves. Curran lives in Northern Ireland with his wife and family. Find him at drbobcurran.blogspot.com.