I have seen tons of horror movies in my lifetime, and as a result I have seen more death scenes than I could ever count. Some are awesome, some suck sour frog ass, and some are just freaking weird, usually because of the unlikely item used to kill someone. Several examples come to mind, but there are some that stand out more than the others. Without further ado I present to you my list of wacky and weird death scenes (in no particular order) that involve some sort of odd item being used as a weapon. Please keep in mind that there are a lot of spoilers ahead, so if you haven’t seen one of these movies and don’t want me to give anything away then you may want to take care while reading portions of this article.

Leprechaun (1993)
Man killed with a pogo stick-The Leprechaun movies are silly as hell and aren’t supposed to be taken seriously so I almost didn’t include this one on the list. However, looking back I do remember the first film being marketed as a legit horror film instead of some horror/comedy that the series soon became so I thought that it was just fair to mention it. The bit where the title character kills a guy by bouncing on his chest (while singing a happy little song to the tune of “This Old Man” no less) with a pogo stick is just plain bad and one of the cheesiest death scenes I have ever seen. Don’t get me wrong, I like goofy, weird stuff just like the next guy, but I don’t need that much cheese on my pizza. 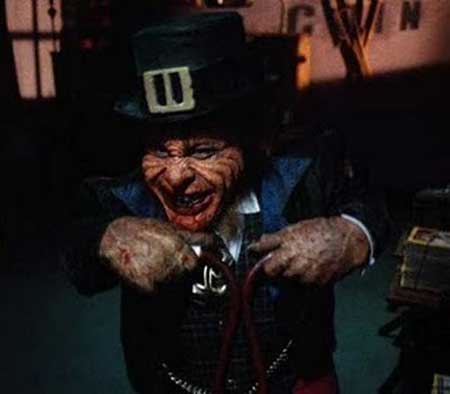 Hostel III (2011)
Death via Madagascar hissing cockroaches-There are some awesome death scenes in the Hostel films, and most of them are brutal and creative to a certain extent. On the other hand, the third installment boasts a very crappy one that is just weird and doesn’t work (most of the others from the film are good, but this one just seems very forced to me.) We have a poor helpless woman who is bound at the arms and legs and then sprayed with something from a spray bottle (I assume it is supposed to be some sort of cockroach pheromones or something) that drives the roaches crazy. A copious amount of roaches is dumped on her and they swarm all over her, covering her up in seconds. She basically dies from asphyxiation as they start pouring into her mouth and down her throat. Why didn’t she stop screaming and just keep her mouth shut? Why didn’t she start biting the hell out of the little f*ckers as soon as they entered her mouth? I don’t know either. This scene is incredibly lame and I think the screenwriter just phoned it in at the last minute. Who knew that roaches could be used to murder someone? 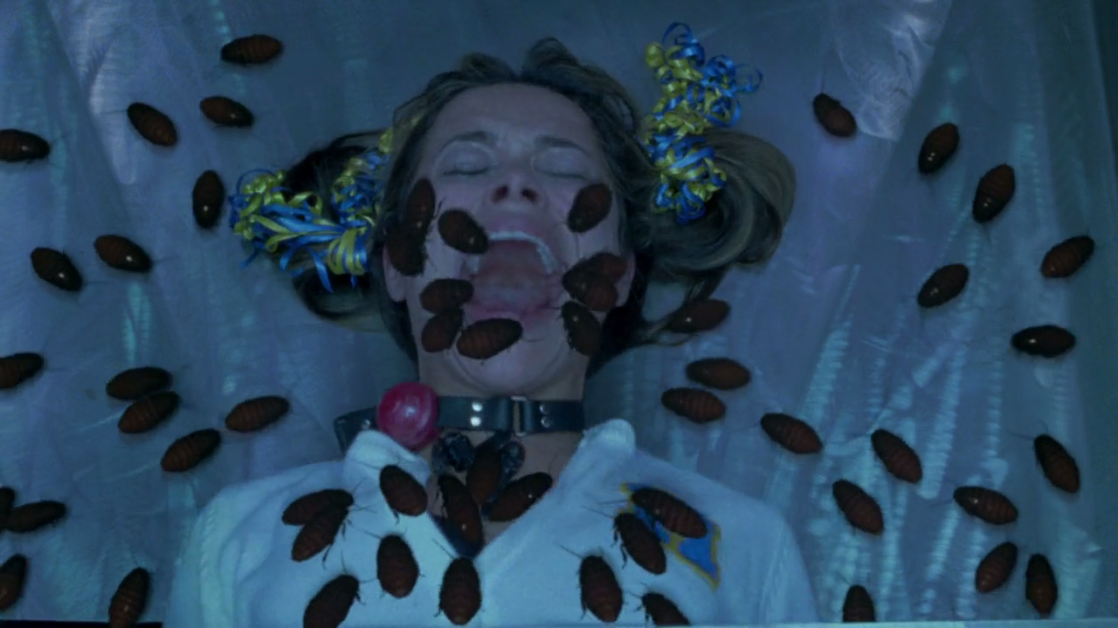 The Boogeyman II (1983)
The old “toothbrush through the head trick”-If you have seen the original Boogeyman film from 1980 then you have pretty much already seen The Boogeyman II as over half of the movie is made up of flashback scenes from the first film (much like Silent Night, Deadly Night 2 did as most of its running time is just scenes from the first movie as well). Toward the end we finally get some new footage and get to witness someone being killed… with an electric toothbrush. Honestly, I couldn’t make this up. It is shoved into some guy’s mouth with such force that it actually comes out of the back of his head. That is one powerful toothbrush you’ve got there, pal! Not only does it remove plaque and tartar buildup on your teeth, but it also blows a hole in your head as well (and all this time I have been using a Reach toothbrush. What was I thinking?). I wonder how many dentists recommend this brand of toothbrush to their patients… 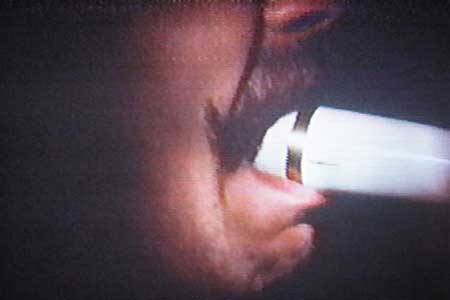 See No Evil (2006)
Eat a cell phone death-Have you ever been around some annoying person who wouldn’t stop talking on his or her cell phone? I’m sure you have. Did you want to cram the phone down that person’s throat as a result? That’s exactly what the hulking, homicidal behemoth Jacob Goodnight (played by one of my favorite wrestlers of all time, the awesome Glenn Jacobs aka Kane) does to some chick in this movie. He crams it in her mouth and forces it down her throat, making her choke to death on it. When I first saw the scene I couldn’t help but wonder what would have happened if she had been using one of those big ass brick phones like Zach had on Saved by the Bell back in the day (Wow, my first Saved by the Bell reference for the site). 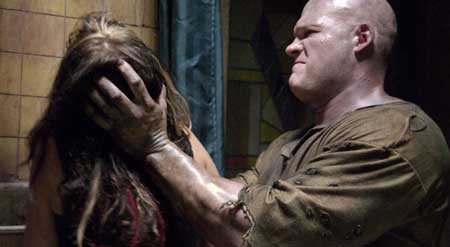 Silent Night, Deadly Night (1984)
Linnea Quigley hangs out with a deer head-I absolutely love this movie and think that it is nothing short than completely and totally awesome. Not only did it make little kids even more terrified of Santa Claus than they already were, but it also caused a small number of people to fear the mounted deer head in their home. Most people wouldn’t consider it to be a lethal weapon, but I am sure genre mainstay Linnea Quigley would disagree since her character is impaled on a mounted deer’s antlers and left to die. This scene is classic and caused me to view the deer head in my uncle’s living room in a different, more sinister light. 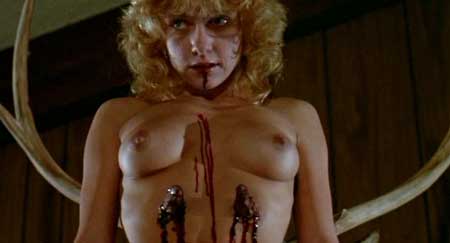 Last Dance (1992)
Just drink a glass of fishhooks-Most people haven’t seen (or even heard of ) this movie and when I have asked around the majority of people think I am asking about that sh*tty Sharon Stone movie that has the same name. I was lucky enough to catch it one night back in the 90’s on USA Up All Night and thought that it pretty much rocked. It is about a bunch of dancers/strippers competing in some dancing contest and some mysterious assailant is knocking them off one-by one. The scene that earned it a spot on this list is the one where the killer drops a handful of fishhooks into the bitchy girl’s drink. She doesn’t see this happen (because if memory serves me correctly she is busy bitching at the bartender) and takes a big swig of her drink, only to suffer the deadliest (and most painful) sore throat in the history of mankind before spitting up some blood and falling over dead. This scene really freaked out a friend of mine and is the reason I always check my drinks when I am at a bar. 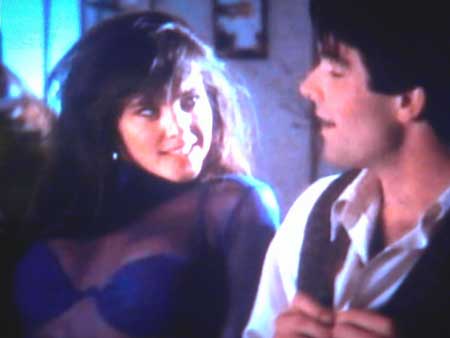 Sleepwalkers (1992)
Have some corn, why don’t ya?-Who isn’t aware of this scene? If you’ve ever wondered what it would be like (or for some reason wanted to see it for yourself) if someone was stabbed with a corn cob then I suggest you check out this movie. If you haven’t seen this movie and are confused as to what I am talking about allow me to explain. There is a scene where someone is stabbed in the back with a corn cob and dies. A freaking corn cob. Why are you laughing? I’m not kidding, it really happens. My only regret is that no one yelled “Look out! She’s got a corn cob!” before the foul deed takes place. Vegetables are good for you? I’m afraid I have to disagree. 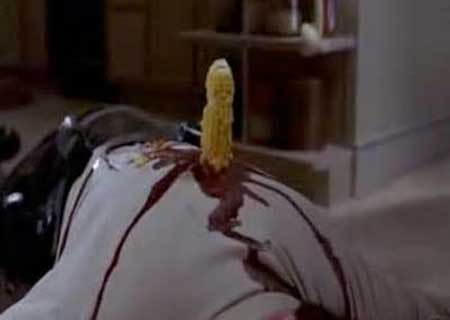 Mausoleum (1983)
She’s got the tits that kill…that KILL (sing it to the tune of Motley Crue’s “Looks that Kill and it makes more sense)-I think that it is a pretty safe bet that most guys (and some girls) love boobs. I have never heard anyone say “Damn! I really wish that she would just put her shirt back on!’ or see anyone try to start a foundation to abolish boobs. No one I know of are offended of-or scared of-a pair of women’s breasts. That could possibly change once you see the classic 1983 horror flick Mausoleum. You see, there is a very bizarre scene where this dude is making out with his wife in the bathtub. She is nude, horny, and unbeknownst to the guy, possessed by some demon. While they are making out her boobs grow teeth and they proceed to EAT THE GUY’S CHEST!!! You have to see this scene to believe it. One minute she has a nice rack and the next it is replaced with two demonic faces with sharp teeth. Without a doubt this is the weirdest, most out there death scene I have ever seen, and I was freaked out, confused, amused, grossed out, surprised and a little turned on all at the same time when I witnessed it. The best thing about it is that it is not supposed to be a funny or goofy scene and the tone is dead serious. I don’t know about you guys, but I have a hard time taking a pair of demon possessed killer boobs with teeth seriously. Then again I suppose there are worse ways to go… 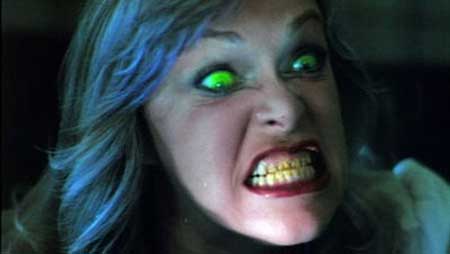