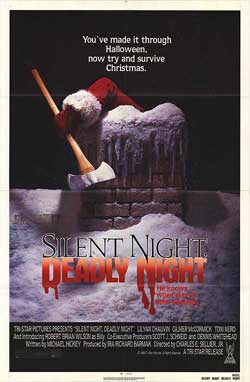 Years after witnessing his parents perish at the hands of a burglar disguised as Santa Claus, Billy Chapman dons a Kris Kringle suit of his own and goes on a terrible holiday killing spree, finally returning to the abusive orphanage that raised him. ‘Tis the season for yuletide mayhem! Charles E. Sellier Jr. directs this horror cult favorite, co-starring Robert Brian Wilson and Lilyan Chauvin.

Hell-o, boys and girls. Merry early Christmas to all. Have you been good all year… or have you been naughty? If you have been naughty, this one is for you. That’s right, it’s the Christmas classic that outraged parents across the United States at the time of its release, Silent Night, Deadly Night. 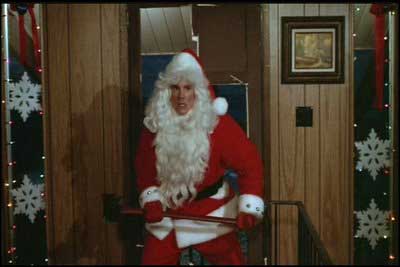 This controversial Christmas classic has been a favorite of mine since I was nine years old and I still watch it today with as much appreciation as I had for it as a kid. There is a cult following that still stands strong today for this film of ringing slay bells. There aren’t many to choose from, but right beside Black Christmas (the original, of course. Fuck the re-make), this is my all time favorite Christmas celebration film. I honor it with a viewing every Christmas Eve and have since I was nine. It’s a seasonal ritual. Although it was followed by one decent (part two) and three other horrible sequels (one even starring genre legend Bill Moseley of Texas Chainsaw Massacre II, House of 1,000 Corpses, The Devil’s Rejects and The First Power as Ricky Caldwell, Billy’s now aged younger brother), the original is the best of them all.

This holiday massacre of a film, based off of the novel Slay Ride, by Paul Caimi, caused loads of outrage upon its release as mentioned above. Siskel and Ebert read the credits on air and said “shame on you” after each one. Leonard Maltin asked the curious question, “what’s next, the Easter Bunny as a child molester?” Tri-Star, the original releasing company, pulled the ads for the film only six days after its release, on November fifteenth. The PTA tried to ban it due to the Christmas theme. Finally, and probably the most shocking of all(in my eyes, anyway), the Director, Charles E. Sellier went on to start his own campaign to rid cinemas of the films such as the one he created only a short time before. That, to me, is pure blasphemy. How could he do such a vicious thing. 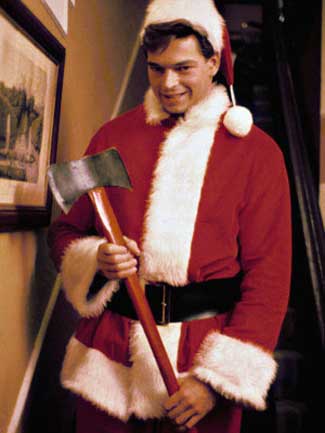 The film starts out as young Billy is warned by his institutionalized grandfather asks him if he knows about Santa Clause. Afterwards, he asks if Billy’s been good all year. When he hears the young boy’s answer, he warns him, “if you see Santa Clause, you better run, boy… You better run… for ya life.” On the ride home, he sees Santa. His father is shot, while his mother has her shirt ripped open and her throat cut by the not so jolly man in the red suit and white beard. Skip ahead three years… Billy and his younger brother, Ricky (a screaming baby, or “little bastard” at the time of his parents’ murder) are put in an orphanage. Billy is ridiculed by the other children and tormented constantly by the head Nun, Mother Superior (which does a superb job of being almost as evil and menacing as Santa, or Billy Caldwell, himself). She assures him that…”Punishment is absolute… Punishment is necessary… Punishment is good.”

Every time Christmas rolls around, Billy does not take it as lightly and carefree as the other children. He freaks out every year when he sees the man dressed as Santa Clause that visits the orphanage. One year, he punches him square in the nose. His drawings reflect his traumatic experience… Skip ahead ten years and Billy gets a job at a department store. When Christmas rolls around this year, the usual man that dons the outfit cannot make it and Billy is asked to fill in. He is hesitant at first, but accepts the job… and all hell breaks loose on this white Christmas eve night. As Billy leaves the department store with three kills already under his belt, the merry body count continues… The word “naughty” is uttered throughout the film by several characters. 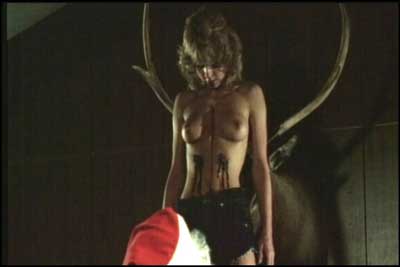 The death scenes are awesome for its time of release. The Gore Score is around a ten. The Special Effects, done by Rick Josephson, were ahead of most that came out around this time. There is a surprise decapitation, with a full view of the headless body as the head rolls down a hill behind it. Our luscious scream queen, Linnea Quigley, is mounted topless on a set of antlers in a pretty graphic manner. There is a strangulation and hands on hanging by a strand of Christmas lights, which is followed by an arrow killing. The least graphic death scene of all would have to be the decapitation of a snowman. There are other deaths that I will not mention. They will be your gift upon viewing (be sure to get the uncut version, of course).

The music score, composed by Perry Botkin is creepy and almost sounds as if it were made to take the spirit right out of the holiday, which is a plus in my eyes. Especially during the title card of the film. The score blasts at you with a splat of blood to prepare you for the slay ride that lies ahead. Most of the other music in the film are Christmas carols and seasonal themed songs. 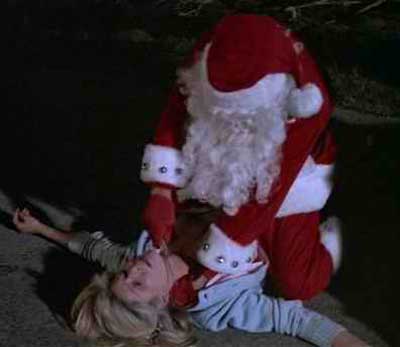 One thing I am so glad to hear is that was supposed to be yet another butchering re-make of this timeless classic, which recently got canned. Maybe they feared the same reaction that the original drew. I hope so, nonetheless, the re-make is dead. Merry early Christmas to me, and any fan of this bloody red bag of nationwide outrage. I have owned a VHS copy of this since I was fourteen and was so happy to hear of its DVD release, a double bill featuring part two as well.

The DVD comes with a split cover of the original (second version of the advertisement art) and sequel, split diagonally with a red ribbon. The DVD extras include an audio interview with the Director, Charles E. Sellier Jr., a poster and still gallery and “Santa’s Stocking of Outrage.” The other side of the DVD extras (along with part two) includes an audio commentary with the Writers and Director of the sequel and actor, James Newman, a theatrical trailer, poster/ still gallery and DVD/ROM original screenplay. This makes the perfect Christmas gift for any fan of the film.

All in all, I must say… agree or disagree with me on this one, but I love this hemorrhaging holiday classic. It has always been one of my top five favorites and always will be. I was lucky enough to get my original ( first print of the film, with all of the warnings, screams and wide open eyes) poster signed by Linnea Quigley. It is framed and is something I cherish as much as the film, itself. If you want to see the best of the five part series, check out the original and (somewhat) part two, which is mostly a series of flashbacks from the original, as Ricky explains the legacy of his older brother to the police ( and part three: Better Watch out…. only if you’re a hardcore Bill Moseley fan, but I warn you none of them are as appealing as the original). I give this film, Silent Night, Deadly Night, FOUR HORNS (IN HELL’S BELLS) UP.