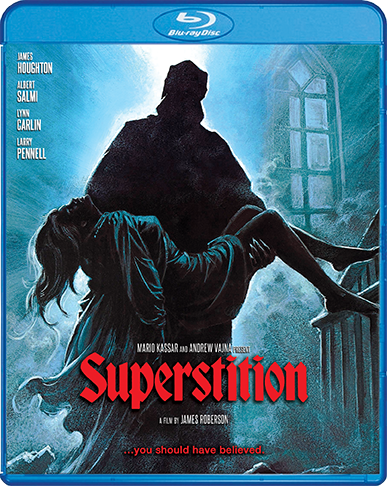 A family moves into a long-condemned New England household with a big pond out back that everybody loves to swim in. Soon, however, they find that the pond was the site of the execution- by-drowning of a witch three hundred years before, and she’s back to revenge herself on anybody nearby, whether they’re Catholic or not.

There’s not much I love more than watching a new-to-me horror film from the 1980s…except maybe writing a real-time review of said film and sharing my sense of discovery with a few aficionados of the genre. I don’t know much about “Superstition” other than it is alternately known as “The Witch” and it is currently up 126% in popularity this week on IMDB, so I’m coming into this one without much to go on. The film had been sitting innocently enough near the bottom of my Netflix queue for at least a year when, due to a delivery snafu, it wound up in my mailbox  yesterday. Though I try to keep Netflix stocked with (relatively) new releases, this week has seen the home screenings of both the original “Police Academy” and “Loose Screws”  so I guess it is only fitting for this impromptu series to culminate with this horror flick from 1982. 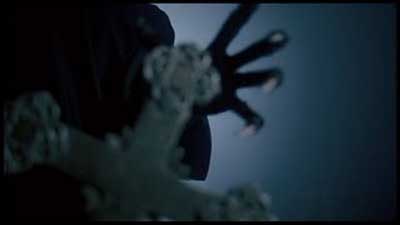 Things start off in grand style: two teens making out in a parked car in front of an abandoned house. Doesn’t get much better than that…except when it does two minutes later after two pranksters scare them off and inadvertently become the prime targets of the unseen menace lurking somewhere in the abandoned house. Not a bad set-up…but let’s see how it’s paid off, shall we?

One of the pranksters disappears and the other practical joker, who could best be described as a young George Costanza, begins walking through the house yelling “Hey, Artie?!” for five minutes. Seriously? I mean, how are you going to find your friend- 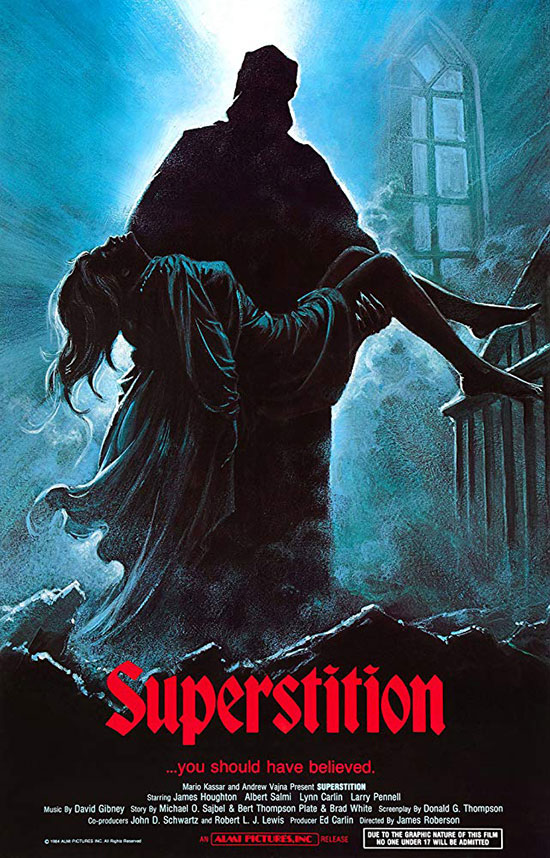 He just found him: Artie’s head is cooking in the microwave! And it just exploded! Nice.

After scrambling over Artie’s headless corpse, young Costanza attempts to escape…and is literally cut in two by the unseen evil. Fade out as the top half of his body tries to crawl away from the cursed building… 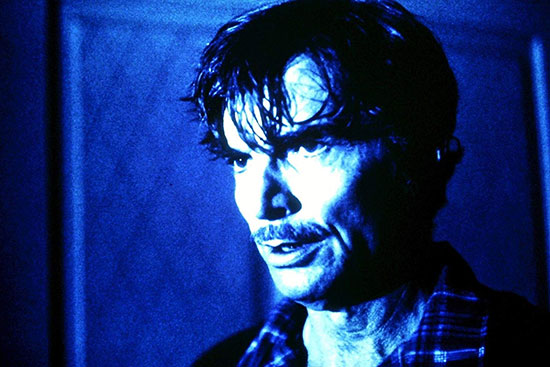 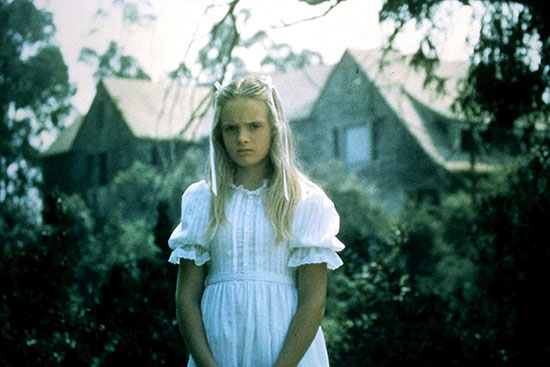 Turns out the house belongs to a local church. Short history of the property. Some background on Arlan, The Caretaker. “The medical examiner thinks it’s some sort of cult thing.” Some more backstory. It looks like they’re sending the young Reverend David Thompson to, um, renovate the place and get it ready for Pastor Leahy and his family to move in. Okay…

Two fake scares in a row.

We’re finally introduced to Arlan, who runs out to the pond behind the house and starts splashing around with his hand in the water. What why? Maybe this is all connected to the pond somehow? Well, I guess the police detective spying on him is going to be in the best position to figure it all out…unless he’s foolish enough to walk out on the pier all by himself and then drop a bunch of coins right next to the water.  Oh, he is. At least I hope he doesn’t get pulled into the pond by a ghoulish figure. Oh, he did.

Dead policeman…which leads young Rev. Thompson to declare that he is going to drain the pond…which sends Arlan into a rage. Anyone see a connection yet? Nope? Okay.

Great. Looks like Arlan’s mom is a cuckoo, too. Lots of cryptic talk with feminine pronouns and vague threats of imminent violence associated with the pond out back.

Freaky. A little girl in a white dress just showed up.Is she a ghost? “My name is Mary.” “Do you live here?” “Not anymore. I’m just visiting.” Definitely a ghost, IMO.

Lots of renovation being done with lots of sharp tools. Yep, there’s the circular saw…which flies off the table and grinds its way through one of the priests. Totally nasty (and in complete defiance of the law of physics). [This flick certainly doesn’t skimp on the gore].

Lots of girls just showed up to help with the work on the house. [Turns out they are Pastor Leahy’s daughters].

Handyman just “accidentally” hung himself in the elevator(!) shaft. 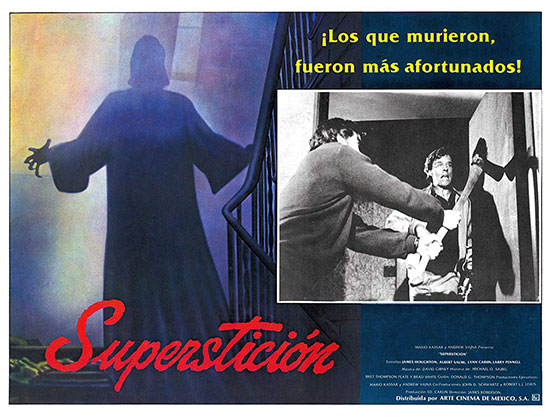 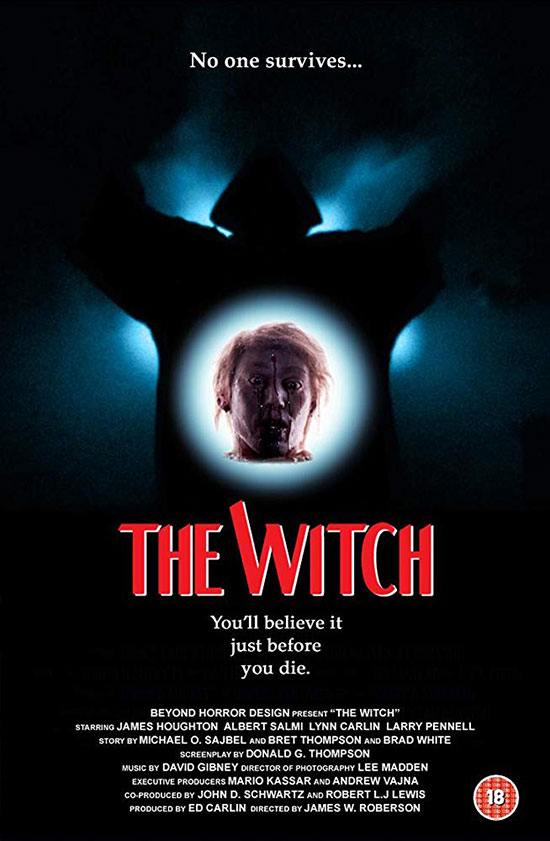 Now who’s this other kid? I don’t know yet, but he’s investigating something in the basement. There’s the little girl in the white dress again. I wonder why nobody seems to care where she came from…is she the daughter of one of the construction workers? Doubtful, but it’s another theory…

Pastor’s daughters just decided to take a dip in the pond. Creature attack! “Something’s got my foot!” Everyone into the water to help…they save her, but wait…there’s a severed hand attached to her ankle! Turns out to be the detective’s. Not good.

[One of the things that always gets me at this point in these movies: why stay? I’d be out of there as soon as I met Arlan the Caretaker…why wait for the severed hand wrapped around your ankle? Or worse…].

Another false scare. I should start keeping track (I think that’s like, what, five or six so far?).

Here’s that little girl again! Somebody get a clue!

Lots of flashbacks (including a replay of the exploding head in the microwave, which was still pretty sweet).

More with Arlan’s mother…”He protects his mistress.” Rev. Thompson is going to get to the bottom of it, though. Turns out it all started in the summer of 1692. More clues from Arlan’s mom.

[38 minutes in and I’m still relatively into it]. 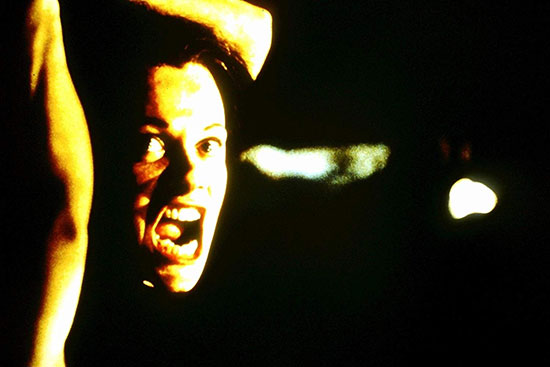 Cookies and milk for Justin, the preacher’s son…ominous music and a creaky door. What’s next? Great, he’s going back into the basement (this kid is fearless). Weird bell sound makes me think we’re in for a real scare, but I might be wrong.

Still waiting…[more of that weird bell].

Justin just found the dead guy in the elevator shaft! And then something pulled him up into the shaft (and maybe killed him, too…but is this really that kind of movie?).

More from Arlan’s mom (looks like her name is Elvira). Turns out the Reverend took a cross from the pond. Bad idea. Looks like he just unleashed the spirit of the witch…or something. He ignores Elvira’s warning and she lays some more cryptic sh*t on him.

Now they can’t find Justin. Everybody down to the basement! [Gotta love the whip pans that go a little too far and then self-correct].

The daughters are upstairs arguing with mom acting as referee: “Shut your bitchy mouth!”

Reverend Thompson researching the case: turns out they have an old copy of the Maleus Malifacorum in the church basement (in English, no less).

Flashback to 1692! Let’s get a confession from this witch, people! Okay, let’s drown her in this pond instead. [This was actually a pretty good flashback scene]. Shit…the witch’s spirit set our church on fire and then killed a bunch of people in unrelated accidents. This town is cursed now!

Back to the present day: looks like they discovered a sub-basement under the house…but still no pastor’s son.

“I tried to call for back-up, but the phone’s out.” Great.

More research in the church basement and another flashback to 1692. [Kind of bummed there hasn’t been a good violent death in a while].

Now they just discovered some sort of underground lair. And a dead body. must be Arlan’s place…that’s his jumpsuit in the closet, isn’t it?

POW! Arlan springs from behind the blanket hanging on the wall. Got him! Case closed…right?

Nope. The Inspector’s still not satisfied…going to poke around Arlan’s room a bit more. Oh, what’s this? Bam! [Two false scares (bringing our total to seven) followed by a legit one]. Looks like they got the Inspector now, too.

Oh no they didn’t. Dead pastor’s kid discovered by his own mother! Stone cold.

Pastor paralyzed by fear, but somehow he snaps out of it. Here comes the witch! Catfight with the pastor’s wife!

Reverend Thompson to the rescue (with a little help from Arlan’s mom, who reminds him to bring the old cross because, you know, he might need it).

Awesome shot of witch dragging pastor’s wife out of the kitchen by her face.

Everyone who’s still alive, out of the house now! Shit, the door’s locked. Thank god for this exploding cross from 1692. Problem solved.

Looks like the pastor’s really lost it now. He just got killed by an exploding mirror (too bad you could see the camera operator in the corner just before the thing was blown to pieces).

Daughter in peril. Oh, Jesus. The witch just drove a wooden stake through her forehead.

Now it’s the witch vs the Reverend. Mano-a-mano. And there’s a windstorm in the house, too! Oops. The Reverend just broke the magic cross.

Wait, what? The witch just disappeared and the windstorm stopped. The Reverend’s alone with the magic cross, his VW bus (with a dead pastor’s daughter inside) and two cans of gasoline. You do the math.

Looks like he is going to set the pond on fire. It worked. But oh, sh*t. There’s that little girl in the white dress again. OMG: she’s the witch! Magic cross to her chest! Shove her into the lake! lots of fire and boiling water…but is it over?

Witch’s hand breaks the surface and pulls the Reverend into the pond. Roll credits!

I have to admit: this was a pretty good haunted house flick. No masterpiece, by any means, but definitely good enough to make the annual Halloween rotation. Turns out this film has a bit of a cult following, too. It was recently screened on both IFC and TCM, which makes sense, considering what a great example it is of early 80’s horror. Definitely check it out if you have the chance.

Superstition (1982) is now available on bluray 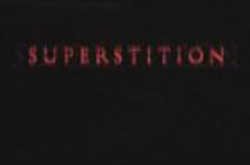