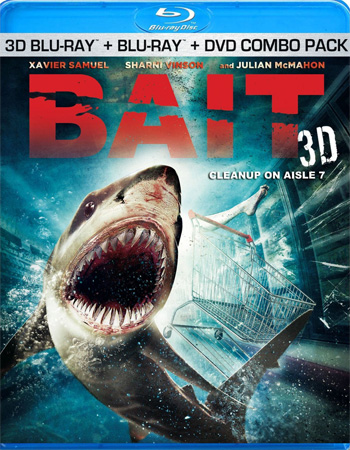 Josh and his fiancé Tina are planning on moving away to Singapore after their marriage. When a freak shark attack kills Tina’s brother, Josh is plagued with guilt over not saving his life and his relationship with Tina crumbles. A year later Josh is working at a grocery store when he runs into Tina again. As fate would have it, a giant tsunami hits and floods the store, leaving Josh, Tina, and slew of others trapped inside with an unlikely guest—a great white shark.

Bait begins like any respectable shark-attack horror movie…on a beautiful sunny beach, of course. Swimmers enjoying their leisurely dips and children building sandcastles, all are prerequisites to the doom that lurks beneath. The true terror of Bait however, is not just the great whites with big appetites, but the plotline that the characters are plagued to endure. Unfortunately for those anticipating a 3D Jaws-like experience, Kimble Rendall’s foray into the deadly shark world is not anywhere close, but there is some merit to the madness. 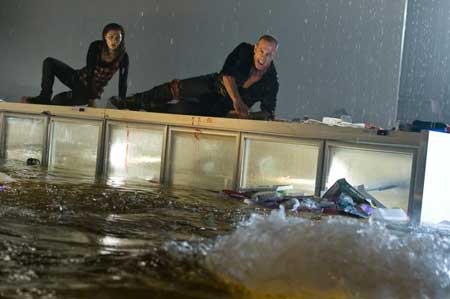 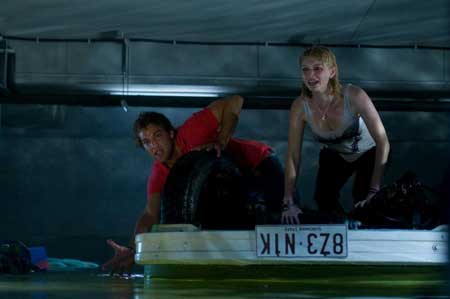 The film follows Josh, who lost his best friend in a freak shark attack incident. His fiancé Tina, who was the victim’s sister, can’t seem to move on so she leaves Josh and heads to Singapore. The past comes back to haunt Josh a year later while he’s working a crappy job at Oceania grocery and runs into Tina, who brought along a new man-friend she picked up while on vacation. Several plotlines are weaved together, including bad girl Jaimie who attempts to steal products from the store while her boyfriend Ryan works. As well, Jaimie’s cop father is called in to arrest her just as two fumbling robbers decide to stick up the store culminating in a showdown. And we mustn’t forget the jock and his dog-toting girlfriend making out in the car parking lot, because they’re just asking for bad things to happen! As each of these narrative lines nearly reach their climax, a giant tsunami blasts through the coastline destroying everything in sight and trapping everyone in the store. 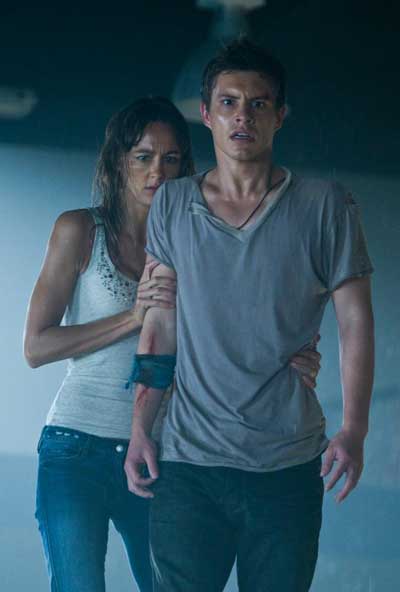 Luck is on the side of this colorful group as they all seem to have survived, with just one minor issue: there’s a great white shark in the grocery store with them. Cue dramatic music and people getting ripped in half; this is one really hungry shark. The movie again divides the narrative trajectory between the grocery’s main floor, and its almost completely flooded underground car park, but as you can imagine, the premise is quite simply “how do we escape?” After several foolish attempts, the group finally realizes they must work together as a team to survive.

Several obstacles thwart their efforts along the way, causing the crew to do some hilarious stints. One such scene occurs when Tina’s new man friend volunteers to shut off the store’s electricity in fear of broken cables blowing it up. The crew built armor for him to safely scuba dive in shark-laden waters, but with what products did they do this? Milk cartons and plastic bags? Spoiler alert: his elaborate armor doesn’t help him much. Another unintentional funny moment happens when the group discovers the robber who shot a girl in the store before the tsunami is among them as he threatens to stick a meat hook in a girl and use her as “live bait” to feed the shark. In the end, he’s the one who gets baited. And rightfully so! 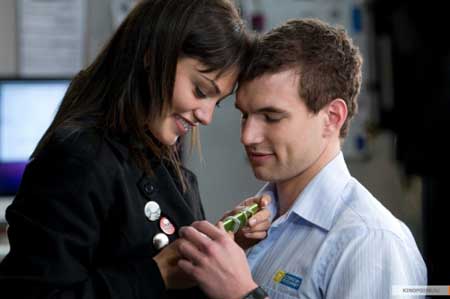 As fun as it is to watch a diverse group of stock characters die, some problematic aspects of the movie are hard to ignore. One of which is every actor’s lack of a performance. It’s so bad I thought after awhile that it was supposed to be reflexive in its approach. But, no, that’s not the case. I will liken it to a soap opera in terms of character dynamics. This is further highlighted in Rendall’s attempt to create a tender love story between the characters of Josh and Tina, but much like the current shark scenario, it’s rather unbelievable. Both Xavier Samuel and Sharni Vinson play their roles as the rekindled former lovebirds with incredible seriousness, the degree of which I cannot fathom for a film of this nature. As a protagonist, Josh seems to be the most levelheaded of the crew, but he has a face of stone. You may recall seeing him in the highly popular Australian torture p*rn, The Loved Ones, and indeed he makes for a good victim in that movie. However so, his one-dimensional performance comes across as nearly robotic. Other supporting characters are no better. In fact, most of them are textbook figures of various high school stereotypes, which may contribute in why watching them die is so fun. 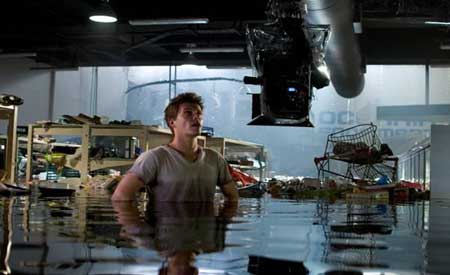 The sharks, as opposed to the humans, are definitely cool looking albeit highly artificial. They do not appear often, probably because of budgeting, but Rendall is good at keeping the audience aware of their presence even if not directly shown. Some of the shark attacks are really fun to watch, and this is where the little merit of the film comes into play. There are several juicy shark attack moments, enough of which fill up the basic premise of a shark movie. However, the movie could have benefited from some self-awareness. For example, if Bait knew it was capable of being a campy and fun 3D film, or even if it utilized motifs inherent in the genre for a good laugh, perhaps then it would be more enjoyable. Yet when you see the film you begin to realize that everyone in the movie is serious, and that the CGI graphics unintentionally foreground the film’s artifice. This creates is a movie that highlights its artificiality in way that removes the viewer from being able to engage in what they’re watching entirely. A fun shark-monster film is always appreciated when it is aware of it’s conventionality and plays on that, as we have already experienced with flicks like Piranha 3D. 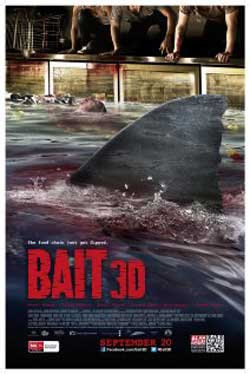 If all you want to do is to watch sharks in 3D eat people up, then you’ve got yourself a winner with Bait. The merit in the movie is within the viewer’s awareness, so be mindful of the camp factor involved. Without that warning, Bait is tough to digest.