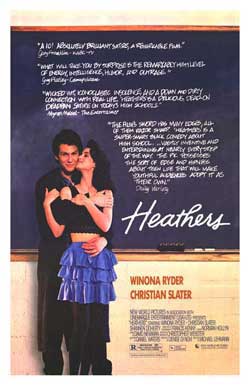 At Westburg High, you’re either a Heather or a nobody. And while Veronica Sawyer (Winona Ryder) may not be named Heather, she’s a Heather in spirit, waging battles in the full-scale popularity war. But just when it all gets to be too much, she meets mysterious newcomer Jason (Christian Slater), who offers her the perfect — albeit deadly — solution to end the Heathers’ social tyranny. Teen angst has rarely been this darkly funny or poignant.

Hell-o, everyone. It brings me great pleasure to review yet another one of my all time faves for you all. Although this is technically not a Horror film, it is a Black Comedy and very much a cult classic in the eyes of many. The tale of fitting into society, school clicks, life and of course, getting away with murder… while making it look like a suicide. Brilliant. Yes, I’m talking about the film with a huge following that some have never heard of, Heathers.

When I was in college, I met a ton of people from Ohio, where the film takes place. I would bring this masterpiece up to them and not a one had heard of it. That’s horrible. In a school full of film/ Special Effects students, that would be like me never hearing of The Texas Chainsaw Massacre. To start off early, I will recommend this film to you all, just as I did them. Watch this f*cking movie. It is one of the few (three, to be exact) comedies I can stand that almost cross into the Horror genre. It takes serious subject matter, such as ”teenage suicide,” and makes it almost laughable… in a way that everyone can enjoy, if you have that dark sense of humor, such as myself.

A little bit of history on the film. After its release, a high school student tried to reenact one of the murders, in which the film makers were blamed and almost went to court over. People… Parents, that is just wrong. I think Billy Loomis said it best when he said “don’t you blame the movies, Syd… Movies don’t create psychos, movies make psychos, more creative.” That’s just a little bit of black humor to go along with the theme. Seriously though, that’s as bad as blaming Judas Priest or Slayer for the act of suicide or homicide. Your children are weak minded and obviously are not being taught moral lessons as well as they could be. Moving on… The producers were originally looking at Stanley Kubrick (Director of The Shining, 2010: A Space Odyssey, Full Metal Jacket and A Clockwork Orange) to direct this film as it was originally going to be two plus hours of running time.

For one reason or another, Stanley declined and Micheal Lehmann took the helm to direct, and a fine job he did. As the film begins, it looks as though you are going into a full blown “chick flick.” The title card is in cursive and “Kay Sara Sara” is the background theme song, which shows up at the end as well, by another performer. I assure you, it may have some “chick flick” qualities to it, but it can be enjoyed by anyone. Mike Clark of U.S.A Today stated “Don’t be surprised if it becomes a classic…” and a classic it has surely become. Good call, Mike. Other reviews of praise state…” The best high school Black Comedy ever made(again, I couldn’t agree more),” “Wild and original,” and “Wickedly funny. If movies were food, Heathers would be a cynic’s chocolate binge.” Again, very accurate description.

The acting is awesome throughout the feature. With a cast like this, one would pretty much expect nothing less. Winona Ryder (Lost Souls, Dracula 1992, The House of Spirits… and a public West Memphis Three supporter) does a fantastic job as a half cynic, half caring high school student torn between trying to impress her friends… deal with her parents and play tug-of-war with her emotions dealing with her new Crush, Jason Dean… or J.D.(Christian Slater, of the new Stephen King film, Dolan’s Cadillac, Alone in the Dark, Very Bad Things, Tales From the Darkside: The Movie; and one episode from the original T.F.T.D series and Twisted).

This is one of my favorite characters that Christian has ever played. His dark humor shines brightly as a f*cked up kid with a f*cked up father, who owns a construction company, yet his thrill is demolishing the prior standing buildings with dynamite. Christian and his father have a unique way of communicating, in which the father/ son roll is reversed for the most part. All of the characters are memorable in this high school angst ridden comedy. Even the two bullies of the school, Kurt (Lance Fenton of Night of the Demons) and Ram( Patrick Labyorteaux of Summer School). Their contribution is foul mouth toilet humor throughout and their demise is quite laughable. I will not spoil it for those (hopefully very few) who have not seen this film.

Although the movie itself is filled with death, in either a homicidal, suicidal or suicide covered homicide, the gore score is quite low. Don’t let this fool you. The movie is still awesome, despite the lack of bloodshed. Most of the murders are by gun. There is an awesome “shot” of a blown off middle finger and the liquid drain-o death is quite effective. Some of the film is darkly funny, some is perverse and some is debatable for the weak minded. I;m sure some would ask “how can you find this funny?” That is not why I enjoy it so much.

I do like the black humor, but there is so much more to it than that. Another very unique factor of the film is the twisted dialog throughout. The Writer, Daniel Waters wrote himself out of working at a local video store and into the screenplay hall of fame with this one film. You will not hear dialog more colorful than this, even today. Some of the most memorable lines and phrases are…” Fuck me gently with a chainsaw, ”Diet Coke heads,” “Shower nozzle masturbation material,” “Save the speeches for Malcom X, I just wanna get laid,” “They sure do have an open door policy for assholes though, don’t they?,” “… a sword fight in your mouth,” “(my personal favorite quote…) Now that you’re dead… What are you going to do with your life?,”I love my dead, gay son,” and “We the students of Westerburg High will die… Fuck you all…” The list goes on and on.

There were rumors of a sequel going around for a while, but it was recently surfaced that the rumor was started by the star, Winona Ryder. She has begged for a sequel since the first one was made. The rumors are not true as of yet. There was a musical re-make for a stage act though. If anyone attempts to re-make this original, they must be out of their mind and I personally will start a boycott against the film and their career. That is how much I love this movie. Two of the characters (Winona’s being one of them) are named after Archie comic book characters, Bettie and Veronica (Winona).

The DVD has awesome extras. There is an audio commentary with Director, Micheal Lehmann, Producer, Denise Di Novi and Writer, Daniel Waters. There is a thirty minute documentary called “Swatch dogs and diet coke heads, featuring interviews with stars Winona Ryder, Christian Slater, Shannon Doherty(of the original first season of Scare Tactics), Lisanne Folk, Director, Micheal Lehmann, Writer, Daniel Waters, Producer, Denise Di Novi, Director of Photography, Francis Kenny and Editor, Norman Hollyn. There is also a theatrical trailer, a screenplay excerpt if the original(unfilmed) ending and talent bios. What is there not to enjoy? Again, if you have not seen this film, what in the bloody f*ck are you waiting for? Go rent or better yet, buy it. You will not be disappointed in the least. If you haven’t already guessed, I give this masterpiece of dark humor, Heathers, FOUR HORNS UP.