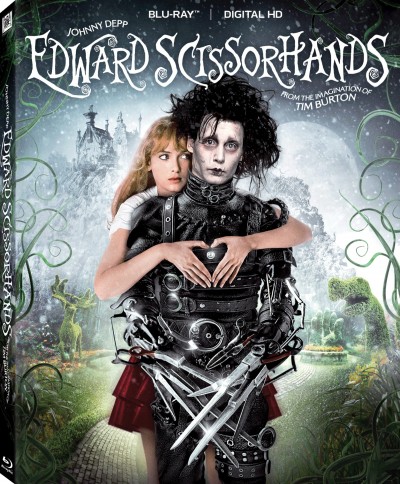 “A kind inventor is almost finished piecing together his latest creation when fate prevents him from completing his most important project. Edward may seem dangerous, with scissors instead of hands, but when a compassionate Avon lady comes calling, it’s clear that things are going to be changing for him after having been alone in the large empty mansion. What they both don’t realise is that the most important change of all won’t be found in him but in the residents of the sleepy suburb he will be calling home and a young teenage girl whose eyes will be opened.” (courtesy IMDB)

Tim Burton has become something of a one-man cult, and deservedly so, for he brought a new albeit Gothic-inclined look to eighties commercial cinema which was desperately in need of something to redeem it from creeping mediocrity. Beetlejuice (1988) and Batman (1989) were as good as they were because of Burton’s genuine comic-book vision of subjects that linger in the souls of most grown-up male children – call it the subliminal wish to be a hero if you like – and it is Burton’s particular strength that he understands the child inherent in the man and caters to it, while bringing a demonstrably adult understanding and skill to the construction of his creations. The creation of Edward Scissorhands (1990) came from a drawing by Burton as a teenager, reflecting his feelings of isolation and being unable to communicate to people around him. While making Beetlejuice, Burton started developing Edward Scissorhands for Warner Brothers and hired young novelist Caroline Thompson to write the script. At first Burton considered turning it into an operatic musical but, with a budget of only US$9 million, that particular idea was dropped (Burton would later return to the musical genre with a vengeance). 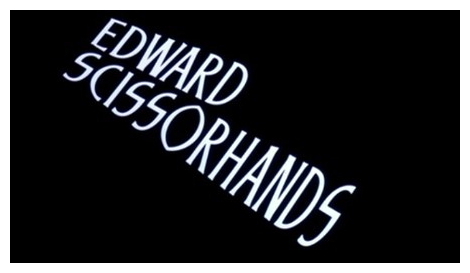 20th Century Fox then purchased the rights and agreed to finance the entire project giving Burton complete creative control. With the enormous success of Batman, Burton had finally achieved Hollywood ‘A-List’ status and was given the opportunity to make any film he wanted. Predictably, Warner Brothers wanted him to produce sequels for both Batman and Beetlejuice but, thankfully, Burton decided to do something more original and made Edward Scissorhands for Fox instead. Some Batman fans felt that film had missed its mark, wanting a more faithful adaptation of Frank Miller‘s Dark Knight but, in contrast, Edward Scissorhands fit the fanciful director’s predilections like a glove over razor-sharp fingers. In its gentle depiction of a man-made entity’s trials and tribulations, the well-received film not only references Frankenstein (1931), but seems equally inspired by Pinocchio, Astro Boy, Adam Link and The Elephant Man. The film starts like a dark joke, as Avon lady Peg Boggs (Dianne Wiest) visits a spooky castle to find Edward (Johnny Depp), the incomplete creation of an old inventor (Vincent Price in his final film role). 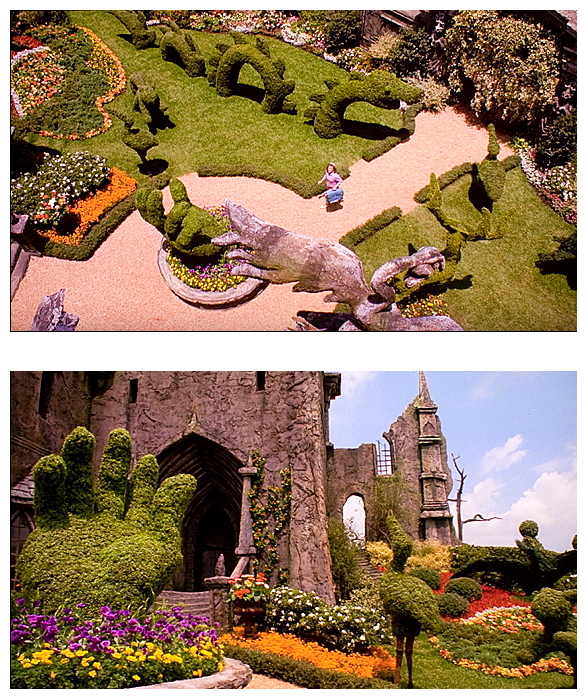 Edward is an innocent suddenly thrust into a world of bewildering emotions. Nurtured by Peg, a caring humanist foster mum, Edward is incorporated into her thankfully decent family with reasonable success. Fair-minded patriarch Bill Boggs (Alan Arkin) is a typically unflappable suburban dad, while little brother Kevin (Robert Oliveri) gets off on the cool weirdness of his houseguest’s appendages. Even nosey locals are fascinated and charmed by this unexpected super-generous hairdresser in their midst, until his inherent strangeness and their own bigoted insecurities transform adulation to mindless hate. And yet, like most great fairytales (even those set in suburban wastelands) true love trumps all inevitable conflicts. Blonde, bright-eyed, bushy-tailed Kim Boggs (Winona Ryder) is like a living angel to the mesmerised Edward, his ongoing inspiration not only during the course of their initial encounter, but also after many decades of separation. His decision to remain alone in his father’s old castle, using those remarkable scissor-hands to shred ice into Christmas snowfalls for the very community that loved/hated him, is a magical messianic role for this alienated creature. We fully understand that Kim, now an old woman reading bedtime stories to her granddaughter (Gina Gallagher), still loves him and always will. 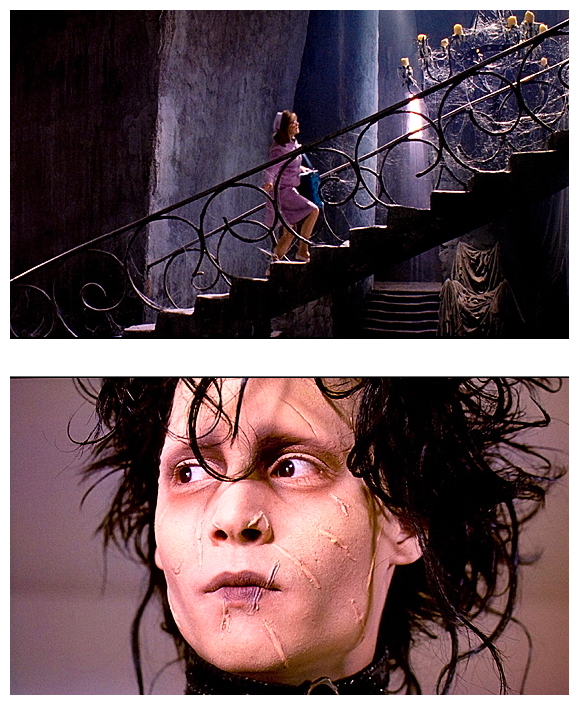 The film’s excellent cast includes two Oscar nominees (Johnny Depp & Winona Ryder) and two Oscar winners (Alan Arkin & Dianne Wiest). Something of an iconoclast, Depp has always tried to go his own way in movies while still retaining a wary speculator’s eye on the main chance. Following television success with 21 Jump Street and minor roles in A Nightmare On Elm Street (1984) and Platoon (1986), he hit the big-time with the title role of Edward Scissorhands which, unfortunately, eclipsed another better film he starred in that same year, Cry-Baby (1990) directed by John Waters. A heady imaginative mix of music and the grotesque has ensured Cry-Baby’s long-lasting cult success in more enlightened movie-going countries. Depp proved he could really act in both the enjoyably quirky What’s Eating Gilbert Grape? (1993) and Tim Burton‘s Ed Wood (1994), and his improvisation skills positively shine in Pirates Of The Caribbean (2003) and Kevin Smith‘s Tusk (2014). After beating Gary Oldman, Tom Cruise, Jim Carrey and Robert Downey Junior to the role, Depp was determined to get into character, losing twenty-five pounds to fit into his all-leather costume and refusing any sort of cooling agent while on the set. Method acting is one thing, but one should really reconsider methods if one starts blacking-out from heat exhaustion due to the extreme temperatures and the costume, as Depp did on several occasions. 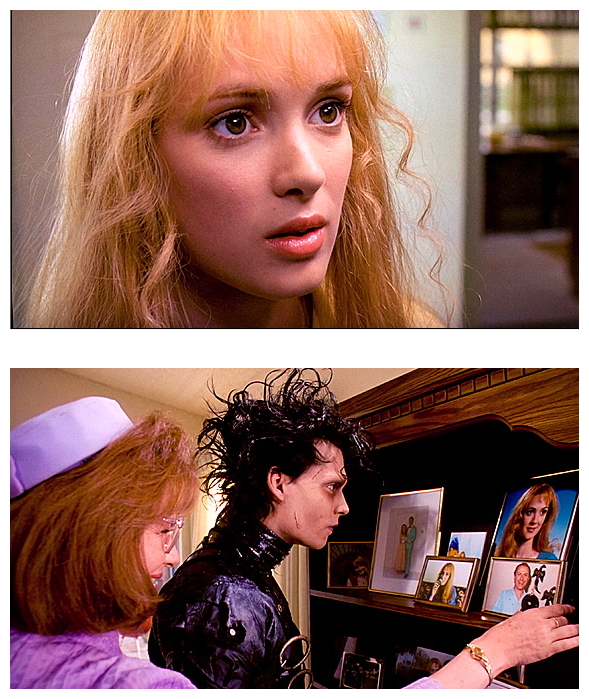 With her unconventional childhood (Timothy Leary‘s god-daughter) and delicate good looks, Winona Ryder might have easily drifted into ‘feisty victim’ movies, but her winsomeness is cut with intelligence and her art with cunning, as she showed from very early on, as Jerry Lee Lewis‘s cousin Myra in Great Balls Of Fire (1989). She has chosen well since then, alternating canny commercial fare – Little Women (1994), Reality Bites (1994), How To Make An American Quilt (1995) – with more esoteric material – Mermaids (1990), Night On Earth (1991), A Scanner Darkly (2006). If she continues to ignore her agent’s advice and remembers to leaven her moneymaking with riskier projects such as The Crucible (1996), she is sure to have a career to be proud of. Now I really should talk about Vincent Price who, after all, was one of my biggest fans. We’d worked together in a lot of films, but one that particularly stood out was The House On Haunted Hill (1959). You may remember him in such classic roles as Egghead in the Batman television series, or as The Abominable Doctor Phibes (1971), or you may remember him from one of his last classic films, The Thirteen Ghosts Of Scooby Doo (1985). 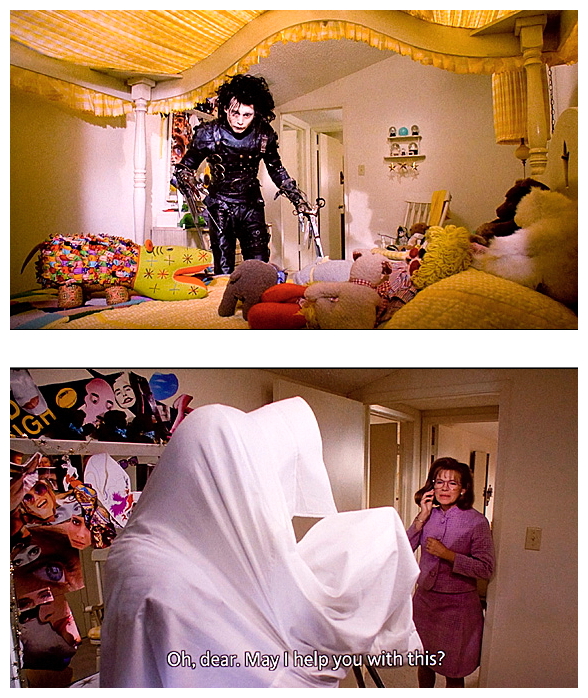 That was the thing about dear old Vincent, as long as it kept him in gourmet meals he didn’t care what he appeared in. Half the budget of Thirteen Ghosts Of Scooby Doo went on his wine list. His performance in Edward Scissorhands is admirably restrained, one of his best performances ever, both hospitable and sinister, despite being terribly ill with emphysema and Parkinson’s disease at the time. This is one of the best things he’s ever done, along with that divine salmon mousse that I used to smear on myself at his dinner parties. Vincent should also be remembered for his versatility, after all, he was the only actor who could go from playing a romantic rival in the noir Laura (1944) and Leave Her To Heaven (1945) to, um, well, Doctor Goldfoot And The Girl Bombs (1966). It wasn’t just the girls that bombed. Yes, I am aware that some people have called him a ham, but haters will hate. Vincent was a good friend and I would never say he goes over-the-top (even though I’d heard his performance as Goldfoot was captured by the Hubble telescope). 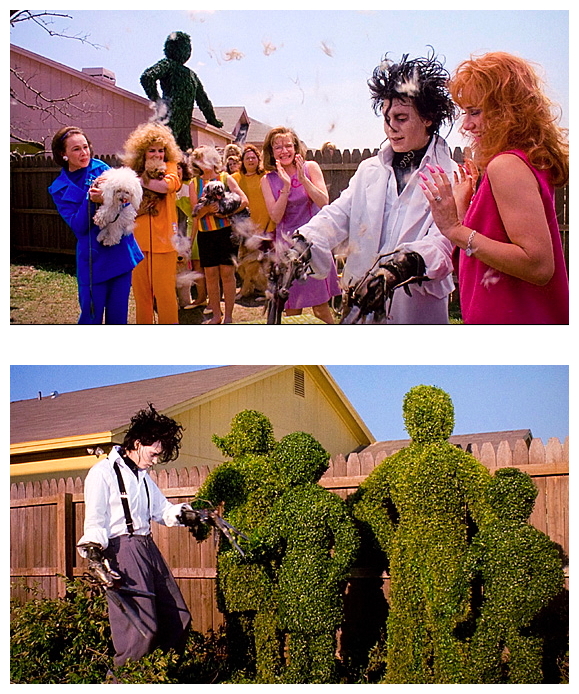 While the actors, their characters and emotions take centre-stage, Edward Scissorhands is also a breathtaking catalogue of technical achievements, from the remarkable scissor-hands themselves (developed by Stan Winston) to fanciful art direction and set design. The inventor’s laboratory embraces a Willy-Wonka-like absurdity, while the pastel-coloured suburban universe serves as an ironic counterpoint to the scary (but benevolent) castle on the mountain. Finally, bridging all these diverse elements is Danny Elfman‘s soothingly ephemeral music score, suggesting childhood lullabies and eternal unrequited yearnings. The extras on the DVD I recently viewed (Edward Scissorhands Anniversary Tin Box Edition) included two audio commentaries: 1. Director Tim Burton sounding laid-back and charming, and 2. Composer Elfman with details about the music (which has some rather long gaps). 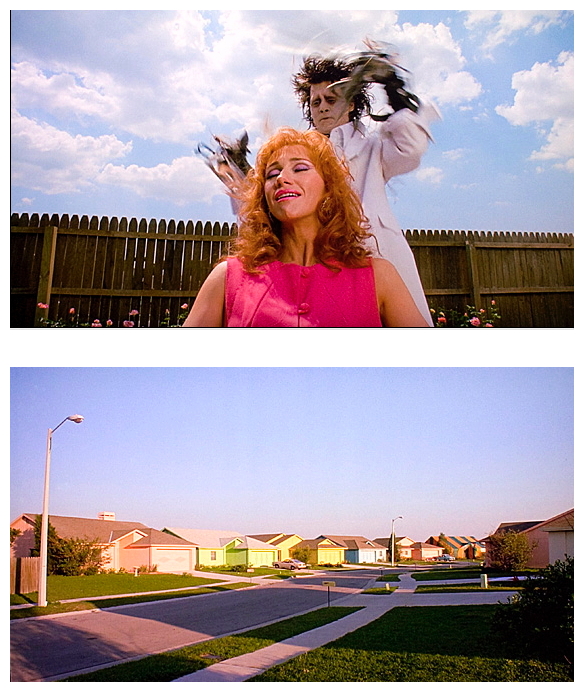 You may have guessed Edward’s hairstyle was inspired by Robert Smith of The Cure, but did you know Burton actually asked Smith to compose the entire soundtrack? Smith had no idea who Burton was and passed on the opportunity, so Elfman was given the job instead. Good thing too, as Burton declares Edward Scissorhands is still his favourite soundtrack of all his films. These are pretty good as modern Hollywood DVD commentaries go and there is more to say about the film than you might expect from simply watching it. The so-called ‘featurette’ is hardly worth mentioning, a short (less than five minutes) publicity release filled with sound-bites from interviews. I’ll now leave you with these wise words from critic Marc Lee as published in The Daily Telegraph: “Burton’s modern fairytale has an almost palpably personal feel. It is told gently, subtly and with infinite sympathy for an outsider who charms the locals but then inadvertently arouses their baser instincts. Depp is sensational in the lead role, summoning anxiety, melancholy and innocence with heartbreaking conviction, and it’s all in the eyes – his dialogue is cut-to-the-bone minimal.” With this in mind I’ll bid you a fair fondue…frail frond? Frontal fondle? Ah, a fond farewell until we meet here again in seven days so I may bewilder you with another amazing oddity on the best website with the worst films ever: Horror News! Toodles! 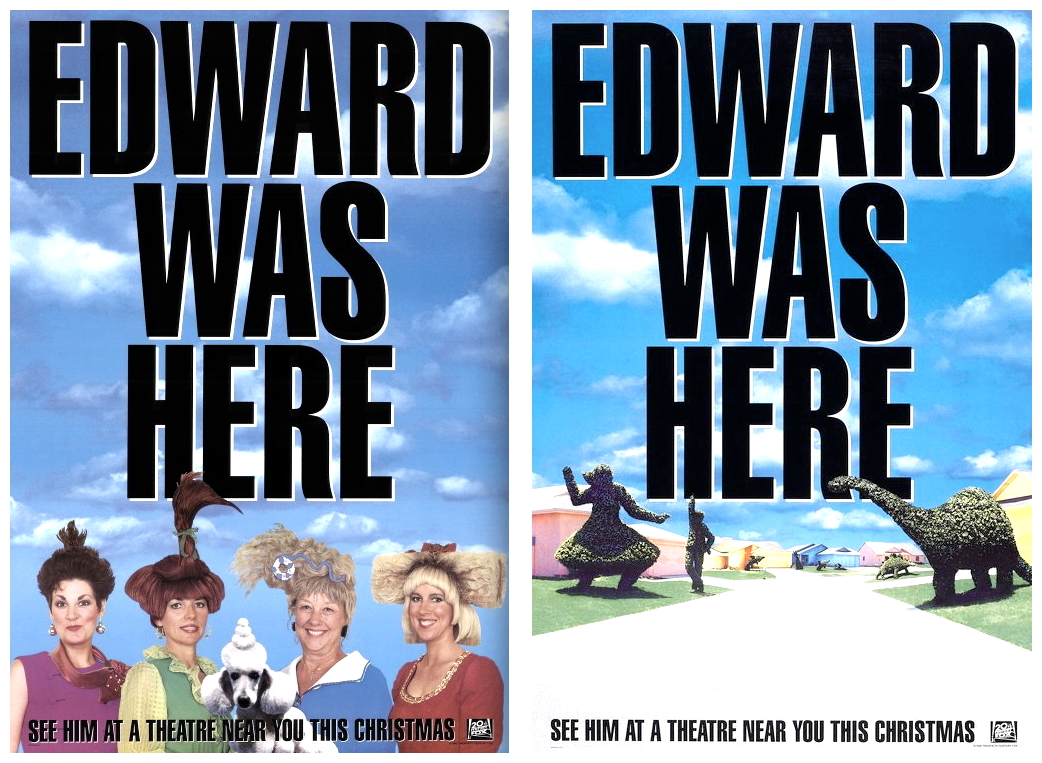