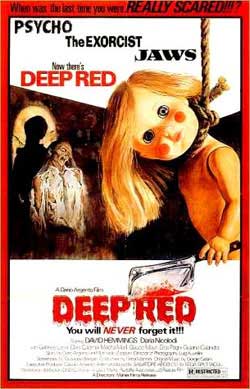 A highly gifted German psychic is brutally murdered in Rome on a quiet evening. A jazz pianist witnesses part of her murder from the streets and races to help the gifted psychic. From the apartment he captures a glimpse of what could be the murderer. Human curiosity and drive ensues.

Alright, the giallo style of film can be quite unusual to the American senses. The truth is they are. Deep Red is another Argento classic that is full of heavy duty psychological booby traps. It can be slow for many individuals. Pace is something that I hear complaints about frequently. While pace is important for me, if a film has pulled me in, I will stick with it. Also in this film it is a mix of Italian and English dubbing. Essentially, the most important dialogue is in English and the jibber jabber is in Italian. A very strange racket to get used to, which was done with films in Argento’s work. 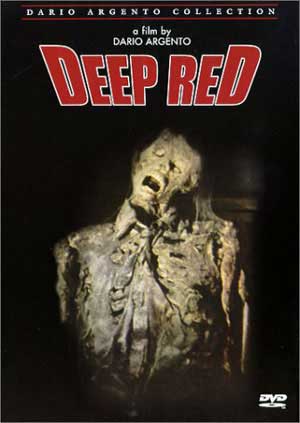 This is a classic murder mystery. I will say you must certainly have a keen eye and pay close attention to what you are seeing. It is one of the main things I found entertaining about Deep Red. The beginning scene with the psychic Helga Ulmann played by Actress Macha Meril has a very Scanners like feel to it. You will know just what I mean when you see it. Helga is such a gifted psychic that she is bombarded by so many thoughts it can become difficult for her to function. Suddenly she starts picking up a “twisted mind” in the audience and becomes tormented by terrible visions and scenes of murder and blood in her mind. This is a public event so no one knows of course to whom she refers. 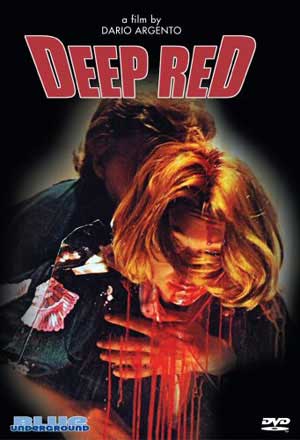 There is no doubt that many writers and directors have been influenced by this film. It is more than amusing to see elements from so many ultra modern horror films display themselves here. Just when you think things are going to present themselves cliche….wham! They don’t. That lends a great creep factor to Deep Red. You literally start to feel uncomfortable. The character of Marcus played by Actor David Hemmings is essentially the viewer for this film. 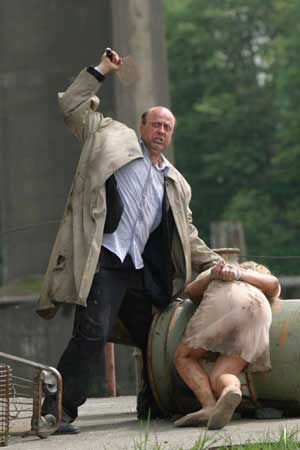 He lives in the apartment right above the murder victim and if you might have seen the killer…what would you do? At least he is not foolish, he is cautious and intelligent about his own self detection. Marcus befriends a reporter Actress Daria Nicolodi, who helps him with his interest regarding the murder. She is sort of quirky as a character but between them there is actually a few scenes that involve some comic relief. The film really does get high tension at points. There are all the classic and interesting colors and camera angles that Argento cleverly fits into his films. The Helga’s apartment is quite creepy with all the mirrors and dark paintings about.

To go too far into Deep Red without creating spoilers is difficult. Most scenes are clues, taking that away from a first time viewer I simply won’t do. You will probably find yourself reviewing certain particular scenes in this film over. It grants its share of willies. Deep Red is not amazing for me, but it is certainly a wonderful psychological horror piece. You will notice that for 1975 it really contains many unique elements that others have bit from or been inspired by. See it through. You will want to know the killer and the motive. The film is thorough I will add. So thorough, that it was cut down twice for the American version. These giallo films can really grow on you, they form an acquired taste. Give Deep Red a try, it could create a wondefully unexpected impression.