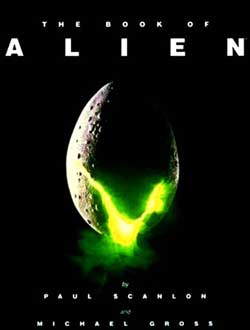 Titan Books brings life back into the 1979 book “The Book of Alien“. And rightly so on the celebration of the film “Prometheus” rounding out in theatres. “Alien”, the movie, has been a huge inspiration over the years to horror fans worldwide. It’s elegant designs, creepy atmosphere, and brilliant induction into the horror realm has made it one among the favs. This book pays tribute to its fans with a impressive helping of information about and within the film. In fact we are taken back to the time when the film first debuted (also in 1979) with a very cool overview of the work that went into this monumental piece.

Many of us know that it was H.R. Giger’s work that really set the design style for this film, but what you probably don’t know is all the pre-production work that occurred prior to it even shooting. It was the film that “almost” wasn’t made. And judging by the number of drawings (listed as 1000’s) it was the film that could of gone any number of directions in its look and feel. I think I speak for us all when I say…thank God it ended up going the direction that it did. And of course thank God that director Ridley Scott was so adamant on specific directions with the way he wanted the alien creature to be presented.

It was revealed that Ridley Scott insisted that the creature never fully expose itself in full form through the movie (preventing it from becoming a creature walking back and forth across the set). The beauty here was in the eye of the beholder using this creature to only “suggest” its true film thru much of the film. We read about Giger’s need for animal bone parts laying around while he sculptured the intricate work that went into its design. We read about the goal of projecting the alien as 3 transformations into full maturity. We learn about the incredible amount of work Ron Cobb put into this project in effort of getting it perfect to vision for Scott and the others.

See the large variety of spaceship designs that never transpired only to lead us to the ones that did. Or how about that alien face hugger and its variations of the original model? Did you know that originally it was a much larger beast that “perched” itself onto the face of its host? Maybe your interest lies in the original art pieces that has this face hugger looking like some sort of demon hand parasite?

The pages are littered with great original illustrations that show the progress and suggestions along the way. The book features the work of H.R. Giger but not to the extent of it “solely” being another Giger art book. It’s Cobb’s work here that gets the whole production started even showing us early concept pieces that have the alien looking like a turkey or creature that you’d except to see from “Men in Black”.

Photos, sketches, paintings, parts, and killer set photos make this edition a “must see”.I really enjoyed the process and the amount of scrutiny that the makers of this film endured to get it to proper vision. This edition has a fair amount to pick thru.

Wondering about the scenes that never happened? Or maybe the sets that were supposed to be built that had to be cut? It surely would have been a different film with these additions, but for now we’ll have to suffice with the final product realization. “Alien” is remembered for a good reason. It’s needs went far beyond the typical science fiction film with a huge organic set structure championed by Giger’s unique erotically bio-mechanical artwork.

Great colorful pages with a worthy helping of behind the scenes narrations to educate us on the ways of this fanatical production. The book is soft cover with a total of 112 pages. At $15 its is highly recommended as a vital piece to your horror film literary library.