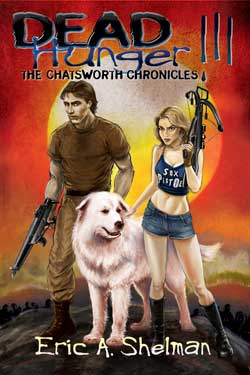 DEAD HUNGER III The Chatsworth Chronicles
By Eric A. Shelman

It’s evident within entertainment circles the genre of zombie lore has no intention of easing up and continuously blazes like wildfire in terms of popularity. With regular television series, movies, animation, live stage productions, video games it’s only natural novels will continue to make leaps and bounds catering to mass audiences. At the head of the pack is one Eric Shelman who has attained certain reanimated notoriety with his series Dead Hunger. The stories take place in a post-apocalyptic setting. The survivors of the undead plague vie to stay alive and regroup towards a new beginning in civilization.

The first novel, The Flex Sheridan Chronicles is narrated from his own first person persona while the sequel DH2 is delivered from his wife’s perspective Gem Cardoza. Part three aptly picks up this time from Hemp Chatsworth’s perspective, the brainy scientist of the group. It fills in some cracks previously left to the imagination in terms of where each of the characters were when the infected became so prominent.

In my review of DH2 I had gotten a little too indulgent in terms of synopsis and plot spoilers. This time around I’ll refrain from such temptation focusing on what makes this novel and the entire series so delightfully addictive and compelling. The majority of readers ranging from daily, avid literature connoisseurs to the casual browser are all unanimous in their regards to The Chatsworth Chronicles: once you pick it up you can’t put it down. Posted in another review of the tale, one admirer stated that although he knew he had to be up for work in a mere four hours, he couldn’t put it down and read the entire tale in one sitting.

So what makes Dead Hunger so insatiable unto the imagination? How do Shelman’s efforts differ from other horror fiction out there?

For one, the author has a tendency to march to the beat of his own drum. All clichés aside there are certain carnal rules of contemporary commercial writing that are at times bent, broken and completely disregarded. One may argue this is a negative thing; quite the contrary. Although he utilizes more cursing and swearing within his dialogue to make most men at a truck stop blush he just as quickly reminds us that this is a brave new world, struggling to cope within a surreal circumstance. Needless to state all bets are off so if a child wants to utter the occasional f word then the deed seems to merit a little over sight. Let’s face it in a new society there will be many changes and in the bigger scheme of things a little cussing seems pretty minor. In fact the characters seem all that much more human to us and we empathize their individual and collective turmoil.

Many editors struggle with budding prospective writing talent in forewarning them not to use the same character names or similar sounding names in the same tale. It can distract the reader in and confuse a lot of crucial plot points. If we’re taking interpersonal inventory on character development it can be somewhat frustrating to the audience. As there are two characters introduced Victoria and Vikki there are hints that trouble has surfaced. Then just when we least expect it, one of the girls actually mentions she likes the name better than her birth name and given the circumstances of current living conditions who could really argue? It works in this case and we feel a certain attachment or sense of relating. Shelman has a distinct gift in sculpting characters that are endearing, likable and one’s we want to cheer on through thick and thin. As these very minor fallacies are tossed to the wind readers cannot help but admire the author’s innovation. After all wasn’t it Stephen King who revolutionized a more realistic dialogue rather than remain steadfast to literary prose?

We get a concentrated look into the scientific mind of the main character Hemp Chatsworth this time around. His theories and hypothesis of the infected is probed deeper into a tangible understanding, a way to combat the infected that roam seemingly everywhere. While the numbers grow in survivors they unite as one with plans to pick up from Alabama to Concord New Hampshire. There’s some mutiny along the way that churns and conjures some dastardly plot development that is guaranteed to keep engaged. For those of us that may get a little bleary eyed and porridge brained from too much scientific lingo, fear not there is some eloquent execution of timing in presenting a second first person narrative. Hemp’s wife Charlie picks the story telling from a very different perspective from Hemp’s. It’s emotional, well thought and touching. Shelman is tremendously versed in conveying varied personalities and well in tuned with a wide spectrum of realistic thoughts, actions and feelings.

The exchange between Charlie and Dave Gammon (yes you read that correctly Dave Gammon is back and a major character within the tale) is humorous and alluring as we wonder how the opposite sexes will fair with one another under a rising tension scenario. Some classic on- liners are fired off here that will likely have you quoting them among friends in no time.

A new terror is introduced this time as well. Without divulging any spoilers let’s say our band of Flex, Gem, Hemp, Charlie and others now have to face another dilemma aside from fellow man being infected and corpses exhumed from the earth. Suffice to say this plot twist will in all likelihood make your skin crawl and give you the creeps in bona fide chilling fashion. It’s horror at its finest tweaking upon your nerves at the precise moment when your guard was let down to interact with the very personable, likeable characters. It may evoke repulsion in others but undeniably our protagonist’s perils contribute to some most spell binding terror for one and all.

Whether you’re a fan of the popular subgenre in horror reading, appreciate a good old fashioned end of the world story or even a feel good comedy with dark overtones DH3, The Chatsworth Chronicles is a solid read. You just may find yourself insatiable for more.