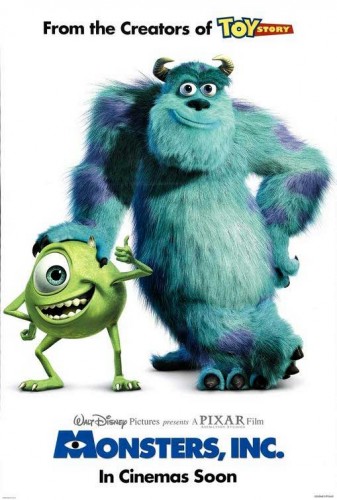 SYNOPSIS:
“James P. Sullivan and Mike Wazowski pick up their paychecks at Monsters Incorporated, the utility company that generates energy from the goose bumps of children. Sulley, the Number One scream-generator at the plant accidentally lets in a little girl into the monster world. Since monsters are actually terrified of children it’s a major cause for alarm and a major headache for Sulley and Mike.” (courtesy IMDB)

REVIEW:
Every kid knows there are monsters. Whether lurking in the darkness of the closet or amongst the dust-balls beneath the bed, monsters are an integral part of childhood. As Newt said in Aliens (1986), “My mommy always said there were no monsters – no real ones – but there are.” A fact reiterated by the colourful 2001 animation collaboration between the digital wizards at Pixar and the marketing wizards at Disney – but what we didn’t know was that monsters are more scared of us than we are of them.

Monsters Incorporated is the leading utility company in Monstropolis, a cavernous nightmare factory that refines the screams of terrified children into a clean and dependable energy source to power the city. Using a multitude of inter-dimensional doorways, the monsters infiltrate dark bedrooms to fill their daily scream quota, but when it becomes apparent that today’s kids have become increasingly difficult to scare, a power crisis looms. It’s then up to the company’s top scarer, an amiable blue-furred critter named Sulley (John Goodman) to put the frighteners on this brave new breed of tots.

But there’s rivalry among the ranks as the slimy salamander-like Randall (Steve Buscemi) attempts to seize the top spot by using unscrupulous methods. When Sulley discover a still-active door, the unthinkable occurs – a pint-sized intruder invades their hermetic existence. “There’s nothing more toxic or deadly than a human child!” declares the crab-like CEO Henry J. Waternoose (James Coburn) – a sentiment undoubtedly shared by those who have witnessed Justin Bieber. Christening the feisty two-tear-old ‘Boo’, Sulley and his monocular flat-mate Mike (Billy Crystal) must return the little girl safely to her world, a complicated feat that culminates in a dazzling door-conveyer chase sequence. 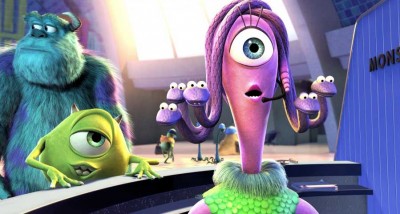 Pixar and their Luxor Junior desk-lamp logo have since become synonymous with excellence in animated entertainment, but unlike the more real-world-based scenarios of Toy Story (1995), A Bug’s Life (1998), Finding Nemo (2003), The Incredibles (2004) and Cars (2006), the premise of Monsters, Inc. (2001) provided the Pixar animators with an additional imaginative challenge. The superbly conceived and immaculately detailed alternate realm of Monstropolis had to be designed from the ground up – a mirror image universe populated by all manner of weird and wacky creatures but essentially governed by the same rules and lifestyles applicable to the human world, like dinner reservations, television commercials and corporate corruption. 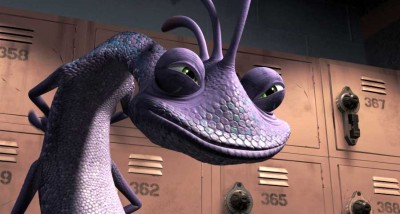 Pixar assembled some top-notch talent to breathe vibrant life into their monstrous menagerie. While the double-act of John Goodman and Billy Crystal might seem like a dubious duo for a live-action buddy flick, their ebullient contribution to Monsters, Inc. forges an endearing screen pair to rival pixelated pals Woody and Buzz Lightyear. 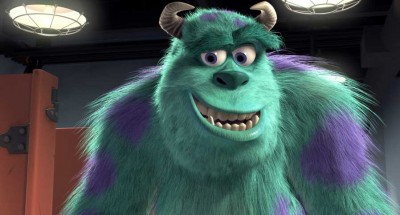 Primary animation actually commenced after the actor’s voice recording sessions, allowing the Pixar team to deftly capture the characteristics and nuances of the monster’s human counterparts. Sulley is essentially a big blue furry version of Goodman and easily one of the most fully-realised digital creations to inhabit a film, next to Gollum of The Lord Of The Rings (2001), while the scheming Randall is as much Steve Buscemi as was Mister Pink in Reservoir Dogs (1992). James Coburn does his best impersonation of Paul Frees as CEO Henry J. Waternoose. Henry is the third generation in a distinguished line of Waternooses who have run Monsters Incorporated. Grandfatherly but also multi-eyed and crab-like, he’s a real ‘company man’, as is Celia, played by Jennifer Tilly. She is the company’s tireless reception and first point of contact, a luscious one-eyed babe with Medusa-like locks and ear-piercing voice. Celia is quite smitten with the equally monocular Mike. 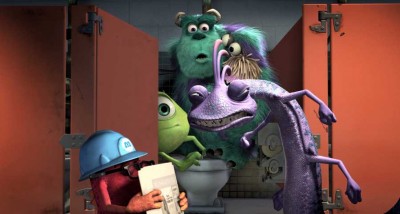 Basically created by committee – Pete Docter, David Silverman and Lee Unkrich – Monsters, Inc. does lack the John Lasseter magic touch that made Toy Story and A Bug’s Life such classics, but it’s more a case of the film being geared toward a core audience requiring reassurance that monsters are harmless, than any directorial dereliction of duty. But that’s not to say there’s a shortage of in-jokes for the grown-ups, it’s all just a little more ingratiating.

The DVD I viewed boasts an eye-watering transfer (created directly from the digital source) and more extras than you’ll ever need, the relentlessly cute and instantly endearing Monsters, Inc. is just as essential as the other Pixar titles – but if you refuse to believe that monsters are just a big bunch of big scaredy cats, just re-watch Nightbreed (1990), and you’ll soon know better. Anyway, please join me next week when I fish-out more celluloid slop from the wheelie-bin behind Fox Studios, and force-feed it to you without a spoon, all in the name of art for…Horror News! Toodles!