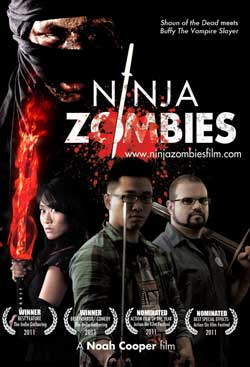 What do you get when you combine the deadly ninja with the horrific zombie? Amazing action sequences, suspense and scares, gore, violence and plenty of laughs! On the surface, Ninja Zombies is an action-comedy-horror film, or a zom-com with martial arts. At it’s core, however, it’s a film about friendship, growing up, and accepting responsibilities that you never wanted.

When you sit down to watch “Ninja Zombies” (not to be confused with Ninjas vs Zombies which is a movie with an even LOWER budget than this one and made in North America.) don’t expect a serious movie. Ninjas vs Zombies is an amateur production far removed from the likes of Romero (or anything else that has come to shamble across the big screen).

“Ninja Zombies” is a cheesy, campy ninja movie with the inclusion of zombies (if not apparent from the title). This ultra low-budget zombie comedy is pretty close to a home spun product as any I’ve seen, just so you know what’s in store. 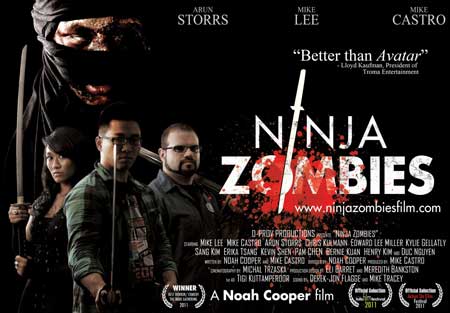 The film is directed by Noah Cooper who has directed numerous short films, in addition to writing 2 feature length screenplays.

“Ninja Zombies” had originated as an animated short film years ago before its live action induction by writers Noah Cooper and Michael Castro. Troma Film founder Lloyd Kaufman makes a cameo (which is plus for this production)

A young landlord with no real job or obligations, begins having nightmares and flashes from the life of a samurai on the run (who tries to rid his world of an evil “Hell Sword” that could raise the dead (the Jigoku no Ken)). Our main character Dameon (Michael Lee) finds out on his 25th birthday that his ancestors left him a trunk containing an ancient sword that will call upon the dead.

The dead begin to emerge forcing him and his friends into battle mode. In the process they discover lessons about life, love, and bro-mance. The sword is referred to a “the Hell sword” (yeah with a name like that you know there is bad news brewing for our hero). 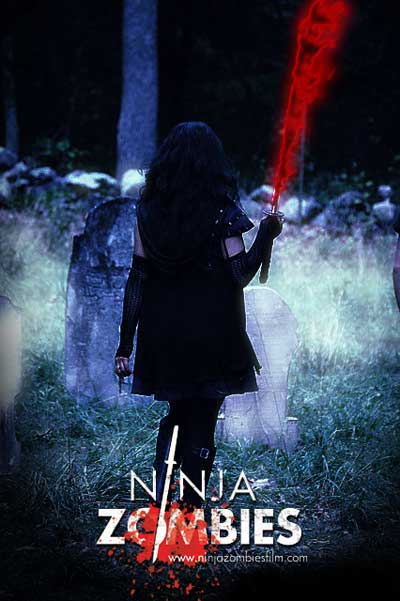 The idea of this film comes across in a campy, but somewhat serious tone. I like the idea of zombie ninjas, even though we have seen the idea of zombie pirates maybe 1 too many times in the pastZombie Ninjas have rarely been used in other medias, unless you count cartoons. Despite its R-rating this film “could” be considered a Cartoon. 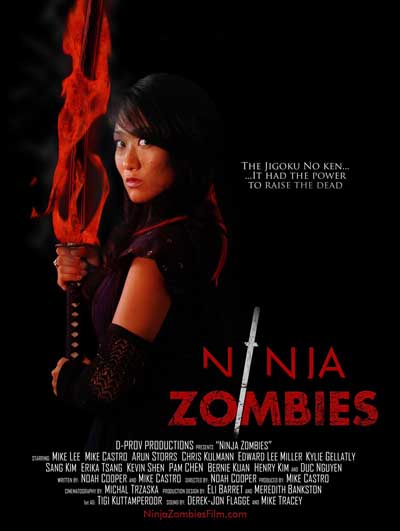 The zombie make-up isn’t bad……nothing special, but it’s “kind of” interesting to see the make-up poking out from under ninja head wraps. The only thing that really stands out effects-wise is every time there’s some blood splatter (and it’s all CGI, unfortunately) it purposely ends up on the camera lens. Why they needed to use “so” much CGI blood is beyond me (they really should have just bought the bucket of corn syrup like very one else does)

This comes across as cheesy and uninteresting. I am reminded of that line from Wayne’s World where he opens a door and says “I just want to open a random door and see commandoes and ninjas fighting” (I think now I want to see Ninja Zombies from ancient Japan fighting commandoes). One thing I love to point out is that these things are from old Japan of 300 years ago. Why is it when you slice them up, the blood is still very fresh? Even with mummies there blood would be dried up and dusty, though I tend to over analyze. 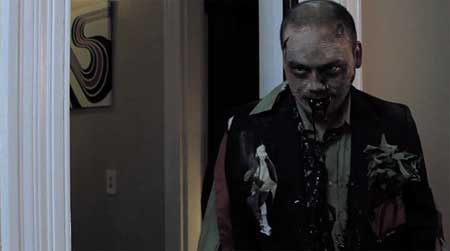 “IF” you a big Zombie fan, it’s worth seeing for comedic aspects alone, however purchase is not advised.