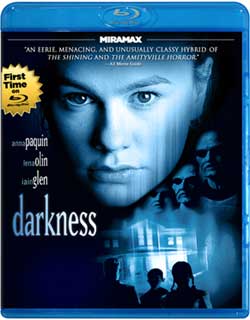 A teenage girl moves into a remote countryside house with her family, only to discover that their gloomy new home has a horrifying past that threatens to destroy the family.

Jaume Balagueró was onto to something with this “dark” horror film echoing its title in not only its story, but as a vital “element” to the story as well. The film almost becomes ironic in being dark natured, darkly lit, and wearing a title that engulfs its atmosphere fully. It was one of Anna Paquin’s earlier films right before reprising her role in X-men 2. Anna Paquin was still an up-and-coming actress that showed great versatility and emotion in her projects (it also proceeded the epic vampire series of True Blood). In “Darkness” she plays the role of daughter Regina.

The setting is located in Spain 40 years later from a horrific past event. An American family (no last name given) has relocated into a countryside house that was previously uninhabited. We get a prologue opener that shows 6 children participating in a dark occult ritual (one that was unfinished). The family consists of Mark (Iain Glen), Maria (Lena Olin) Paul (Stephan Enquist) and Regina (Anna Paquin). Despite the family loving their new locale and setting, Regina only wants to return to her American friends and way of life. We learn that Mark’s father Albert Rua (Giannini) is responsible for equipping them with the house. 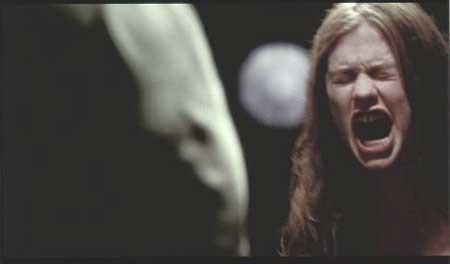 The house holds a dark secret that is itching to come out. It’s haunted by it’s past events that were forever sealed within its foundation. Per the style at the time, we are handed scares in quick frightening collages and shadow lurkings. Viewers who enjoy this style will find all the right segments thrown in for good measure. Horror moments comes with the eeriness of shadow children watching, under the bed tension, figures in the dark, and a few other worthy scares thrown at us. Director Balagueró also tends to focus on the issue of light and being “without”. Despite electrician opinions, the house seems to love its dark moments using the effect additionally to its storyline (the house repetitively loses power).

“Darkness” the film, is centered on the idea that an unfinished ritual needs its final sacrifice. Even with years behind it, “the event” is content in waiting. As this factor draws nearer to its ultimate reveal, the family also begins to become unstable with higher emotional reactions. The father, Mark, instantly feels this change which sets the dynamics in place for further encounters. At the core we recognize that this family of 4 holds a love for each other. This love is also a threat to their well being. An eclipse draws near that marks the perfect moment for completion putting the family’s children at risk. We learn of darker secrets within the family and the events of the past that have haunted this house bringing it full circle to the present. 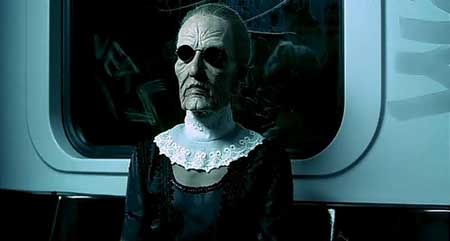 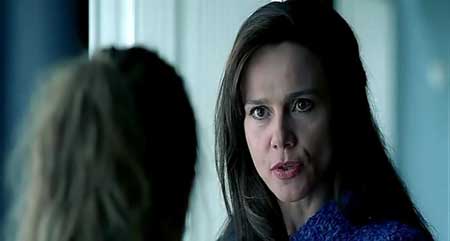 “Darkness” enjoys its edginess ramping up a building towards a “somewhat ambiguous” but powerful ending. Unique in direction, the movie is chock full of ambience imploring a style that combines traditional with modern, making it an effectual thriller .

Director Jaume Balagueró has evolved with each film he creates. His work on [REC] and [REC]2 was simply inspiring with a small handful of others worth the watch. Like these, this film is a great indication of his approach. 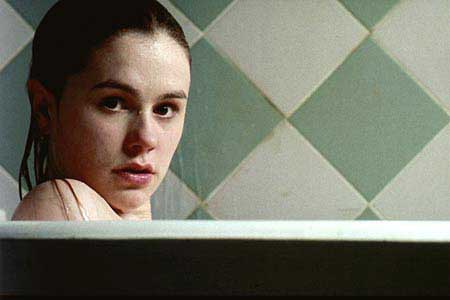 I found that the “Darkness” is one that has garnered different reactions over the years. I myself was instantly hooked with its slow grind shadow-engulfing-visually-kinetic pacing. Others were on the fence claiming it didn’t move at a pace they were accustomed to. Others found its surprise ending to not meet their needs for closing up the package. My take is that we’ve become “way” too accustomed to endings that “feel” that need to end on rainbows. “Darkness” ignores this concept and goes for the guttural reaction….the ultimate darkness, if you may. To me, that is refreshing and unsettling to the celebration of the horror motive itself. In any case, I’ll confess to having seen this film at least 6 times and loving it with each. Fans of Anna Paquin’s earlier work will also love her pure innocence projection that later set the stage for a character called “Sookie”.

Darkness is now available on Bluray per Echo Bridge Entertainment

Darkness is also available per a triple feature bluray 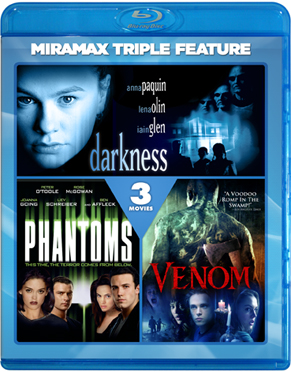