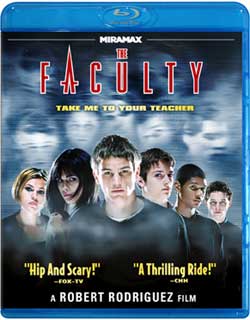 Students suspect that their teachers are aliens after bizarre occurances.

A mash up of “The Breakfast Club” and “Invasion Of The Body Snatchers”, Robert Rodriguez’ “The Faculty” is a fast paced & witty 100 minutes of action that involves the attempted takeover of Earth by parasitic aliens. But rather than start big and begin in a big city like New York or Los Angeles where a lot of other films have had their aliens touch down, these aliens decide to start in the small mid western town of Herrington, Ohio. Start small and finish big I suppose… 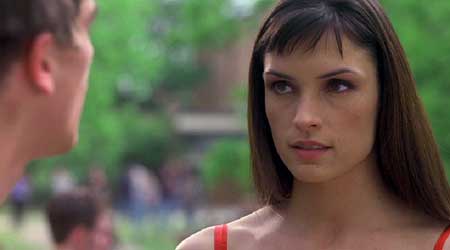 And where do the aliens decide to start once they arrive in Herrington? Why the local high school of course and as the film begins we see fiery coach Willis (Robert Patrick) really tearing into the football team. He’s not too satisfied with the quality of their latest practice and there is a very big game coming up against what he calls “The one team that can beat us”. Quarterback Stan Rosado (Shawn Hatosy) gets singled out for what the coach perceives as a lackadaisical practice session and the two nearly come to blows before Stan is pulled away by teammate Gabe (R & B superstar Usher). Afterwards coach Willis is taking out his frustrations on a bench when he is approached by someone from behind who we never see but the coach turns and sarcastically asks “What”? before the scene fades to black.

From here, the script (By Kevin “Scream” Williamson) smartly leads us into the school and introduces us to the main characters. We meet the titular faculty members and surprise! We are treated to some really good actors here. Bebe Neuwirth (Principal Drake), Salma Hayek (Nurse Harper), Famke Janssen (Ms. Burke), Piper Laurie (Mrs. Olson), Daniel Von Bargen (Mr. Tate) and Jon Stewart (Prof. Furlong). All familiar faces but still not the caliber of actors you might find in a movie such as this one, this cast is a lot better than expected and they all shine! 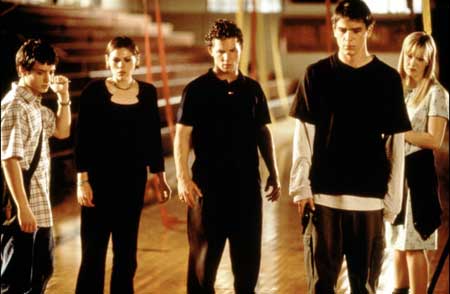 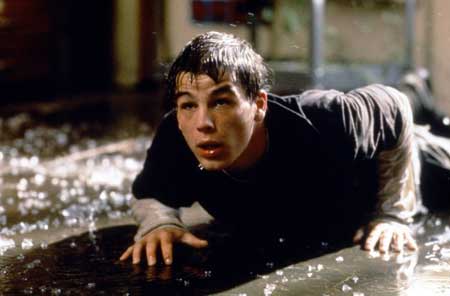 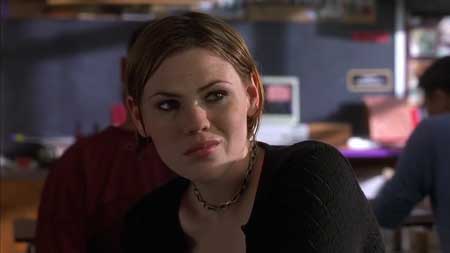 The students are no slouches either! In addition to Hatosy & Usher we get Josh Hartnett (Zeke), Elijah Wood (Casey), Jordana Brewster (Delilah), Clea DuVall (Stokely) & Laura Harris (Marybeth). All of them fill the required stock roles: Stan is the star jock, Delilah is the head cheerleader who’s dating him, Zeke is the underachiever who is a lot smarter than he lets on, Casey is the geeky kid that everyone picks on, Stokely is the loner who has no friends & Marybeth is the cheery new student that is always smiling as she makes the rounds. Again, the film has a real “Breakfast Club” feeling to it as we see how the students interact with each other. It’s fairly obvious that the status quo amongst them is going to change by the time the movie is over but how?

The day after a scene where we see principal Drake get inducted into the “I’m an alien” club by both Mrs. Olson and Coach Willis, Casey finds an odd shaped object as he crosses the football field after eating his lunch in the stands. It looks like a dried up sea creature of some kind and he brings it to Prof. Furlong for identification. Not only is it foreign to him but he seems to think it might be a “New species”, something that has never been seen before. Stokely accidentally spills some water on it and it begins to move as it’s skin hungrily absorbs the H2O. Furlong decides to drop in a tank of water and amazingly what was seemingly dead only seconds before not only begins to swim but as Furlong decides to feel what it’s skin is like, it replicates when he touches it. Unfortunately it grows a set of sharp teeth as well which it promptly uses to take a chunk out of Furlong’s finger with. But what the hell is this self replicating creature and where did it come from?

If you’ve ever seen “Invasion Of The Body Snatchers” or “The Puppet Masters” (Both of which are referenced by the students in the course of the film) then you know that the creature is a parasite that invades it’s victim and then takes over it’s mind. Those who are infected then act as part of a “Hive Mentality”, all acting as one to quickly and efficiently get the town under it’s control and move onto the next set of victims in the next town. And so on, and so on until they’re in total control of Earth. They didn’t count on the kids gathering their resources and despite their differences, mounting a counter assault to find out who the leader is masquerading as and destroying it. They come to the conclusion (Thanks to Stokely having read “Body Snatchers” & “Puppet Masters”) that if the “Queen” parasite is destroyed then all the other ones will die as well, freeing the populace from their thrall. 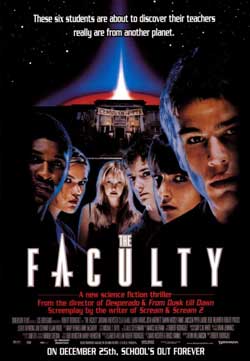 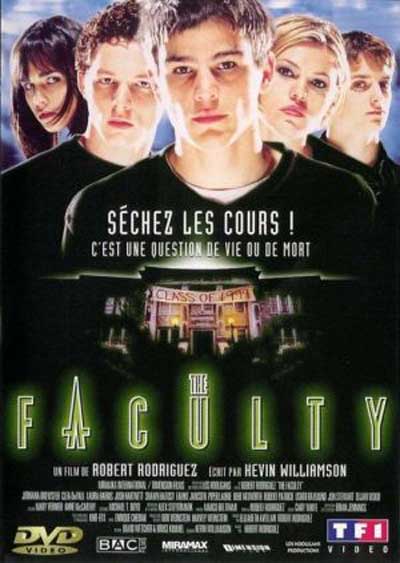 The film is well acted and written. Their are myriad in jokes to be found here if you take the time to look for them. There are also a few scenes that directly reference films as varied as “Carrie”, “Terminator 2: Judgement Day”, “Night Of The Creeps” & especially “John Carpenter’s The Thing”. This might be seen by some to be a cheap way to make the fanboys smile but a few of them are very subtle and they come and go very quickly, you’ll need a quick eye to catch some of them. The way the script cribs the paranoia angle from “The Thing” is a little ham handed and obvious but it still works. This was director Robert Rodriguez’ third full length feature film (After “El Mariachi” & “From Dusk Till Dawn”) and it was the biggest budget and the most experienced cast he had worked with but he proved that he was no one (Actually TWO) trick pony. His directorial hand is strong and his vision of what he wanted the film to look/sound like is successful. He was born to do this and it shows! 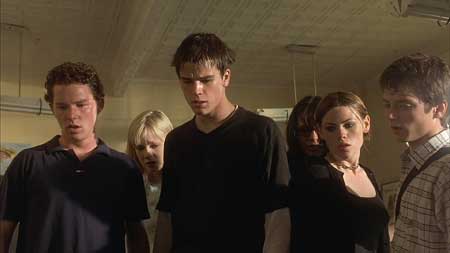 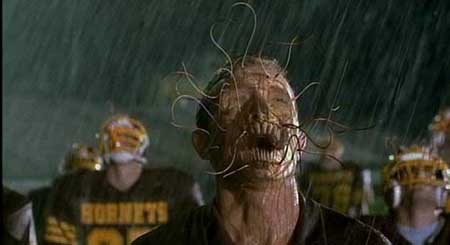 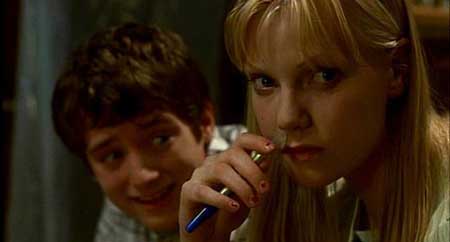 There will be some dissent amongst the masses because of the way the film wears it’s references on it’s sleeve but keep in mind this was a film made for teens and a lot of them might not have read “Invasion Of The Body Snatchers” or “The Puppet Masters”. I’m sure that a lot of them didn’t see “John Carpenter’s The Thing” either, not on it’s original release anyway so this makes “The Faculty” something unique to them. For those of you who picked up on all of the in jokes & references within the film, hopefully you enjoyed the way they were woven into the script. We’re not supposed to over analyze films like “The Faculty”, we’re supposed to enjoy them and if nothing else this film is enjoyable. Thrillingly so as a matter of fact.

I hadn’t seen “The Faculty” in years when my ever so evil editor assigned it to me for review and I forgot how much I liked it when I saw it way back when. It’s still a great movie that is funny, exciting & just a bit scary. There is a bit of bloodshed to be found here but nothing too over the top so if the sight of blood makes you wince, fear not. I rate it a solid four out of five shrouds and encourage you to see it if you haven’t already.

The Faculty is now available on blurray per Echo Bridge Entertainment