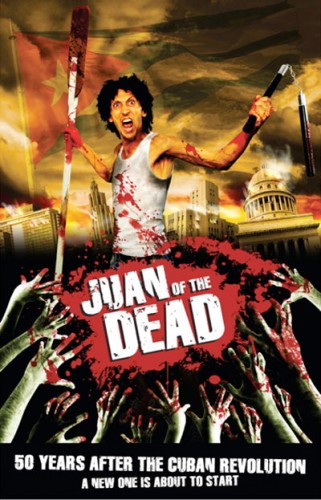 50 years after the Cuban Revolution, a new Revolution is about to begin.

“Shaun of the Dead” set the bar incredibly high for what has come to be known as the “zombedy”. It is by far a prime example of the genre and still reigns supreme. Since then, there have been a slew of zombedies that have ranged from horrible to hilarious but lacked the heart and soul of “Shaun”. The zombie film that I have been most looking forward to seeing the past year has been “Juan of the Dead”. Not only is it Cuba’s first zombie film, it’s the first film since “Shaun” (the “Juan of the Dead” title is an obvious homage) to capture that heart and soul. It’s chock full of hilarity and political satire that would make George Romero proud.

Juan (Alexis Diaz de Villegas) is a slacker. He doesn’t work and spends most his time drinking, fishing, thieving, and fornicating with the married neighbor lady. He, along with his pal Lazaro (Jorge Molina) have a simple life in Havana. That is until they realize that something strange is happening. You see, the dead are roaming the streets and are hungry for flesh. Juan is ready to rise to the occasion…..for a small fee that is. On their adventure they have Lazaro’s son Vladi (Andros Perugorria), Juan’s daughter Camila (Andrea Duro), cross-dressing China (Jazz Vila), and muscle bound beast Primo (Eliecer Ramirez). When business begins to slow down they are faced with the choice on if they should stay and fight or flee to Miami.

The key to a successful film like this is to have characters that you enjoy investing your time in. Juan is basically a loser, a screw up. The film is very much his story and we see a full arc of progression for him. He and Lazaro make some very questionable decisions, though we doubt their integrity, the result of their actions is often hilarious. I’ve heard some people complaining about the main characters being unlikable and I disagree. They never really change who they are but they have the opportunity to redeem themselves and that is part of why I loved the film so much.

There are some really great gags in the film. At least two I had never seen before (I won’t ruin it for anyone). One of the gags I enjoyed was with the character Primo. This guy is just a monster of a man, just huge with tattoos on his face. Yet he faints every single time he sees blood. Some really funny moments arise from it. The zombie make-up looked really good and most the CGI was used when needed and looked much better than average. The film has a very polished look and the $3 million they spent on the film was put to great use. One of my favorite scenes is the hordes of zombies walking along the ocean floor.

Director Alejandro Brugues also found it important to follow in the footsteps of the genres godfather, Mr. George Romero, and fill the film with political commentary. Swipes are taken at Castro, the U.S government, and still manages to show that the Cuban people are strong in the face of adversity.

“Juan of the Dead” was everything I had hoped it would be. Sometimes anticipation is your worst enemy when waiting to see something since the majority of the time you end up disappointed and the film never lives up to our own ridiculous standards. This time, the film does. Everything is dealt out in portions that were always just enough. We all know the saying about too much of a good thing, “Juan of the Dead” was always just enough, a perfect blend of humor, horror, and commentary. Without question a ***** (out of 5) from me and a film that is destined to become not only a milestone in Cuban film history as well as a modern classic of the genre. This is one you shouldn’t miss. 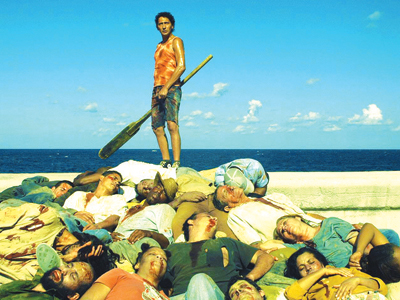 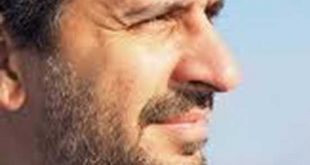