Just when it seemed this iteration of The Dark Side couldn’t get any better, here is issue 148, and it’s an absolute feast for classic horror fans. Billed as a Hammer Horror Special, almost the entire issue os taken up by some truly sterling material on the legendary studio and its legions of films.

The central piece to this exemplary issue of the magazine is a (very) lengthy feature covering the entire history of Hammer, from The Mystery of the Marie Celeste up to the recent chiller The Woman in Black, starring Harry Potter’s Daniel Radcliffe. This feature, by Denis Meikle, is one of the finest pieces of genre cinema journalism that has been printed in the UK in the last twenty years, packed with details which will thrill and fascinate Hammer fans both casual and obsessive.

There’s a superb interview with Hammer legend Caroline Munro, a feature on Hammer’s lost scares, a great interview with current Hammer boss Simon Oakes, a piece on the ladies of Hammer and, yes, a piece with the man himself, Christopher Lee, which is honestly quite bizarre. That Christopher Lee interview must have been tough to both carry out and write up, so kudos to Callum Waddell for making a difficult interview with a legend (which is solely about his singing career, as Callum was ordered not to ask about Hammer at all) very readable.

This is really an issue for the old-school horror fans out there rather than the new breed, but new releases still get the customarily strong reviews from the magazine’s team. In fact, Hammer’s current showstealer, The Woman In Black, gets the best review of the issue, and quite rightly so. It’s interesting to see from the varied reviews not only the strengths and weaknesses of current horror output, but also what makes it out of America and over into other territories.

A very worthy issue indeed, and one that a lot of new-school horror fans should pick up so they may learn more about one of the greatest aspects of this genre that there has ever been, or ever will be.

Tags dark side magazine hammer horror The Dark Side Magazine 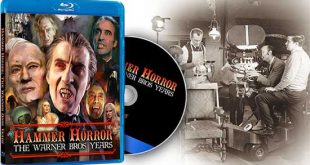