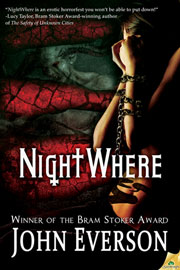 NightWhere: leave your inhibitions (and your soul) at the door

The novel will be released to bookstores in trade paperback form this October, but in the meantime, readers can discover its dark allure through all of the usual e-book sources (Amazon, Barnes & Noble, Kobo, etc). Readers can also get a sample of the novel — you can read the prologue for free on the publisher’s site: store.samhainpublishing.com/nightwhere-p-6803.html.

NightWhere follows Mark and Rae, an oversexed couple who indulge in the “swinger” lifestyle. But Mark is really the follower here; he knows that in order to keep Rae, he has to let her indulge in all of her kinky desires, even those that include bondage and pain. They’ve found a workable, if unusual balance in their marriage… until they get an invite to the mysterious NightWhere, a floating sex club talked about in swinger circles only in whispers. Only those invited gain entry – and the location changes every month. Their balance is quickly ruined as Rae finds the club answers all of her dreams and begins to pull away from Mark. The trappings of whips and chains here are not just trappings. In NightWhere, people bleed. Soon Rae’s unbridled exuberance is noticed and she receives an invite to the club within the club, known only as The Red. She attends NightWhere without Mark, breaking their longtime marital agreement, and then one night, she doesn’t come home. Can Mark find his way back to the club, and can he save Rae from herself… and the ghoulish Watchers who supervise the club and hold the keys to its secret places?

And Lucy Taylor, the Bram Stoker Award-winning author of The Safety of Unknown Cities wrote:

“One thing John Everson’s many fans already know—he’s a writer who does nothing by half-measures.  And Nightwhere, his latest foray into sex, sadism, and the supernatural, takes the reader on a nail-biting ride into the depths of bloodlust and sexual obsession.

On the surface, Rae and Mark might seem just your ‘average’ swingers, out to spice up their marriage with some kinky thrills. Little does Mark realize that while his idea of a wild time might be sex with a couple of hotties and a light whipping, Rae’s tastes are infinitely more perverse.

And while Mark fights desperately to save Rae from the thrall of Nightwhere, aided in his quest by the mysterious Selena, Rae learns how to test the limits of taking and dishing out pain—and finds herself terrifyingly adept at both!  Addicted to the rush of sex and slaughter and spurred on by a malevolent mentor named Kharon, she descends into a nightmare realm of depravity and mayhem.

For those who wanted something deeper, something darker than the titillation of Fifty Shades of Grey, this is the book you were hoping for. Don’t miss your chance to be a voyeur in NightWhere… but don’t let the Watchers suck you in too far!

For those attending the annual Horrorfind Convention in Gettysburg, PA this August, Everson will be appearing there and will be doing advance signings of the trade paperback edition of NightWhere in the Samhain Publishing booth.

For more information on Everson and his work, visit his website at www.johneverson.com.