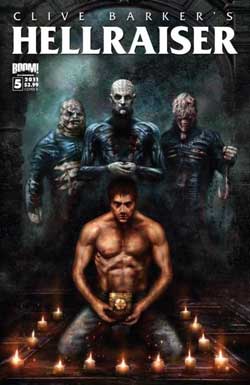 Samuel Hess is back, killing without pity for his cenobium masters. As he tortures those in waiting, it’s ultimately the box that he seeks. Kirsty hot on the trail of Hell’s demons leaves Nebraska to pay ol Hess a visit. This time it’s a few of his tortured victims she aims to save. But Hess is not able to withstand the tormenting desire of opening the box once again. Pinhead, as always, is on hand to abide to the call of the box’s desires.

With all Kirsty’s past behind her and all brutally murdered, she must face the treacherous but poetic Cenobites once again. It’s all the usual blood bath as we expect with the 4 primaries coming forth. Though always hard to figure out, Pinhead sacrifices his soldiers, Female Cenobite and Chatterer to the chains of hell. Hess, a loyal servant gets to pay the ultimate price of being at the mercy of Kirsty. Kirsty doesn’t hesitate for a second in blowing Hess’s brains back to the Hell that spawned him into this world.

Pinhead yet makes another deal, as he confesses that they are only demons making deals with devils. Kirsty has but no choice to hear him out and abide by his manipulative wishes.

Another round of flesh meets pain! You got to love those Cenobium demons and their knack for showing up in the face of chaos. Some great illustrations here in this issue #5 which only proves the talents of the Boom team artist Jesus Hervas with authors Barker and Christopher Monfette.