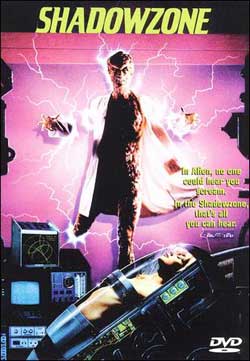 After someone is killed in the subterranean project called “Shadowzone,” a NASA captain is called in to investigate. In the project, sleeping subjects are induced into a deep EDS state whereby they become portals to a parallel universe. Unfortunately this causes adverse reactions in the subject, and something gets through the portal, the consequence of which is an attrition problem.

Shadowzone works heavily within a genre already established by films like Alien and The Thing, movies where advances in science have actually put people in danger because of entities uncovered. Shadowzone takes place in an underground laboratory, where scientists have been exploring the abilities of the human body and the essence of deep sleep. The deep sleep, called EDS, could be used for NASA’s space exploration, but it could also allow a shape-shifting intelligence from an alternate universe to travel through a portal created by the deepest stages of sleep. 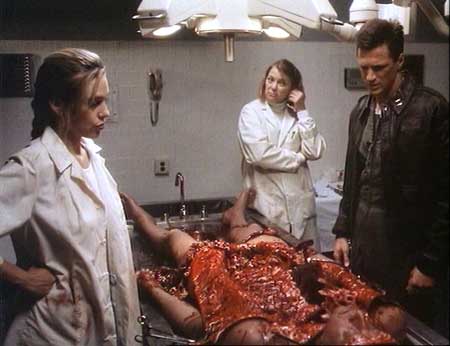 The opening of Shadowzone works really well because of the strange atmosphere of the laboratory. The protagonist Hickock (David Beecroft), who has been sent to examine the experiments in the Shadowzone because of a recent test subject’s death, traverses this underground laboratory, and nearly everyone acts like they’ve got something to hide. When he gets to Shadowzone, a number of odd things happen – there are rats being served up on platters at dinner, there’s no end to the health code violations found within the kitchen and dining areas, and there’s also a dead body split open on an autopsy room table with blood splashed about the walls. It’s a grisly first encounter with the Shadowzone project, and the eerie nature resonates throughout the film as the tension builds and the main conflict escalates.

With the emphasis on weirdness and spooky happenings, though, comes a lack of characterization for the scientists working on the Shadowzone project. There’s nothing about the five people that Hickock meets to really establish them, besides perhaps Dr. Erhardt (Louise Fletcher), who has a more important role to play. Shadowzone limits how much we actually see of each character, initially introducing them and then shifting back into the storyline about deep sleep and alternate dimensions. The film simply gives the characters a job to do, and when they die, it’s not surprising because they were barely people the audience got to know anyway. 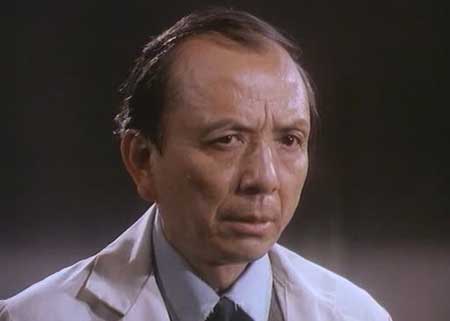 At first, the way Shadowzone splits up its characters works – each of them is assigned a task after the experiment blows out the power in the laboratory and allows a shape-shifting entity that kills people into the lab, and they must break into groups to perform the job. Whether splitting up and traipsing around a dark underground lab with an unseen murderer on the loose is a good idea is still up for debate. However, it still makes sense based on the reality of the situation; things have to get done for the crew to survive, so they split up to get the job done faster. Yet things get weird after they’ve started in on their jobs. One minute a scientist is tasked with cleaning up the lab, the next she’s looking for a lost monkey around the lab, and getting another crew member to look as well. It just doesn’t make a whole lot of sense, since they should be scared out of their wits that an entity is killing all of them one by one. 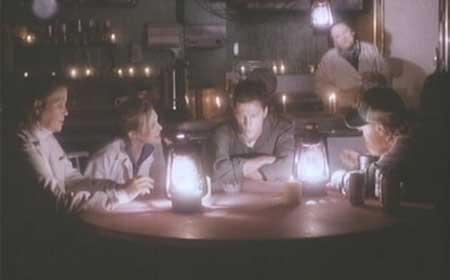 The monster can shape-shift, too, meaning that things might not be as they appear. The monkey turns out to be the entity in disguise; it can also become a giant rat that crashes through the wall. The creativity is there, and it’s actually quite cool that the entity can read the thoughts and fears of everyone in the lab. But it’s also not executed that well, at least not to greatest effect. The moments of tension are destroyed by the monster simply jumping out at the victim, or blood being sprayed against a wall. 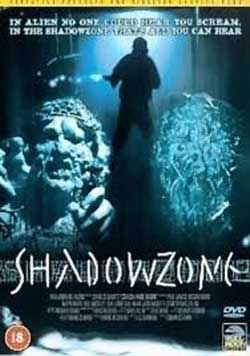 Still, there are some great special effects, including a person’s head spraying blood from popping veins and the same person’s head exploding. A woman’s arm gets ripped off in a gruesome match of tug-of-war, and the autopsy scene is explicitly gory for the opening of the film. If one’s watching Shadowzone for the blood and guts, there’s an ample amount of it.

Where the story is concerned, Shadowzone is not that original, and the themes of science experimentation gone wrong are only present towards the end of the film. But despite the obvious connections to films similar to it, the movie is an enjoyable experience, with obvious thought put into the science of bringing the entity into our world. Shadowzone progresses as one would expect, but it’s not overshadowed by films like The Thing which tackle the subject matter a bit more effectively. 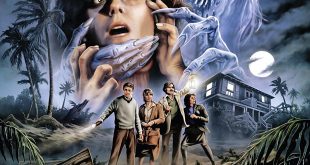