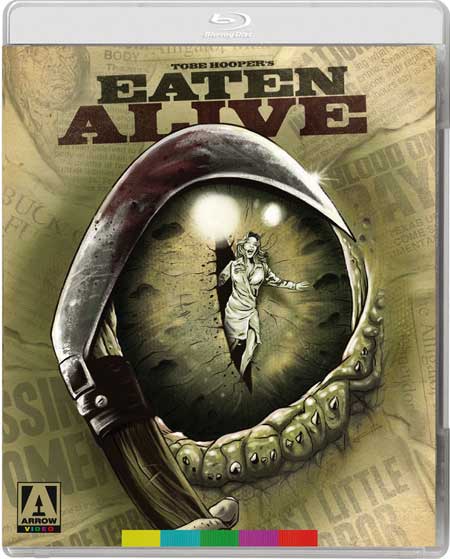 A psychotic redneck who owns a dilapidated hotel in the backwater swamps of Louisiana kills various people who upset him or his business, and he feeds their bodies to a large crocodile that he keeps as a pet in the swamp beside his hotel.

“Eaten Alive” is director Tobe Hooper’s 1977 follow up to “The Texas Chain Saw Massacre” (1974). While it is still a horror film that takes place in the deep South, it is a much different kind of film, and much like “Texas Chain Saw’s” first sequel, deals with a lot of humor, as well as over-the-top violence. 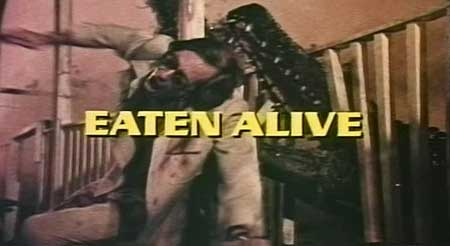 The story starts with an awkward semi-rape scene involving Buck (played by a young Robert Englund) and a young prostitute. Englund has said that the Japanese version of this opening sequence inserted images of a stunt double’s genitalia, though the American version was more tame. 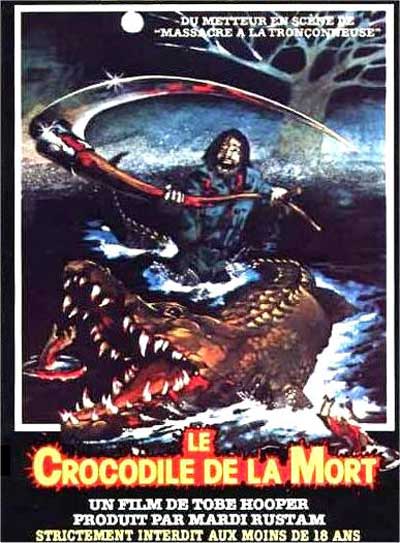 The prostitute leaves her brothel to stay at the local inn, run by Judd (Neville Brand). Judd just happens to be a bit crazy, and has a pet crocodile that lives adjacent to his hotel. Well, as things would have it, he does not like his new guest, promptly kills her with a rake, and feeds her to his pet. This sets the stage for the gruesomeness and humor yet to come. 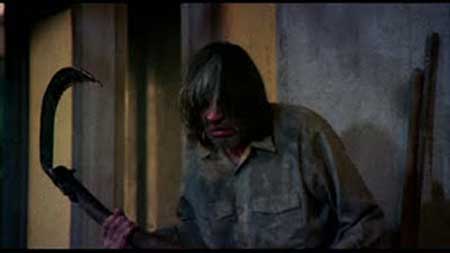 Brand’s turn as Judd is worthy of note. It is stand out. He is absolutely crazy, but not overly so. His small idiosyncrasies add a realism to his somewhat comedic turn. Think of him as a mix between Norman Bates and Leatherface. He was also reminiscent of the more recent “Wolf Creek” (2005) character Mick Taylor (played by John Jarratt). 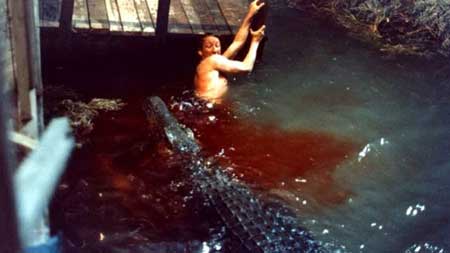 A little later, Harvey and Libby Wood (Mel Ferrer and Crystin Sinclaire, respectively) show up to town, looking for Harvey’s daughter, and Libby’s sister. They see her name on the register at Judd’s hotel, and Judd realize’s this is his latest victim’s family. 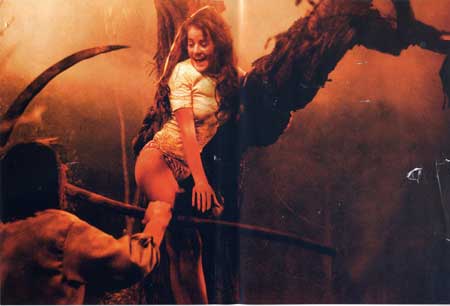 As they go to town to check on their relative, Judd deals with some of his other guests, a small family, who’s mother is played by “Texas Chain Saw” alum Marilyn Burns. After their dog is eaten by the crocodile, and the father goes crazy, Judd stabs him and throws him to the creature. Burn’s character gets tied to a bed for the rest of the film, and their small daughter hides under the hotel porch. 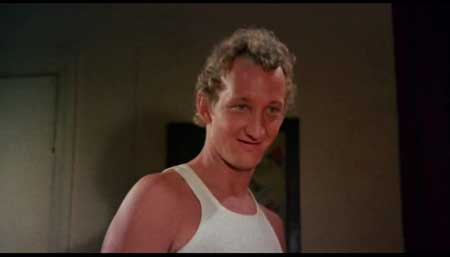 After not much luck finding her sister, Libby drops her dad off at the hotel and goes to dinner with the local sheriff. She meets Buck (who’s name sake was used in Quentin Tarantino’s 2003 hit “Kill Bill Vol. 1”) who accosts a few patron before heading back to Judd’s hotel. Meanwhile, Judd has disposed of Mr. Wood, and is still chasing the young girl under the porch. He also dispatches of Buck and his new philly before Libby gets back. At the climax, all hell breaks loose when Libby finds the woman tied to the bed, and they start being chased by Judd with a scythe, while trying to rescue the young girl from the crocodile on the loose. 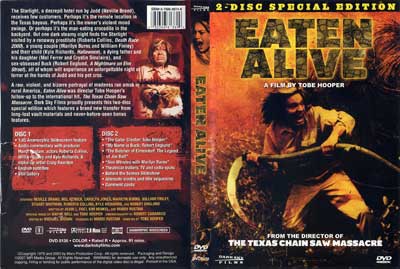 This movie is a bit strange, as any aspect of this story will inform the viewer. But where it shines is its sense of fun. Judd is played humorously, the kills are over the top, and the crocodile is laughably fake. It doesn’t matter though, as long as the audience is willing to have fun with it. The cinematography is fine, but not special. The script is ok. The acting and direction (some of which Hooper was not present for, as he walked off the set before finishing!) are where this shines. Some corny music, with good fight choreography leaves this as a fun and funny piece. 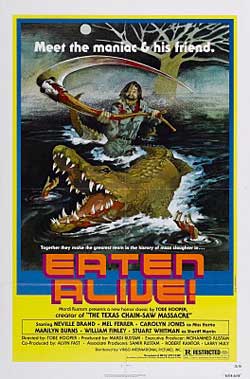 This is the kind of movie that survived because of controversy, as it was a video nasty in the UK during the 80’s. It will continue to get an audience because this is the kind of fare that has stayed fun over the years. It is dated, it isn’t all that scary, but the sense of hilarity throughout, with some tight editing, leads it into a better territory than many other late 70’s b-movie horrors.

Eaten Alive (1977) is now available on bluray per Arrow Films