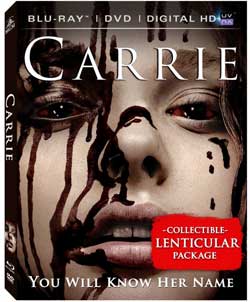 A reimagining of the classic horror tale about Carrie White, a shy girl outcast by her peers and sheltered by her deeply religious mother, who unleashes telekinetic terror on her small town after being pushed too far at her senior prom.

The Black Saint was around when Brian De Palma unleashed his startling and terrifying vision of Stephen King’s first big literary success, Carrie back in 1976. And I remember the distinct feeling of unease that permeated itself throughout the theater as the film unspooled. We were nervous, we were on edge, we were scared. In the years that followed, other directors have tried to resurrect the tale, some going so far as to reimagine it as a Broadway musical! But they all failed miserably and it’s with an extremely heavy heart that I have to report that director Kimberly Peirce (Boys Don’t Cry) fails as well. Although not as miserably as the others have…

The story of Carrie White and her telekinetic abilities is one that’s been ingrained into the minds of all who’ve read the original novel, there isn’t that much of it I need to recount here as screenwriter Roberto Aguirre-Sacasa hems pretty close to the original script (By Lawrence D. Cohen, who gets script credit here as well). Carrie (Chloe Grace Moretz) is a sad, lonely & misunderstood teen who is constantly harangued by her fellow classmates and kept under lock & key at home by her religious nut of a mother, Margaret (Julianne Moore), who the whole town pretty much avoids. To make amends for participating in a particularly cruel prank played on Carrie early in the film, classmate Sue Snell (Gabriella Wilde) asks her boyfriend Tommy Ross (Ansel Elgort) to escort Carrie to the prom in her place and in doing so, he shows Carrie just about the only kindness that she gets in the entire film. But as in the original, Carrie’s dream evening is ruined by the vengeful Chris Hargensen (Portia Doubleday) and using her newfound powers of telekinesis, Carrie enacts a horrible revenge on Chris and everyone who she feels has wronged her. 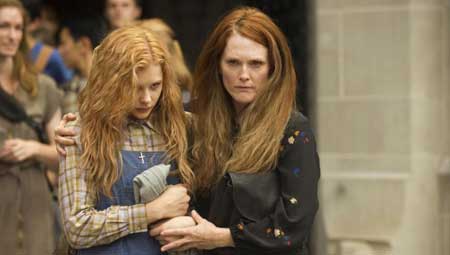 What works in this needless remake is the relationship that Carrie has with her deranged mother, Margaret. There is a genuine love that comes through from Carrie to her mom & vice versa that, while a bit forced at times, feels true. Although the mother/daughter dynamic featured in the original was a bit more scornful than this one is there’s still a lot of repressed anger towards her mom that Carrie slowly releases as she discovers her new abilities and how to control them. And Margaret’s regret over allowing Carrie to live once she was born is something that she has no problem reminding her daughter of. There’s a sort of controlled fury between the two that’s palpable & simmering just under the surface of both their characters that makes their inevitable showdown something I was looking forward to. But….. 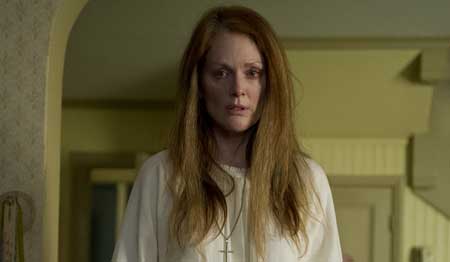 The showdown that I got pales when compared to the original and that’s only part of what doesn’t work in Carrie. Moore is a excellent actress and when I first heard of her being cast I thought it was a good choice but upon watching the finished product I realized that she has nothing on Piper Laurie, who essayed the role of Margaret in the original film. Laurie earned a supporting Oscar nod for her completely unhinged portrayal of Carrie’s mother & she deserved it, She wasn’t just crazy, she was scary! Her eyes showed very little emotion but her body language & the delivery of her lines made Margaret one of the greatest anti villains ever to grace the screen. Moore is content to keep Margaret crazy and she does that well enough but she isn’t SCARY, not in the least. And her piss poor interpretation of a Margaret punishing herself when faced with what she perceives to be her “Failure” at raising Carrie properly had no emotional heft to it whatsoever.

Moretz is one of the finest young actresses on the scene right now but I think she’s miscast here. Firstly she has none of the wide eyed innocence that Sissy Spacek did back in the original film. She does well with what she was directed to do I suppose but there’s no real pathos coming off of her interpretation, no sense of being as downtrodden & lonely as Spacek was. I could feel no pain coming from her portrayal and if nothing else, her inner pain is what makes Carrie so sad a character. I didn’t feel any great need to be sorry for her, not as much as I did for Spacek in the same role anyway. Spacek was nominated for Best Actress Oscar back in 76′ because her performance was so achingly heartfelt & genuine. The performance Moretz gives is a good one but hardly memorable when compared to the one Spacek gave. All the supporting performances are good enough but Doubleday is especially nasty as Carrie’s nemesis, Chris. She does a great job in taking an already unlikable character and making her even more unlikable. There was a genuine distaste in my mouth whenever she came onscreen and her inevitable end (while unremarkable) still felt good to watch. Judy Greer also does some commendable work as gym teacher Ms. Desjardin, who in one of the bigger changes from the original script is spared by Carrie at the end of the film. 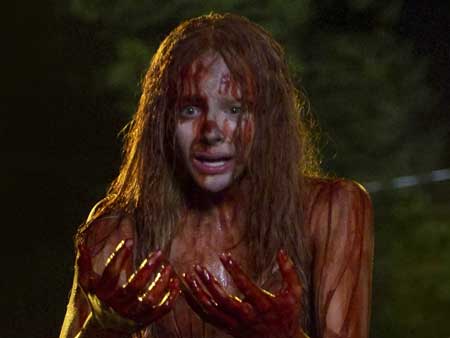 The big prom scene is certainly unafraid to spread around the blood but it feels forced & again, not scary at all. Even the pig’s blood dumped on Carrie’s head looks like it’s just candy apple sweet syrup. In the original film, the blood looked like blood and helped sell that part of the film. Her, it’s just a bucket full of Karo syrup with some red food dye added to it. Pathetic. Moretz decided to wave her arms around as if they were tied to strings and under a puppeteer’s control. She looked like a fake blood encrusted belly dancer for a few minutes there. And while the big scene is handled well, it feels rote & has none of the sheer terror the first one had.

The script tries to update the proceedings by introducing the internet & viral videos to the film but not enough time is spent on exploring the possibilities that they might have brought to the table. Instead the (Good) idea of having a video featuring Carrie being harangued being downloaded to the internet and watched by thousands is touched on for a few minutes in the beginning of the film and then rammed down our throats near the end of it with no mind paid to it in the middle of the film. I think it would’ve been a lot more effective if the effect the video going viral had on Carrie played a bigger part in the film. It certainly wouldn’t have hurt to try as Carrie stays mundane for the first 3/4 of its running time and doesn’t hit any kind of stride until the big prom scene, which is a big problem because it gets boring fairly quickly. The characters are the same but there’s a lifelessness here, a casual shrug of the shoulders that the film makers seem to be making towards the audience. I know I’ve said this before about other remakes in the past (EVIL DEAD…I’m talking to you!) but it happens here as well, Carrie has no heart, no soul. It just sits there looking pretty and teasing us to wait for the big final scene and pulling the rug out from under us once we reach that point. 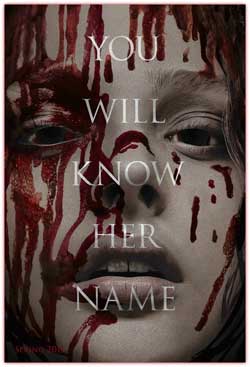 And as to that final scene in the film? Well it’s different from the original but stupid and unsatisfying with no shocking twist to make you jump out of your seat like the original made you do the first time you saw it. In what might be the scariest part of the film, the ending here seems to be directed towards a possible sequel and as unnecessary as this remake is, a sequel would be a complete and utter waste of theater screens worldwide.

Another glaring error is the film’s score. Marco Beltrami’s score here sounds very standard and rushed. In the original film, Pino Donaggio really created a score that highlighted the action on screen. Beltrami’s score is happy just playing in the background, it doesn’t help to highlight some of the feelings of what’s going on at the prom, or in Carrie’s life either. It’s soulless and heartless, strictly by the numbers.

In the end, Carrie is a below average shocker that if not for some excessive bloodshed could’ve gotten away with a PG-13 rating and been right at home on the SYFY channel. Another dumb remake for the unsuspecting among us who haven’t seen the original film and think this is gonna be something special. Well…it ain’t. Some good performances, a few interesting scenes of carnage and stuff flying around aren’t enough to make this film anything more than blah. See it if you must but if you’re familiar with the original film and think you’re gonna get more of the same with this one, then prepare to be sorely disappointed….

Carrie (2013) is now available on blu-ray per Sony Entertainment