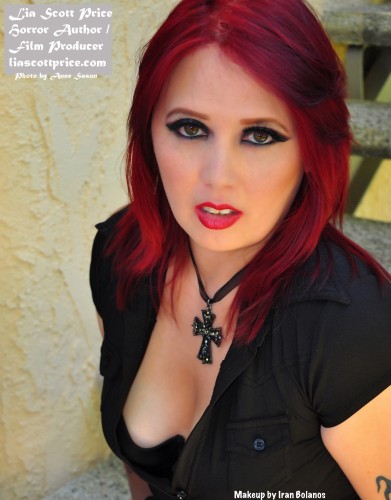 JR: First off, I have to say that I am honored to be interviewing you. I’ve read your work: The Guardian, Revenant and Dominion and to be brutally honest I thought your stories were really amazing, terrifying, disturbing, grotesque and awesome. So now that I’ve gotten that out of the way, onto the interview.

I just wanted to say thank you too, John, for reading my work and for all your support and it is an honor to be interviewed by you and I’d like to also thank horrornews.net for the opportunity to be interviewed!

JR: What made you get into writing and filmmaking?

Therapy. Writing horror was therapeutic for me and was a way to deal with some tough emotional times through fiction, fantasy, imagination. Fear is a big motivator. Writing about vampires in particular was actually more of a psychological experience since I can kind of compare it to my being psychologically drained by many “horrific emotional vampires” I’ve met in years past. So yes, it was a kind of therapy.

I got into filmmaking mainly to publicize the novel and I was curious as to how my characters would play out on film. My trilogy novel actually began as a screenplay. I was writing for an acting class and I used to test out my dialogue from my novels with the actors. My writing process actually starts out with dialogue first, and then I work details and storylines around just a few pieces of dialogue. Seeing the actors perform a few lines inspired me to start turning small chapters and scenes from my novel into film shorts. I wanted to bring my characters to life. I took classes from and volunteered for a local community cable TV station and learned everything from running a camera to lighting and editing, as well as from cinematographers I hired. I decided to form my own production company since I figured it was faster to get my novel on film if I did things on my own. I learned mainly from constantly working hands-on in my own films and learning from other professionals and taking part in every aspect of my films: from working as a writer, boom pole holder, editor, set design, actor, director, cinematographer etc. There are times when I do it all and when I hire other professionals to work with me on a film.

JR: What was the toughest challenge you had to face in pursuing what you wanted to do in life? How was the process for trying to get your work out there?
I really didn’t see anything as being a tough challenge. I always keep a positive mindset. My first rule is “Find a way”, or do it yourself. If one door doesn’t open, make a doorway. I started self-publishing my own book and self-promoting it. I wrote my own press releases. I’m a self-marketer. You really have to make a name for yourself and network and ask a lot of questions and do a lot of research and it does take a lot of work.

I don’t believe in waiting around and hoping for someone to pick me up, whether it’s a publisher or film producer. I would rather run my own company. But even if I do get some interest, I have to give them a reason to take notice. I have to have the “product”. My process of creating is actually very business-like in approach and execution. I’m the type who will wake up one morning and say “I’m gonna start a comic book series. What do I need to do?” , and act on it. That’s the key: acting on the idea. Then my business side kicks in and my mind works like a factory: What’s the schedule, who do I need to hire, where do I find the right people, what materials do I need, what’s my product going to be, etc. It’s not a challenge to me—it’s a process. Then once you have started creating your work, you have to put yourself out there, think like a business, and market your product, and things will start to happen for you. You have to be able to mix the business aspect of things with the creative parts. It’s really about trial and error until you find what works for you. But don’t ever think you’re going to fail before you even get started. If one thing doesn’t work, do another. 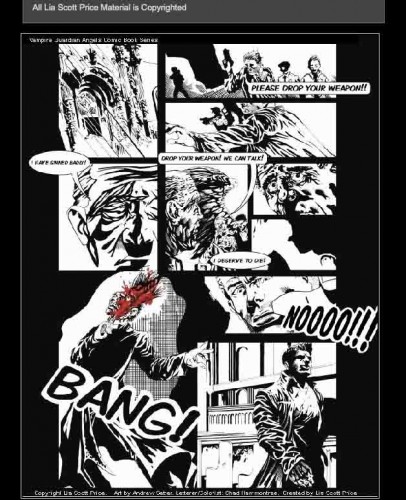 But the most important thing is that I could not have done all this without the support and help of fans, bloggers, good friends (like you, John!), industry colleagues, my comic book artists, actors, crew, and many other creative professionals!

JR: What was your inspiration for your writings?

1. My “What If” game, like “What if” a guardian angel was a serial killer? What if bad things lived under my house? Think of the scariest situation and put yourself in it, and what would you do.
2. I was inspired mainly by questioning popular beliefs. For example, why do we rely on a supposedly higher supernatural power that we can’t see to save us, and what if it really was evil? And then the “What if” game goes one from there.

JR: How was it working with a site such as Createspace? How is it different from any of the other self publishing websites?

At the risk of sounding like an endorsement, they have been really great and I have had no complaints. They have very helpful and responsive customer service, the publishing process is easy, and that is what I look for. I love the control that an online publisher gives me as a creator because I can, at any time, edit, add, update a product, and promote it online. Years ago before print-on-demand, I was putting my first draft of my novel together at a local printer’s with no guidance or assistance. Now, online print-on-demand publishers are a godsend. There are just so many choices for self-publishers nowadays, and createspace has so far been the best fit for me. And the quality is amazing. It’s a great resource for authors and filmmakers and I highly recommend them!

JR: I know that you’ve made a series of short films that are related to your stories and recently you announced you were going to be acting in a short film, again, related to your books where you will be acting alongside one of the book’s antagonists, Gabriel. How do you get into the mindset of the character you are going to be portraying? Will there be anything different in the short film that we haven’t read in your books?

The films are always very different in that they have to be tweaked a little in terms of storyline and dialogue. For instance, in the first few chapters there is an exploding helicopter and of course I don’t at the moment have the budget for that, so I change the story into something more doable. But the whole point of the films is to feature the vampire characters and to bring out the main point of the book. I would like to someday create a whole vampire webisode series that is completely faithful to the novel and that’s one of my future goals of course.

To get into the mindset of a character I use the same “What if” method. What if my character reacted this way instead of the expected way? What if she felt this way? I try different things to see what works.

For my current vampire film short “PRA/EY” that starts shooting May 12, I do have a wonderful director, Ray Rodriguez, so I don’t have to direct myself, which can be very hard when I’m trying to concentrate on acting.

JR: Recently from our conversations and the news you’ve announced on your Facebook account, issue one of your comic series has been finished and is going through the layout stages. How was your experience in working with the artists who were responsible for bringing your written work to life through illustrations?

The first issue called “The Guardian” is the first book in my Vampire Guardian Angels™ Comic Book Series (based on my Vampire Trilogy Novel The Guardian, Revenant, and Dominon.) The comic book artist is Andrew Setter and the letterer/colorist/graphic artist is Chad Hammontree. Both are currently college students going for illustration degrees and they are talented, responsible, reliable, dedicated, fun to work with, and incredibly professional people and I am very happy and impressed with their work. They have claimed that I have now turned them into vampires since they sleep during the day and work at night on the comic book ! I have to say that, this being my first comic book series, it has been a smooth and exciting experience. I tend to worry a lot as all creators do, but they met deadlines and kept me up to date on the project and really delivered amazing art, exactly what I wanted. I can’t thank my artists enough. And we have two more issues to go, so everyone will be hearing a lot more about these two amazing artists.

JR: What can we expect from the first issue? Will it be a comic book adaptation or an original story? Would you recommend this to local churches?

The first issue thankfully is faithful to the original book. I am absolutely thrilled with the artwork and graphics. And….I think it would be banned from local churches, lol! Since horror is a genre that pushes the envelope in a lot of aspects, I’d say I’ve been messing with people’s beliefs in terms of what pop culture considers “saviors”, mainly Guardian Angels. My work questions what they are, and presents an alternate view on what they could be.

JR: For those who are aspiring writers and any type of artist what advice would you give them if they were to follow in your footsteps?

Learn to balance both the creative and the business aspects. Learn to wear many hats whether you are a writer, filmmaker, comic book artist etc. Many people often just want to concentrate on the “fun” and creative part, but ignore the fact that in order to move forward, you have to learn to be your own marketer, publicist, shameless self promoter, etc. Don’t be afraid of the legwork. Don’t rely on others to make your dream a reality. You have to make it happen. But what is really important to me is to find positive, reliable people to work with. As a rule, there is no negativity allowed on my set, my projects, and generally my life. Act and stay professional, it’s kind of like my guide. May sound extreme to some people, but it works. Show gratitude too and treat people right, from actors to crew to people who work with you.

JR: That just about wraps up our interview, thank you for being apart of this and for your time. I know that you’re a very busy person and working hard to get your work out there. Can you tell us when the first issue will be out and when shooting begins on your new short movie? Can you tell us where we can find The Guardian, Revenant and Dominion? Again thank you, Lia for taking the time to do this interview. It was a real pleasure.

It has been an honor and a pleasure to be interviewed by you, John. Thank you so much to you and to horrornews.net! You know I am a big supporter of independent horror and I thank you both for promoting horror authors, filmmakers, and artists!

The first issue of my Vampire Guardian Angels™ Comic Book Series should be out by June 2012. Readers can also visit my web site or my facebook page for updates.

My original Vampire Trilogy Novel “The Guardian, Revenant, and Dominion” can be found at my web site, www.liascottprice.com