“As a boy a young Bruce Wayne watched in horror as his millionaire parents were slain in front of his eyes, a trauma which led him to become obsessed with revenge but his chance is cruelly taken away from him by fate. After disappearing to the East where he seeks counsel with the dangerous but honorable ninja cult leader known as Ra’s Al-Ghul, he returns to his now decaying Gotham City overrun by organized crime and dangerous individuals manipulating the system whilst the company he inherited is slowly being pulled out from under him. The discovery of a cave under his mansion, and a prototype armored suit leads him to take on a new persona, one which will strike fear into the hearts of men who do wrong – he becomes, Batman. In the new guise, and with the help of rising cop Jim Gordon, Batman sets out to take down the various nefarious schemes in motion by individuals such as mafia don Falcone, the twisted doctor/drug dealer Jonathan ‘The Scarecrow’ Crane, and a mysterious third party that is quite familiar with Wayne and waiting to strike when the time is right.” (courtesy IMDB)

DC Comics’ crime-fighting masked millionaire Bruce Wayne has been adapted, re-invented and re-imagined in a variety of media, with diverse takes on the persona introduced by Bob Kane in 1939. Director Tim Burton gave the hero a brooding Gothic twist in Batman (1989), kicking off a run of four Warner Brothers pictures produced over the following eight years. The series faltered after the dark knight, clad in a batsuit infamously equipped with rubber nipples, tangled with a trio of campy villains in Joel Schumaker‘s Batman Forever (1995) and Batman And Robin (1997). In 2003 director Darren Aronofsky was attached to make a Batman movie based on the graphic novel Batman Year One and have the author Frank Miller write the screenplay – there was even a first draft screenplay with story boards prepared. Warner Brothers decided not to go ahead with the production because of the screenplay, which strayed a considerable amount from the source material: Alfred was turned into an African-American mechanic named Big Al; the batmobile looked like a souped-up Lincoln Towncar; Bruce Wayne was homeless(!) and many other problems. 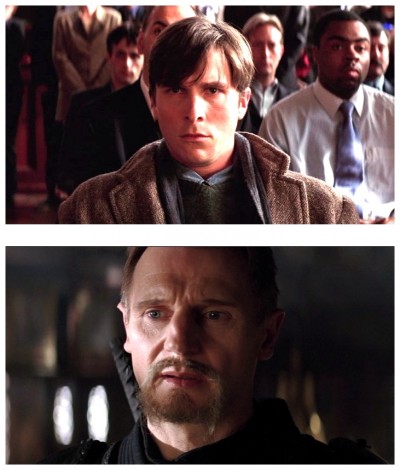 The franchise was revitalised with Batman Begins (2005), an exploration of the genesis of the Wayne mythos, presented in a stripped down utilitarian manner as proposed by director Christopher Nolan. The new take on Batman’s comic book lore was evident in the earliest discussions with producers, writers and special effects providers. It was made very clear that this Batman was a guy who built and acquired his gadgets as functional items. There are no ‘magic powers’, no alien forces from another planet. Everything is grounded in reality. Nolan extends the real-world sensibility of his Gotham City to every element of the film, designing highly ambitious shots and stunts, many captured in-camera without relying too heavily on CGI, which is quite refreshing.

The screenplay by Nolan and David Goyer follows Batman (Christian Bale) from his traumatic childhood, witnessing his parents’ murder, through martial arts training in the Far East, to his return home in Gotham City where psychiatrist Jonathan Crane (Cillian Murphy) is facilitating a crime-spree for a mysterious unseen master villain. As Batman, Wayne combats Crane’s nefarious plot, counseled by his loyal butler Alfred (Michael Caine) and Wayne Industries science advisor Lucius Fox (Morgan Freeman) who develops Batman’s gadgetry. Bruce Wayne’s transformation into Batman starts with a prologue that interweaves Wayne’s memories of childhood, with his experiences while training at an obscure mountaintop retreat under the guidance of enigmatic Henri Ducard (Liam Neeson). After a fight between Wayne and Ducard’s followers ignites a gunpowder cache, the mountaintop sanctuary is obliterated.

The story moves to Gotham City, where Wayne adopts his crime-fighting persona, using rugged military body armour developed by Wayne Industries as his batsuit. A problem with previous batsuits was that they were too heavy and not terribly flexible – any time Batman had to turn his head, he had to make a very stiff-backed motion, rotating his shoulders. Christian Bale’s costume is more like a neoprene wetsuit, which allows for greater range of motion. His cape was made with a technique called ‘electrostatic flocking’ developed by the British Ministry of Defense and normally used to decrease the night-vision visibility of objects. Nylon parachute fabric was brushed with glue and covered with fine hair-like material. An electrostatic current was then passed under the material, creating a dark sheen while maintaining the billowing appearance. Like the batsuit, the batmobile – Bruce Wayne’s most visible hardware item – is given a new look to distinguish it from previous interpretations. Essentially, previous batmobiles have been rolling props, beautifully made props, but they weren’t terribly practical nor could they be called ‘performance vehicles’. 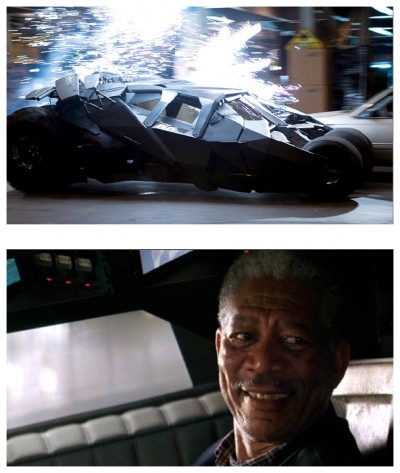 In Batman Begins, the batmobile is built to be a performance car, racing through city streets, doing leaps then landing, swerving through traffic and coming out relatively unscathed. It’s a little like a cross between a Lamborghini Countach, a Special Forces attack vehicle and a formula one racing car. It uses some existing interior components, but was apparently designed and built from the ground up. Mechanical engineer Andy Smith figured out the chassis and engine configuration, gearbox and suspension. The front suspension is a little unusual – there is no front axle, and there are two sub-axles coming off each wing, which gives the car a very unique look. Nine feet wide and sixteen feet long, has a top speed of 106 miles per hour and can accelerate from 0 to 60 miles per hour in six seconds, with a 5.7 litre V8 Chevy engine. It runs on unleaded petrol and can do about seven miles per gallon (an American tradition!). The batmobile makes its first public appearance on the streets of Gotham in a high-speed night-time chase filmed along a disused Chicago freeway and Lower Wacker Drive, made famous in the climactic car chase of The Blues Brothers (1980). 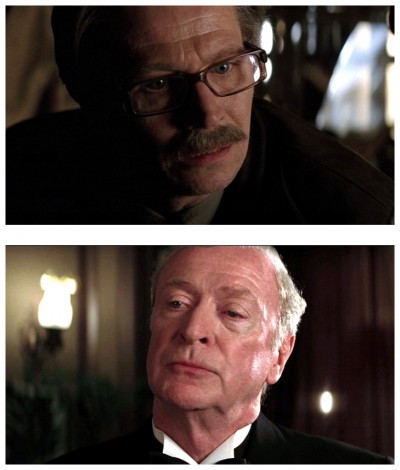 Escaping Gotham City, the batmobile returns to its safe haven in a cave beneath Wayne Manor, leaping a gorge through a waterfall. These exteriors are filmed with the full-scale batmobile racing through the grounds around Hatfield House in Hertfordshire, which also happens to be the very same property Tim Burton used for Wayne Manor in 1989. The emphasis on physics and real-world references is obvious in all aspects of the production, from character and story, to visual effects and colour – a great deal of the location photography was shot with only available light. There’s a little augmentation here and there, admittedly, but the mixture of colours is radically different from what might be expected in a comic book movie. The film is also enhanced by a significantly European cast, many performing American accents for their roles: Christian Bale is Welsh; Cillian Murphy is Irish; Gary Oldman (as Jim Gordon), Tom Wilkinson (as Carmine Falcone) and Linus Roache (as Thomas Wayne) are English; and Rutger Hauer (as CEO Earle) is Dutch.

Director Nolan creates a world that audiences can relate to, because Batman is, after all, the most understandable of superheroes. He’s not an infinitely gifted entity – he’s only human. As actor Christian Bale told Empire Magazine (June 2005): “Well, with Batman, I think his weak spots are his strong points as well. I mean, the reason we know anything about him is because he has managed to maintain the clarity of mind that he had at the moment of his parents’ death to make him continue trying to right that throughout his life. But it also means that he’s sacrificed much of his own personal life. I think the other weak point is that he actually enjoys what he does so, when he’s beating the crap out of somebody and breaking bones, he has to constantly remind himself not to take it too far and become like the criminal sadists that he despises.” And it’s with that thought in mind I’ll bid you a good night and look forward to your company next week when I have the opportunity to put goose-bumps on your goose-bumps with more ambient atmosphere so thick and chumpy you could carve it with a chainsaw, in yet another pants-filling fright-night for…Horror News! Toodles!