Film Review: KISS Meets the Phantom of the Park (1978) 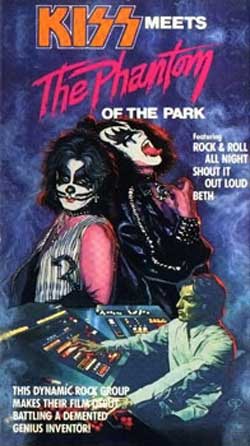 The tale of rock band KISS and their efforts to thwart a diabolical plan by mad scientist Abner Devereaux. Devereaux has found a way to clone humans into robots in his laboratory at an amusement park. It just so happens that he plans to uses the KISS concert as a platform to unleash his plan on the world. KISS must use their special powers to stop him.

By the time that this movie rolled onto to screen, Kiss was already a phenomena of critical-mass selling record sales the world over. The 4 rock and rollers seemed a perfect fit for a horror / fantasy film using them as the central characters. The year was 1978, and I had worn my Kiss records down to where they skipped a little “too” frequent. News of a KISS film was like a dream come true seeing that there wasn’t much in those days for “super hero live action” on TV (let alone starring one of the world’s most followed rock acts). I mean, we had Saturday morning heroes like “Shazam” and Isis” which were hardly inspiring as quality TV. Yep, a TV movie had been in the works and even promoted itself before hand with an entire magazine dedicated to it….life “seemed” about to get better. 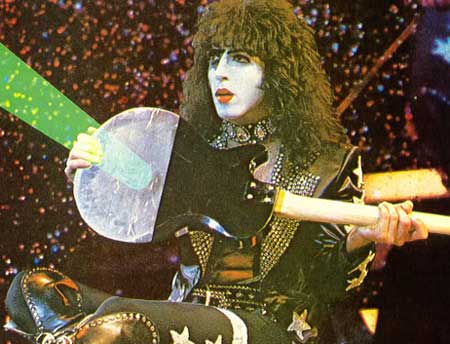 The movie played and yet somehow even in the glory of it being KISS, fans felt a bit let down. Was it possible that the world’s greatest rock band turned out to be “really” bad actors? Was it possible that the TV show was a bit too corny and awkward? Yes our heroes had created a movie that was in some sense considered “crap”. I do blame the era however, which didn’t benefit from the cool FX we have today. While the film did have them doing some live concert scenes, the movie itself was easily more comparable to those lousy Saturday after-noon teen shows. The script was convoluted, the band was a bit too silly and the creatures they battled seemed like they just came off the meet-and-greets from Universal studios. Those corny painful-to-watch-fight-scenes didn’t help much either…as even Bonanza could do a better job.

So what is this NBC mess about anyways? For starters, the film is shot at Magic Mountain where a mad scientist Abner Devereaux, is experimenting with a variety of cybernetic creatures. When his budget is pulled in support of the KISS concert, he decides to sabotage things by creating “his own” KISS robots. One of our key players Sam (Terry Lester) is also turned into a cyborg per way of a mind control device. Devereaux uses his research to create a small army that consists of various movie monster robots, and assorted attack borgs. These creations become a device for vengeance by Devereaux against park leader Calvin Richards (Carmine Caridi). As part of his plan he uses his robots to discredit KISS and then replace them in the live concert with his own versions. All in the name of revenge. 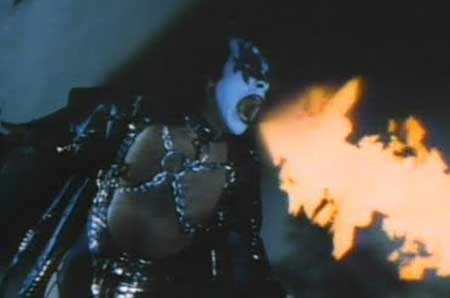 KISS being no wimps themselves, manage to escape and battle their electronic Doppelganger (kind of funny to watch). They also proceed to expose Abner Devereaux for his deceit and treachery. KISS ends the film with a live concert after they defeat the fake KISS (who performs a angry variation of one of their songs “Rip and Destroy”). It’s all in good fun and some wacky screen time.

The characters as announced in the film are: Peter Criss as “Catman”, Ace Frehley” as Space Ace”, Gene Simmons and “Demon” and Paul Stanley as “Starchild” 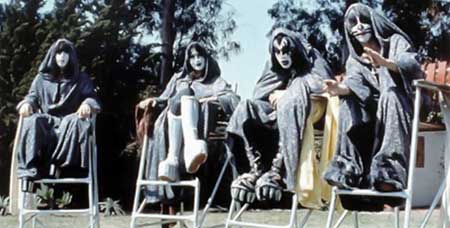 The film due to its obvious KISS connection and era-centric look-and-feel, has gone onto a cult film status. It was missing from distribution for many years but still traded among bootleggers. It finally came to VHS and then years later to DVD. This NBC-TV-movie now shares a different place among fans who quickly understood that despite it being a poor product ….well… it was still cool to see KISS doing a movie. 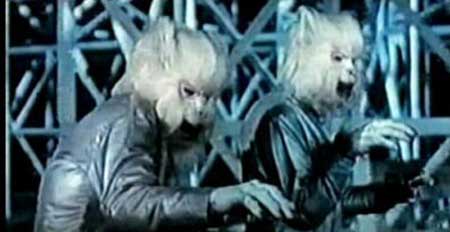 The film was mentioned as “taking the band into the next level” by presenting them in a film based on their characters. The production itself was met with some difficulty by band members who didn’t quite fit in with the demands of filming a movie. Voices were overdubbed and lines were written with little substance to them. The production was produced by Hanna-Barbera, who were responsible for many of the Saturday after noon TV shows (hence the film style). 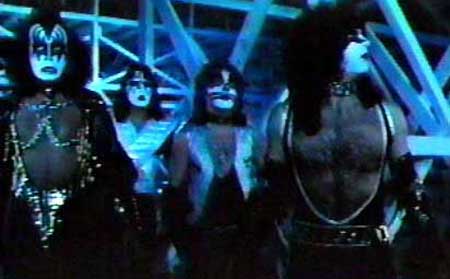 Mixed opinions on this one would state the obvious….”KISS Meets the Phantom of the Park” is campy, corny, and retrograde low-production looking. However, you wont see Kiss (the band) in any movies playing characters now or in the future, so it does have a special place within the genre. If you want to see the band doing cool characters, you’d be better off with the KISS comic books, however this film leaves alot to be desired. Time has prompted the film to receive a cult status due to its off-the-beaten path nature. If you want to see KISS in some bad acting, then this is the one to watch. I happened to purchase the film just for retrospective memorabilia purposes. In fact its so bad, that its good!