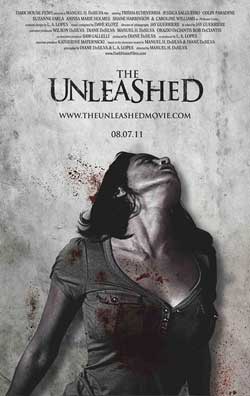 When Madison Kennard (Trisha Echeverria) returns to her home town after an eight year hiatus, a certain sense of harrowing anxiety is in the air. Estranged from her family, her mother’s passing prompts the reluctant visit in order to sell the house and get her affairs in order. Memories of an unsettling upbringing are overwhelming making the appearance a challenge to cope. Lindsay, (Jessica Salgueiro) her childhood friend soon arrives on the scene offering support and opportunity to catch up. Together they decide to have a get together with the old gang and tensions seemingly begin to lift gradually. While engaged in a few c**ktails to loosen up, that one overbearing, nosey individual that seems synonimous with such gatherings makes his way into the attic where a Ouija board is found.

Curiosity consumes the group as Lindsay leads the séance of forbidden trying to channel unknown entities into the atmosphere. Unexplainable events begin to arise, one after another until Lindsay is ultimately possessed. Madison meets a paranormal author in the town’s book store Andrew Porter (Colin Paradine). Together they unite to find a way to exorcise the evil lurking within the Kennard home and save their friend from an eternity of hellfire, brimstone and demonic possession.

DaSilva’s second cinematic endeavor is innovative, original and welcome gateway unto pulse hammering terror. Where so many other releases of contemporary nature are fixated on the remake, yet another zombie tale or an overly saturated vampire angle The Unleashed is a fresh, intriguing brainchild of an ancient practice and ritual. 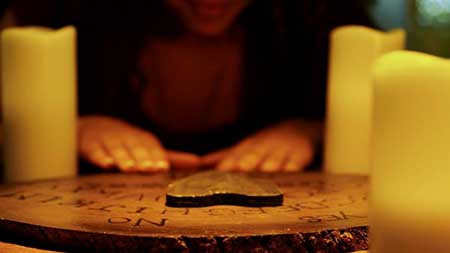 Our tale begins in the 19th century where a psychic hag is visited by an aristocratic type figure searching for answers into the unknown. The blind medium utilizes her one of a kind ‘talking board’ warning her visitor of inevitable doom. Unearthly forces make their presence known. As the man departs in haste, he deciphers a code written from the board to leave immediately. His curious nature eclipses sound judgment as he steals the hand crafted talking board, a foreshadow of things to come.

The cinematography is crisp, visually esthetic, focusing on shadow and hues to highlight varying degrees of tension. Our audience is carried upon a journey of rising suspense delivered with subtle finesse. The influences of John Carpenter are evident as the viewer’s imagination is enticed depicting raw fear in what we don’t see or anticipate lurking around the corner. 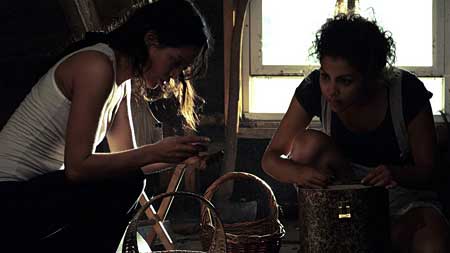 Special effects or computer generation are utilized with such precision the scenes are embedded on a subconscious level, engaging and captivating us for more. Shadows slide in and out of the peripheral vision, luring us deeper and deeper unto the tale before us. The use of such subtleties are immensely effective exploiting our deepest darkest sanctum in imagination. DaSilva has a firm grasp on these concepts and deploys each with gifted execution.

Influences such as The Ring or The Grudge are apparent as we witness skittish, eerie like movements from the unholy apparitions. It tweaks the base of your spine, drawing chills to the back of your neck. These techniques are implemented with such flawless results I’m hard pressed to imagine any fan of cinematic horror able to watch in still, oblivious fashion. One particular scene stands out where Lindsay is beginning to sense something is horribly awry. Her demonic symptoms manifest in rapid fluency unto the audience as she rocks back and forth before a reflective mirror, desperately seeking somber release. Suddenly her reflection ceases all movement while her true form continues to rock back and forth; Just excellent, bone chilling artistry. 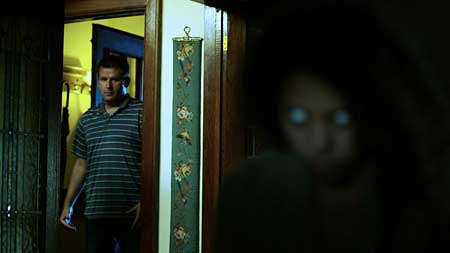 The sound effects are embedded with caution, and hold much relevance to the stings as DaSilva affectionately calls them. Stings of course are the end result of a build-up in a scene the one that makes your date howl in shock, or spilling your popcorn haphazardly unto the floor beneath you. A lot of directors, especially inexperienced go overboard with the use of sound, force feeding our senses into a frenzy with aspirations of picking up the pieces later. In the Unleashed is clear that the director understands too much of a good thing has negative results as our crash, bangs and booms are executed with perfect timing.

The musical score is of a classical nature which I think we’d gotten too far removed from in recent times. True enough synthesizers, grunge like bass and guitar have a safe home in cinematic horror story telling. Yet I find the use of classical music taunts a very primal place of our subconscious, elevating varying moods in rapid succession. One scene that stands out with such lucid, vivid depiction is Andrew playing the piano to unwind after an unnerving day. He’s oblivious to the entity sitting directly next to him, she plays the violin in harmony to his keys. She stops and stares at him with black, soulless eyes, frozen in time and existence for eternity and only begins to play once again when he resumes. Its damned creepy but incredibly beautiful all at the same time. I’ve never witnessed anything quite like it. 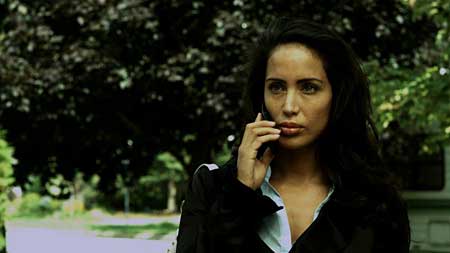 Make up and costume design contribute to a ghastly visual experience. As the entities are painted a very prominent white, it highlights their deep lacerations and contusions that much further. There is one unsettling gratuitous boob scene where I’m unclear if it holds any direct relevance or not but I highly doubt any of our testosterone fuelled demographic would complain. It’s admirable little blood or gore is used in The Unleashed. DaSilva is not a fan of overindulgence and in some cases it can be a distraction from the actual plot. I tend to agree as clearly a very memorable, engaging tale can be told without.

Five out of five tombstones. 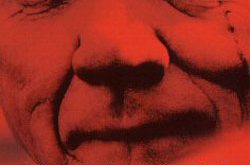