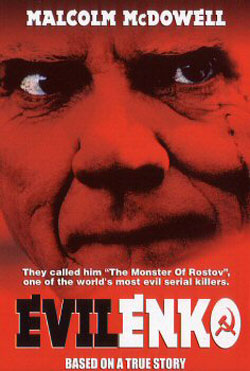 Police detective Vadim Lesiev (Marton Csokas) tracks the killer known as “the Monster of Rostov” in David Grieco’s film based on true events. The story follows Lesiev as he investigates the activities of Russian literature professor Andrei Chikatilo (Malcolm McDowell), a vicious serial killer who covers his bloody crimes by eating his victims. But to catch the elusive psychopath, Lesiev must get inside the madman’s mind. Frances Barber co-stars.

He was known as “The butcher of Rostov,” The Rostov Ripper” or “The red Ripper.” His heinous crimes ranged from sexual assault, to pedophilia, to cannibalism and child murder. His mother had told him that his brother was kidnapped and eaten by their neighbors. This rumor was never confirmed true. He was later convicted of the murders of fifty two women and children. His name has recently been added to the metal band, Slayer’s halls of the infamous along with Ed Gein and Jeffrey Dahmer on their new album, World painted blood. I won’t call him a man, but he was one sick son of a f*ck. His name is Andrei Chikatilo. There have been two films about him so far. Citizen X and this one…. Evilenko.

When dealing in the subject matter of such a sick bastard, one must not hold back and the director of this film certainly did not. This is the most disturbing roll I have seen Malcolm McDowell (A Clockwork Orange, Tales from the Crypt and Rob Zombie’s Halloween and H2) portray. Yes, it’s true, your humble narrator, Alex, from A Clockwork Orange was twisted, but this character makes him seem incredibly nice, like someone you would let babysit your children. The most disturbing part of course, is that Andrei is not a fictional character.

From the very beginning of the film, the viewer can see what his mind is cooking, and it’s pretty vile. His perversion begins to vomit forth within the first few minutes and is graphically depicted on film. Other movies have taken a beating for being too taboo. This one must have been over looked. Then again, the truth hurts. This film is based on nothing but the facts.

Malcolm said that he did not want to steal Andrei’s complete personality, but portray him the way he was. He wanted the character to be hated by the viewer. He did a fine job. His character and the film itself does not hold back one bit, except for graphically showing each murder as it happened. Even the dialog paints a macabre picture of what has happened, on or off screen.

Not only the murders, but the sexual assault of an eleven year old girl is placed in front of the viewer with almost the blackest of humor. If you’re into horror, you almost want to laugh as the horrible act is unfolding because of the build up and dialog… until the actual execution. Along with his sickening acts of sexual mutilation, cannibalism and murder, he is determined to make it well known that he is a communist. Once you get to know the character that Malcolm is portraying, the mere thought (or even worse, sight) of him holding a little girl’s hand is cringing. From the very beginning, his interaction with children is dominant and obvious. He is a school teacher for the first few moments of the film. Right away, you can sense his arousal as a student unintentionally shows a little bit of skin. The worst has yet to come.

The gore score is not too high, but all the same effective. This is not an exploitation film for shock’s sake, but is still quite disturbing. Even the scene menu is the names of his victims. This adds a shocking touch to the overall packaging of the feature. The acting is well done. Even though this will be hard for most unseasoned viewers to digest, it is worth the watch. It’s mostly made for the true crime buff, such as Tom Araya (of the almighty Slayer) or myself. You should know what your getting yourself into before viewing. Then again, it isn’t the most vile film I’ve ever seen, but it’s vile with a semi- subtle approach. Malcolm also portrays a slight sense of passion (I would not call it sympathy) in some cases, making the character a bit more rounded than I’m guessing he actually was.

The soundtrack is also haunting in its own way, adding to the atmosphere of the package. If I had to complain about one aspect, it’s seeing Malcolm completely naked and balled up on the floor with another naked dude standing over him. That part of the film, I didn’t quite get. I have read one other review that says this is not one of Malcolm’s best performances. Maybe not one of the best films(since he has been in one of the biggest cult classics of the century), but I disagree with the performance. I thought he did an awesome job in this, just as he did as Alex in A Clockwork Orange.

The DVD is a double disc with the feature on the first and the second has interviews with the cast and director and a documentary on Andrei. There is also a trailer for the feature and bonus trailers as well. If you can handle seeing and hearing tales of children from age seven to eighteen being sodomized with tree branches, mutilated and eaten, it’s worth the watch. Although I do not condone such acts of dark nature, I do recommend this film to any Malcolm McDowell fan or true crime buff. It is absolutely worth the dark ride. On that note, I give this film, Evilinko, FOUR HORNS UP.