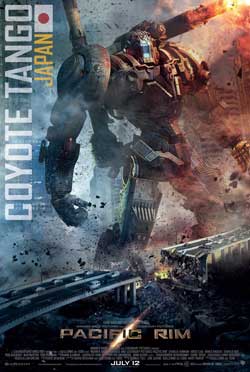 As a war between humankind and monstrous sea creatures wages on, a former pilot and a trainee are paired up to drive a seemingly obsolete special weapon in a desperate effort to save the world from the apocalypse.

I cannot begin to describe the excitement I felt as this film got closer to it’s release date. As a certified (Some would say “Certifiable”) Ultraman/Gigantor geek of the highest order there is nothing that can excite me more than a movie featuring giant robots doing hand to hand battle with giant monsters! So when I entered the theater a few scant hours ago and sat myself down to witness what I knew was going to be the greatest film ever made I was all aflutter with anticipation. But now that it’s all over & I had some time to ruminate over it for a spell I think it’s safe for me to say that while I really liked Pacific Rim, it just felt like there was something missing. 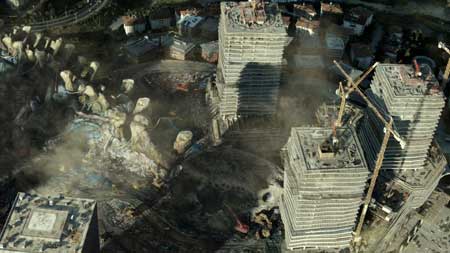 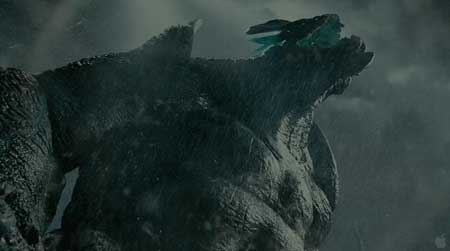 The plot? Come on people, you know what it’s all about! In the not too distant future giant creatures known as Kaiju emerge from a rift at the bottom of the Pacific Ocean and proceed to wipe out millions of people and the cities they live in. Eventually, mankind creates a new kind of weapon to battle the Kaiju, giant robots known as Jaegers (German for “Hunters”). These robots were initially piloted by one individual but the current crop of robots are operated by a carefully selected pair of (For lack of a better term) “Robojox”. This is because it was discovered that one brain couldn’t really get a complete grasp of controlling it’s mind and the brain of a giant robot at the same time. With two pilots using one side of their brains (& connecting their minds at the same time, called a “Neural Handshake” in the film) each of them controls one side of their Jaeger.

After some initial success the Jaeger program begins to falter as the Kaiju become bigger & seemingly more familiar with the fighting techniques the Jaegers use. The Kaiju are measured in size much like hurricanes are measured, they range in categories from 1 to the dreaded category 5 which would represent the largest & most dangerous Kaiju ever seen. The program is financially scuttled by Earth’s governments but still operates, in a much smaller capacity, despite the lack of funding. There are only four Jaegers remaining though and with names like , Cherno Alpha, Crimson Typhoon & Gipsy Danger you can see where director Guillermo Del Toro got his inspiration for all of this from. Heavily (& I mean HEAVILY) influenced by Japanese Manga, Godzilla, Transformers, Voltron, Ultraman & a slew of other Asian creations, Pacific Rim unabashedly wears it’s heart on it’s sleeve and doesn’t have any compunctions on letting you know that straight away. Humanity’s final plan is to detonate an explosive device near the opening of the rift in order to seal it up forever and keeping any more Kaiju from wreaking havok but that’s actually a lot harder than it sounds and eventually it’s discovered that it can’t be done, at least not in the manner that was initially planned. 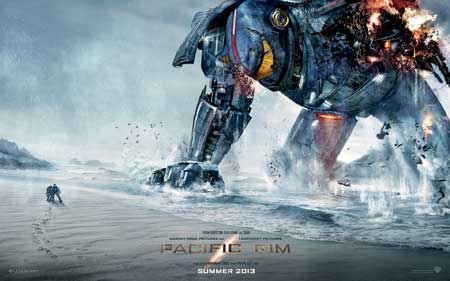 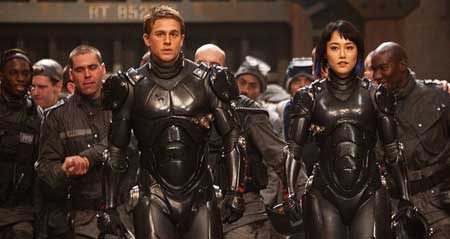 With character names like Stacker Pentecost (Idris Elba), Mako Mori (Rinko Kukuchi) & Hannibal Chau (Ron Perelman) you can see that Del Toro (& co-screenwriter Travis Beacham) have been studying their Manga comics intensely & all of the featured actors succeed in getting their points across with screen chewing aplomb. Elba in particular has a true air of menace about him and he’s one of the good guys! Charlie Hunnam is the star of the film though, he plays a former Jaeger pilot (A Jaegermeister perhaps?) named Raleigh Becket who lost his co-pilot/brother in a battle with a Kaiju in the beginning of the film & has become a laborer in the aftermath of that tragedy. He is recruited by Pentecost five years after the incident to return to battle in the Jaeger he fought his greatest battles with, Gipsy Danger. But a new co-pilot must be found to fight alongside him and that’s where Mako comes in but she has some unwanted baggage weighing her down as well…

There’s an attempt to develop some sort of relationships between all of the characters here but the bottom line is that this isn’t a movie about people, it’s all about the big robots and the big monsters they’re fighting with. Del Toro & Beacham try to give each major character a bit of personality but they shoehorn so many cliches that you’ll feel like you’ve seen it all before. That being said, there is a really good but short performance by a young actress named Mana Ashida who plays young Mako in a flashback scene and the little girl just nails all of the fear & dread that you’d imagine a child would be experiencing when facing a giant monster, she’s just outstanding & I wish I could’ve seen more of her. 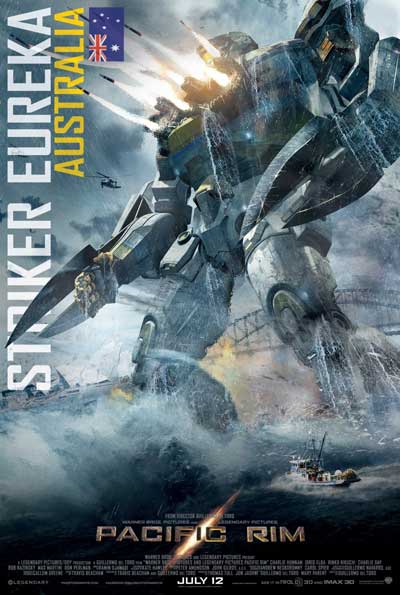 Nearly all of the mind meltingly brilliant fight scenes take place in water at night and while they’re still the most incredible looking scenes of this magnitude ever produced for a film I still wish Del Toro included a few fight scenes that take place during daylight hours and I wonder why this wasn’t the case. There are a few seconds of daytime destruction but far too few for me, I understand that the Kaiju all emerge from under the ocean but did that mean that ALL of the fight scenes had to take place in the evening? The darkness made making out who was who a bit difficult when there was more than 2 combatants onscreen at the same time. Additionally, the cast of characters is multi-national & come from different countries which means different accents. We get Russian, Austrailian, Asian & British accents here and when they’re in danger (Which is often) they recite their dialog so rapidly that it was almost impossible to make out what a lot of them were saying. The near constant habit of yelling from nearly everyone didn’t help any either, just because they’re reciting their lines louder didn’t make them any easier to decipher.

Visually the film is an absolute marvel that must be seen in IMAX/3D format to be fully appreciated. It’s size & scope relegate every other film of similar ilk to the waste bin, it’s quite literally the biggest film I’ve ever seen. The action (Which starts pretty much from the beginning & rarely lets up) sets a new standard for action films & the amazing real-ness of the Jaegers/Kaiju’s will make you believe that these things actually exist. Add to that some pretty hilarious homages to all things geek (Listen to the voice of the computer for instance…) and you’ll believe that you died & have ascended to geek heaven. Ramin Djawadi’s incredible score also helps to give the film a sense of grandeur that it richly deserves, there are some great nods to Akira Ifukube’s “Godzilla” theme spread throughout it’s majestic sound that gave me goosebumps! 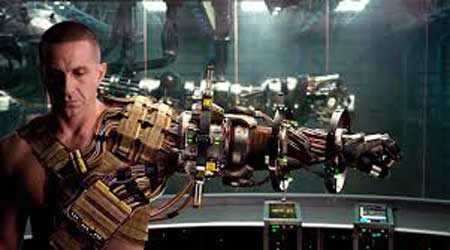 But for all that’s great about Pacific Rim I just can’t help but feel that something was missing when it was all over. Maybe it was the lack of any real emotional heft that’s usually a feature of Del Toro movies, maybe the near constant kinetic movement on screen wore me down after a few hours but something is missing here. I just can’t say what. And it’s killing me since I really enjoyed Pacific Rim a great deal. I just know that I’m gonna be raked over the coals during next week’s Official Horrornews.Net podcast (You guys DO listen every week don’t you?) but I can’t help but feel the way I feel.

But I did enjoy Pacific Rim immensely & if nothing else it gives the producers of next year’s “Godzilla” reboot something to shoot for. It’s not the best movie of the year but it’s still hella incredible! If I find out any of you decided to go see “Grown Up’s 2” over this (and I will find out…) then I am gonna be so upset with you guys…

And you really don’t wanna make me upset, do you?