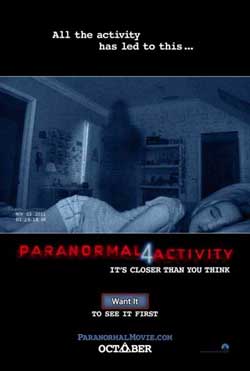 It has been five years since the disappearance of Katie and Hunter, and a suburban family witness strange events in their neighborhood when a woman and a mysterious child move in.

It’s hard to believe it’s been 5 years since the first “Paranormal Activity” film graced movie screens nationwide. I remember seeing it on opening day & thinking that it wouldn’t be around too long, especially since there were only 8 people in the theater total. Little did I know that it would end up becoming a box office juggernaut that warranted 2 similarly successful sequels that were insanely popular despite being nearly identical visually & thematically. 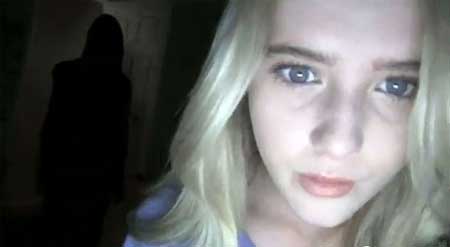 Did I say two? With today’s release of “Paranormal Activity 4” that number has been upped by one. Is this one much different than the previous three? Well, it takes place inbetween the second and third entries which might make it a mite confusing for those of you who haven’t seen any of the films besides the first one. but it’s not a deal breaker either way, the filmmakers know not to alienate the few of us who know nothing of their cash cow. The one mainstay in all four films so far is actress Katie Featherston as Katie (Easier to keep track of her that way I suppose), who spends the majority of this film walking around in a trance…actually she does a lot of this in each “PA” movie.

But in “PA 4” we get a new family that isn’t related to Katie in any way and with that the hope of a new direction for the series. Sadly there isn’t any real reason to keep hope alive as katie makes her presence felt in this film as well but she doesn’t arrive until the midway point (She does appear in the first minute of the film in a bit of video footage) and her appearance while expected, is still a bit of a surprise. The family we meet here aren’t given last names but the focus is on 15 yr. old Kathryn Newton as Alex, who spends the lion’s share of the film on her laptop talking to her good friend Ben (Matt Shively). The two of them aren’t exactly an item just yet but the attraction is evident and the young couple are really well cast as the protagonists. 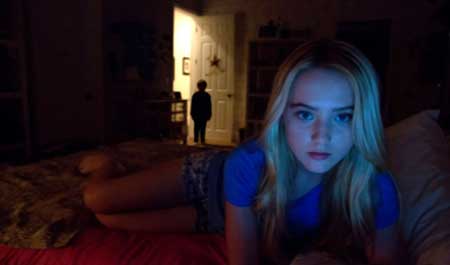 It seems that there has been an accident of some sort across the street from Alex’ home & her mom (Alexondra Lee) volunteers to watch over her neighbor’s young son, Robbie (Supremely creepy Brady Allen) as she’s in the hospital recuperating. Seeing as he’d be a good playmate for her stepson Wyatt (Aiden Lovecamp) she doesn’t hesitate in taking the young boy in much to the surprise of Alex, who’s seen Robbie standing on the sidelines at her stepbrother’s soccer games. Robbie arrives with a few stuffed animals & a special fork that he claims belongs to a “Friend”. Alex & Ben think something is wrong with Robbie almost immediately, he’s stiff, emotionless & has a habit of walking around their house at night when everyone is asleep. 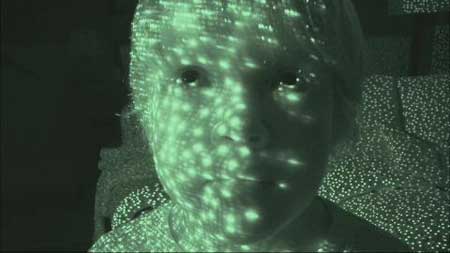 Alex’ parents are going through a bit of a rough patch (A plot element that is only touched on but never fully developed) so much of the film consists of Alex & Ben talking to each either over their laptops or in person. As a matter of fact much of the film consists of Newton’s fresh scrubbed face front and center which isn’t a terrible thing but it does grow a bit wearisome as we wait for something to happen. And things do happen but they happen in a very deliberate manner, a very slow & deliberate manner. I still think one of the most admirable aspects of all of the “PA” films is their power to completely silence an audience as it is far too busy staring at the screen looking at a living room, waiting for something to move. Here, the kids set up laptops throughout the house to monitor what’s going on all day & night, so we sit and stare…and wait.

In the meantime Robbie (Who always has on the same duds) is slowly exerting some influence on Wyatt, apparently getting him ready to meet his “Friend” that he spoke of earlier. We know that his friend exists though because he can be seen following Robbie around in the video footage that Alex & Ben review daily. He appears as a translucent spectre, slowly trailing behind Robbie & Wyatt. ONe especially creepy scene features the audiences first good look at the apparition during a late night bout of video gaming. I didn’t know that the Kinect was capable of doing what it does here in this film and I’m anxious to try it out myself as it’s a pretty cool effect. 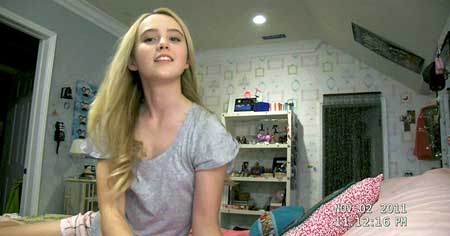 Slowly Robbie begins to convince Wyatt he’s not really who his step parents say he is. And after a bubble bath during which Wyatt goes under the surface and is held there by something for more than a few minutes, he surfaces all zonked out just like Robbie is. Once Robbie gets Wyatt to cross the street and go to his home we discover who Robbie’s mom is and why Wyatt isn’t really who anybody (Including himself) thinks he is. If you’re familiar with the previous entries (Especially pt.2) you can probably figure out the rest without any help. If you’re not you better get to watching some of the previous entries to catch up cuz I’ll say no more. 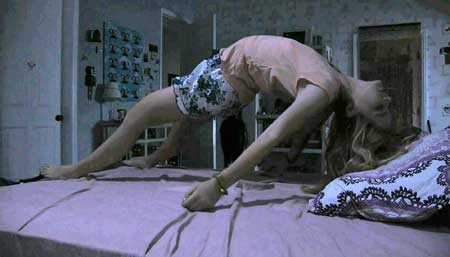 With some obvious nods to “The Changeling“, “The Shining” & “Poltergeist” tossed into the mix, “PA 4” might represent a loss on the writers part as to where the plot should go. I mean you can only have so many doors open by themselves or sleeping bodies levitating in the middle of the night before people start staying home but overall “PA 4” still elicits screams at regular intervals. As a matter of fact it’s the perfect movie to see with a large audience as the audience I saw it with was delightfully raucous and terrified at those same slowly opening doors & floating bodies. There was a genuine electricity in the air and directors Henry Joost and Ariel Schulman don’t take too many pains to deviate from the formula that producers Jason Blum & Oran Peli (Who directed the first installment) have maintained from the beginning. The script by Christopher Landon doesn’t do too much different either except for the ending which was admittedly scary & heart stopping. The audience was in a frenzy during the last five minutes! 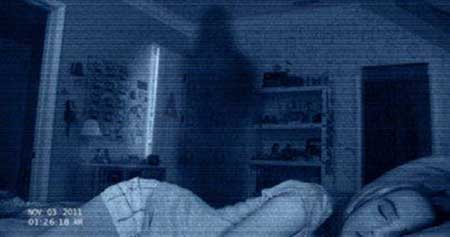 All performances are good but special mention must be given to both Newton & Shively who as the teens who are suspicious of little Robbie are totally believable and extremely likable. And Brady Allen falls just thisshort of being the creepiest kid in a movie…ever (I still reserve that “Village Of The Damned” Martin Stephens deserves that crown). I liked “Paranormal Activity 4” more than the third installment but not as much as the first two. I still think that they’re gonna have a hard time maintaining the wisp of a story that they repeat ad nauseam but for the here and now…it’s still good enough to give you a bit of a chill.

By the way, hang around after the end credits are done to catch a clue as to where part five is headed. I couldn’t make heads or tails of it but it’s there waiting for you to decipher…