In 2074, when the mob wants to get rid of someone, the target is sent 30 years into the past, where a hired gun awaits. Someone like Joe, who one day learns the mob wants to ‘close the loop’ by transporting back Joe’s future self.

Maryland native Rian Johnson who brought us “Brick” and “The Brothers Bloom” writes and directs this inventive, fun and dramatic sci-fi movie that is fast paced and thought provoking while maintaining some heart and soul. In keeping with the last few imaginative movies like “Source Code” and “The Adjustment Bureau“, “Looper” has quite a bit of charm and serves up some very wild ideas that are original and interesting. Looper for all intents and purposes is a very decent film worthy of being encapsulated in the universe of The Matrix movies and beyond. The film is high concept but of little conceit. It make us think and gives us plenty of information in order to paint a picture in our minds that completely defines the film. It is what makes the film work much to our liking. 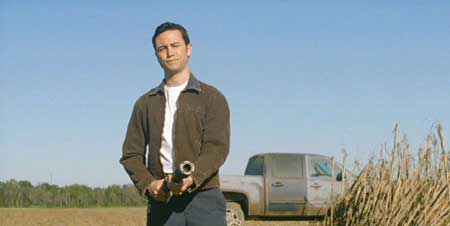 Joseph Gordon – Levitt plays what is called a “Looper” which are people used by a futuristic criminal organizations to assassinate people in the past. In the future, 2074, time travel is pretty much against the law and is banned. Also people have telekinetic powers as a result of mutation. Joe Simmons is a Looper that works for Jeff Daniels in Kansas. Daniels being a Looper “Boss” of some type is himself sent back to keep an eye on other Loopers. Abe (Daniels) also owns a night club that Joe likes to patronize where he watches Suzie (Piper Perabo) do her thing. Joe has his own posse that he leads that also includes the overly eager Kid Blue played by Noah Segan. Paul Dano ( Cowboys and Aliens) plays Seth who is a Looper friend of Joe’s. He tells Joe that he couldn’t complete a “Loop” and is in danger. Joe tries to protect Seth but it all goes wrong and eventually future Seth is whacked by Kid Blue. 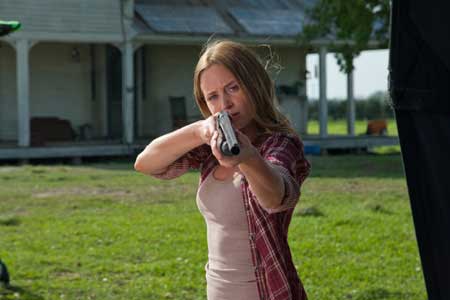 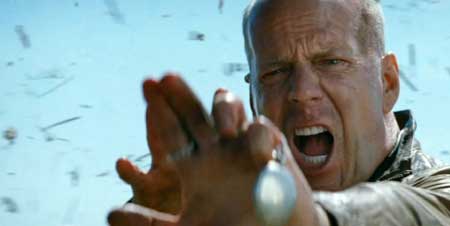 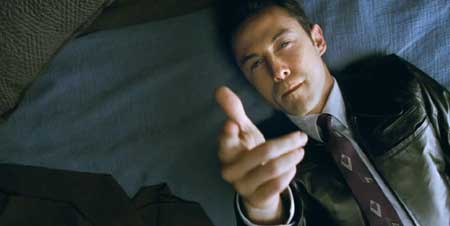 Things get interesting in Johnson’s Universe when Joe meets up with his future self played with understated power by Bruce Willis. They end up meeting in a diner where Old Joe tells Young Joe that some bad ass dude called The Rainmaker is closing all the “Loops” which means that Joe’s contract is at an end. Old Joe’s wife, though, during his escape from The Rainmaker is killed. Old Joe and Young Joe barely get away from “The Gat Men” that hunt them down. Still with me? Yeah, it gets complicated as hell. It’s a “Flowchart” kind of film. Old Joe gets some info on what are 3 possible children born on the same day that could be the young “Rainmaker” Telekinetic Sara Rollins played by the always awesome and very damn cute Emily Blunt (The Wolf Man) gets involved as she helps Joe, giving him some info on her son, Cid’s birthday and place of birth. She and Joe get close and she tells him that she had a sister that raised her kid and when some bad dudes came around, Cid displayed some wicked powers. Powers that Sara claims killed her sister. Oops on Cid. Old Joe eventually gets caught by Kid Blue. He then proceeds to escape, whacks Abe and his crew but leaves and goes after Cid and Young Joe. Young Joe tries his best to protect Cid and Sara trying to close the loop and trying to help Cid avoid his violent and dubious future. 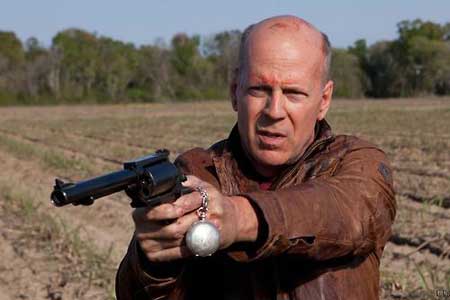 “Looper” is just plain fun. It is a very outrageous concept and belongs to that very rare ilk of movies that are inventive, mind blowing and entertaining. It is equal measures of heart and action that never panders to the audience. Some of the situations are impressive and unpredictable which makes second guessing the movie a moot point. You just never know where the film will go and what the characters will do. Rian Johnson takes you on a completely exciting ride that takes the tried and true time travel convention to new and interesting heights. The performances are great here too. Willis is his usual stoic and serious self but seems to have a playful gleam in his eye that makes the viewer feel right at home with his capable presence. Gordon – Levitt is intense, physical and very watchable. He has a stern presence here and he fits the mold and machinations of a gruffy young Bruce Willis brilliantly sporting some freaky make up and prosthetics that make him appear almost alien like and otherworldly. It fits in perfectly here, though. Blunt is just so damn fine and very pretty that sometimes I just stared at her and forgot she had lines and that she plays an important part in the movie. She is a very strong person here and it is her great caring and entrenched presence that gives the film some great authenticity. 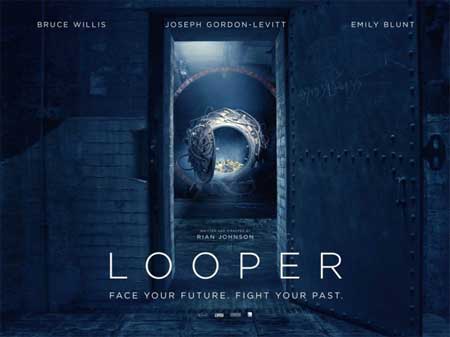 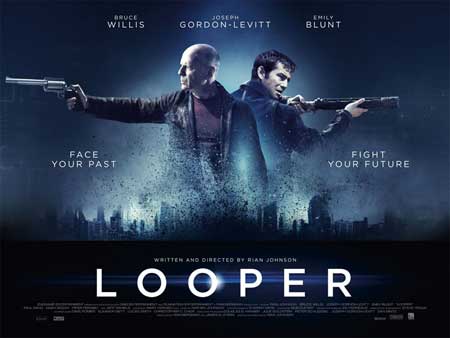 Rian Johnson succeeds here with executing his idea though and that is what fuels the film and makes it brilliant. Great production design that looks real and futuristic at the same time. Incredible camera work by his DP Steve Yedin who shot “May” brilliantly for Lucky McKee and just wrapped up the “Carrie” remake. Weapons are very cool and the action set pieces are done with frenzied style. There is so much to dig here with “Looper” that one leaves the theater wanting more and wishing that we had had the pleasure of a film like this so much sooner. “Looper” is tight, fun and very edgy bordering on being a bit quirky like other Sci-Fi films that have a drier side of humor plus tongue in cheek appeal. I highly recommend it. Enjoy!

Looper (2012) is now available on Blu-ray per Sony Entertainment