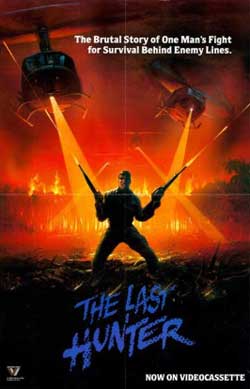 During the Vietnam war, an American soldier gets trapped beind enemy lines. A squad of his buddies sets out to rescue him.

As a child of the eighties my introduction to the Vietnam war movie genre came courtesy of one John Rambo. Some would say not the best way to be introduced to it but at the time I thought those were some of the coolest movies ever, and to this day I still love the first one the best and will watch it whenever it comes on the television.

The one thing that these and other action movies of the era, especially those of Arnold Schwarzenegger and the like, have in common is the need to overkill with bullets. I mean, why kill someone with two or three bullets when twenty or thirty will do quite nicely?

The Last Hunter is one such type of action movie that seems to love its explosions and blood and gore and violence as much as it likes carrying a message of the sometimes chaotic and inhumane aspects of war.

Captain Henry Morris (played by David Warbeck) is our hero and he has seen too much of the dark side of the conflict. Almost to the point that he’s numb to it. His best friend from back home, Steve, is worse off than he is, though. In a really good opening sequence they are hanging out in a Saigon bar with other soldiers enjoying some drinking, smoking and smoking-hot women. A night of relaxation.

But things take a turn for the worse when Steve finally goes over the edge. Distraught over the belief that his girl, Carol, has left him and the toll that the war has taken, he shoots one of his fellow soldiers in the face before turning the gun on himself. All of this right before a major attack happens all around the bar. This scene is really well done and sets the table for the rest of the film.

Captain Henry Morris is being sent on a secret mission to take down a radio tower that is transmitting anti-war propaganda, constant messages telling American soldiers to lay down their weapons, disobey orders and get home to their girls.

For the most part this is his mission alone to complete but along the way he gets help from several soldiers and a lady photojournalist named Jane (played by Tisa Farrow, sister to Mia Farrow). One of my favorite characters is a large black guy named Sgt. George Washington who simply prefers to be called Wash. Played by Tony King, he is simply a joy to watch. 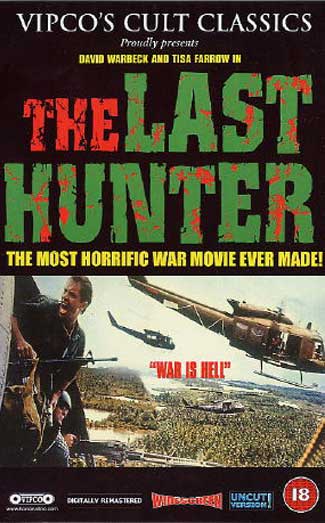 Making their way through the dense jungles provides many dangers. Snakes, rats, devious traps and of course enemy soldiers are just a few of the many obstacles that Captain Henry Morris and his helpers must overcome.

All in all I enjoyed The Last Hunter. It is a solid action movie and has lots of gunfights and explosions, not to mention scenes of blood and gore. For a war movie it can feel exploitive to some and from what I’ve read online I guess the producers wanted the director to make it more of a non-stop action movie rather than a slower, more serious and politically oriented film.

There are some really good scenes in this movie and some rather strange ones as well. One involves the fetching of a coconut by a soldier for his commanding officer. It’s cool and weird and I’m still not one hundred percent positive what exactly the purpose of it was.

One aspect of the movie that can be a little jarring is the soundtrack and score, which mostly consists of a disco type sound. Makes sense for the time period the movie was made but doesn’t always gel with the actions being portrayed on the screen. 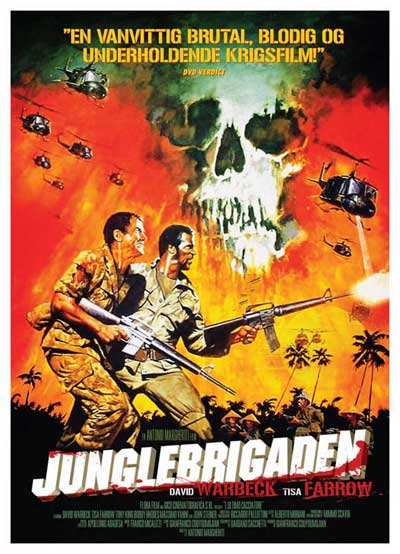 In the end I would have to recommend The Last Hunter, especially if you are a fan of action war movies. The plot is fast paced and the characters likable. If you look hard enough there will be things to complain about but in the end a good time will be had. 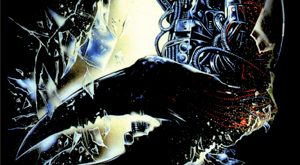