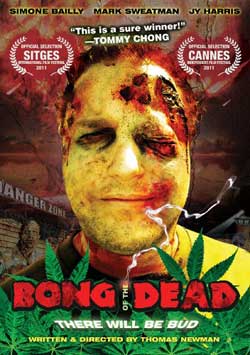 When the world is taken over by flesh eating zombies, best friends Tommy and Edwin figure out a way to benefit from it by turning zombies into fertilizer for growing potent weed!

The Black Saint has been known to indulge in a bit of ceremonial cannabis burning (OK…I enjoy a nice blunt every so often) from time to time. The medicinal attributes of the herb are well documented as being good for you and the hell with it…I like the feeling I get from some good weed. It helps to kill the pain. The pain of having to sit through some terrible movies that my truly evil editor seems to like to foist upon me for review. I thought I was going to have to light up a giant spliff as “Bong Of The Dead” began because it didn’t look like I was even going to be able to stay awake but much to my surprise & (Relative) delight, I got a winner for a change! No spliff necessary!! 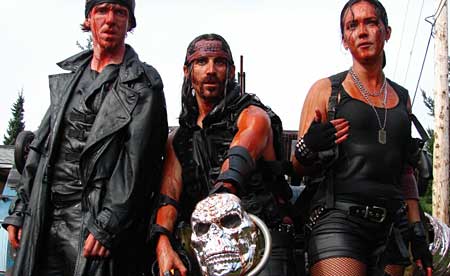 “Bong Of The Dead” tells the story of a zombie outbreak that pretty much engulfs the globe. The outbreak begins with the arrival of a meteor that crashes in the backyard of an old man who’s just finished painting one of his lawn gnomes and is putting it in his backyard garden. It crashes directly behind him and naturally he decides to fool around with it. It cracks open and it’s filled with some nasty looking goo which he promptly manages to stain himself with (Never mind that the damn rock should still be as hot as hell & impossible to even get near let alone touch it). He feels a bit odd afterwards and goes to bed for a nap. When he wakes up, he looks in his mirror to find some disgusting boils growing out of his scalp. He pokes at one and it bursts open, spraying ooze all over his head/face.

He goes to the dinner table (Covered in blood and goo mind you) where his TV addicted wife serves him dinner. She’s so addicted to the TV that she never even notices what he looks like. She puts his plate down in front of him, KISSES him on top of his ruptured boil covered noggin and goes right back to watching television, never once noticing her husbands condition. He seems confused about what to do with a fork so he jabs it into the side of his head, causing blood to drip down on his dinner which all of a sudden makes the chicken on his plate a lot more appetizing to him. He devours the blood covered fowl when he realizes that his wife might have some more blood inside of her to share. So he gets up & kills her which leads to a scene in which the both of them are sitting side by side in front of the TV, listening to a report about a zombie outbreak as they casually feast on each other’s innards. It’s a truly revolting scene but it did make me laugh out loud. The entire first 10 minutes of the movie are dialogue free save for some moaning from the elderly couple but it does a good job in setting up the scenario for the rest of the film and it is really disgusting to boot. I liked it! 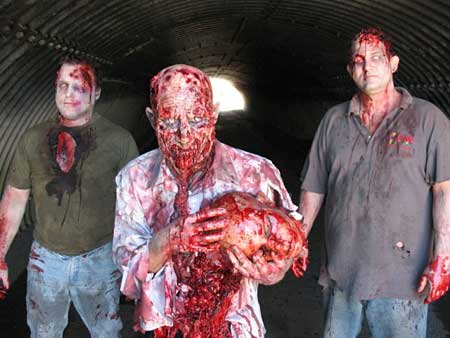 After the title sequence is done, we are told that it is now “Six months later” and we find ourselves introduced to the two lead characters, Edwin (Mark Wynn) & Tommy (Jy Harris). Two stoners who are a combination of Cheech & Chong and Bill & Ted. Neither one of them is very bright nor are they especially ambitious people either. They’re both quite content to smoke their lives away as the world is now broken up into sectors where humans and zombies are kept far apart from each other. Edwin has discovered that if he takes a zombie brain, dehydrates it, crumbles it into dust & mixes it with water the end result is a type of “Super Fertilizer” that when poured onto a marijuana seed, makes that seed immediately grow into a super plant that produces some heavy duty bud. It is the best high they’ve ever encountered and they want more. But Edwin is all out of his liquid fertilizer so they decide to take a trip into one of the forbidden sectors where zombies run free to score some more zombie brains. Seeing as they are always high this probably isn’t the best of ideas.

Almost immediately they’re captured by the nefarious Alex (Barry Nerling) who just happens to be the one zombie that is aware of his situation & isn’t just a shambling hungry sack of skin. Alex has plans for world domination but his “Army” consists of only a few zombies that don’t take instructions very well. After escaping from Alex, the duo’s car breaks down in front of a farm inhabited by Leah (Simone Bailly) who is tough as nails on the outside but still a lady underneath it all. She decides to join the guys & builds them a pimped out vehicle designed for maximum carnage but just then, Alex resurfaces with a MUCH larger army of zombies at his disposal and he’s looking for some payback. 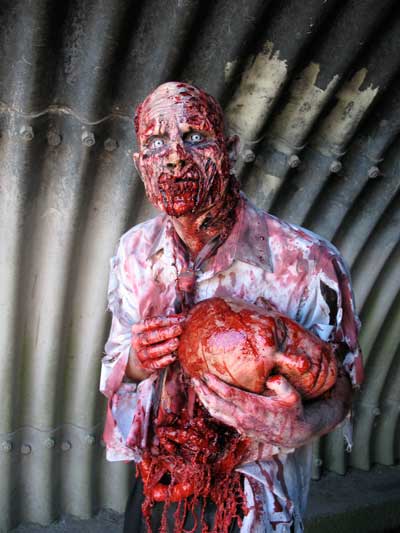 “Bong Of The Dead” isn’t going to win any awards for acting or script writing. The two leads are way over the top at best and downright amateurish at worst (They maintain a balance somewhere in between). Nerling and Bailly (Alex and Leah respectively) fare much better but still aren’t really pushing the envelope acting wise. A lot of the film is wasted with the “Three Stooges” antics of Edwin & Tommy which is fun for a few minutes but grows steadily tiresome as the film continues. But…when the blood starts flowing (We get little splashes of grue every so often) during the last 30 minutes of the film it becomes a gory delight! All of the ersatz humor just seems funnier when it’s accompanied by what seem to be dozens of gallons of blood & entrails. 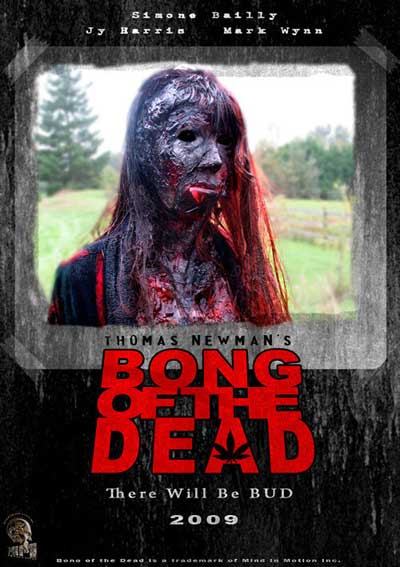 The budget for this film is rumored to be $5000 dollars and producer/director/editor/writer/effects artist & cinematographer Thomas Newman is something of a magician. He performed all of these duties well (Excepting the screenplay which dwells too much on silly slapstick at times) and I’ll be good god damned if despite all he had going against him he didn’t release a halfway entertaining movie! I don’t really get the title (There is no titular “Bong” to be found here) but that’s of little consequence. “Bong Of The Dead” is a lot of grisly fun despite it’s reliance on some really bad jokes to get through it all. It combines “Zombieland“, “Dead Alive” & “Shaun Of The Dead” and manages to score a near bullseye. And trust me when I say that the gore, when it arrives, is definitely worth the wait. Hang around after the end credit sequence begins for a little something extra that promises an even more riotous sequel. I hope Newman gets a chance to make his sequel and I hope he gets more than five grand to make it with. Man, what this guy could do with a cool million boggles my mind…

A solid three out of five shrouds for “Bong Of The Dead”. It’s all been done before but somehow it feels kind of fresh here. Fresh like the fresh smell of blood in a slaughterhouse that is! Go look for this movie now! Despite my reservations it is still well worth your time. 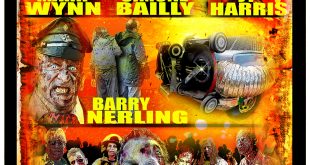