Could you give our Horrornews.net audience a brief synopsis about your film?

Edwin and Tommy are two stoner buddies who are lone survivors of a mass zombie outbreak caused by meteorites. One day they discover a great zombie fertilizer that helps grow super potent pot. The problem is since the government has cleared out many of the major cities, there are no longer any zombies where they live. In order for them to get more zombies for fertilizer, they must go on a road trip to the “Danger Zone” where they hope to find and gather as many zombies as possible for their brains. Along the way they get captured by an evil 3Zombie named Alex who has a plot to organize an army of the undead in order to take over the world.

Once they escape his clutches, they team up with Leah Kroaker, another lone survivor who has spent the past year of her life since the outbreak tinkering and building things on her farm. She joins the boys and builds the ultimate zombie killing machine in order to help them on their quest.

What horror genre movies and directors influence your creativity?

I’ve always appreciated the classic B-Horror films like any other film nut! The ones that influenced me to do this movie are a variety of films and Directors starting with Kubriks 2001, then to A-clockwork Orange, then Nigh, Dawn, Shaun and Return of the Living dead! Also a little of the Exorcist for creepy factor! Of course my idols Tarantino and Rodriguez and their rebirth to the Grind House cinema right back to Peter Jacksons Dead Alive then back over to James Cameron’s terminator. I put a piece of everything I’ve ever Loved in movies and a lot of myself into my first film. How long did it take you to come up with the concept and write the script?

The concept was something that just kind of happened over a few days once I decided I wanted to do a film. I actually decided to start writing the script right away so that I could begin the pre production process of assembling a cast and crew. I only had 7 pages written before I found the property I wanted to film on and already casted half the characters already. It then took me 2 weeks to write the entire script around the property even though the owner had not given me the go ahead to use it yet. I just kept going like as if he had said yes…thank god he did!

You made this film on an extremely tight budget. Can you tell us a little about the equipment used to create “Bong of the Dead”. What type of video camera was used? What type of editing software was used?

I have always said to people that you don’t need a lot of money to make a movie, you just need a lot of talent, time and undying passion and drive! It also helps greatly if you know how to use whats around you rather than make things you want and have to pay for them to be built. I was able to shoot the whole thing on a borrowed Sony A-1U camera with a wide angle lens. I then was able to get all the Make Up and the artists for free because of my friendship with Mike Fields. He happened to have a shed full of hundreds of zombie bits and pieces which he had no plans for so I claimed them! I remember it took several truck loads just to get it all out of his place and into mine to prepare for the filming. Once we wrapped the film I went into post production and began learning tutorials for other new software such as After Effects by going to Video Copilot.net. A great resource to filmmakers! I then spent literally 24/7 reading, learning and doing as I plowed though over 365 shots to date! I did it all on my Mac Pro Quad Core which I had bought before I even knew I was going to do my film. I’ve always loved Apple so the MAC itself made me want to get out and do it. I edited the whole thing in Final Cut Pro and created all the music myself in Sound Track. It was the worse time of my life being cooped up for almost 3 years now in my basement, but the best time of my life at the same time. I have learnt so much and have gained even more confidence in myself. Financially speaking, what was the most difficult part of getting your movie completed?

The most difficult part of the movie was and has always been trying to get the film out of the MAC and onto DVD! Filming the movie was easy for me, its all the post production endless days which blend into nights then early mornings etc. Most of my days are a blur to be quite honest. Im consumed by trying to get my film out there. I knew how to spend my 5K so I had no problems with coming in on budget. I only paid for what I absolutely needed to pay for and got everything else by talking the good talk and bullsh*tting people. Its one thing to get people to help you for free but its another when you hide things from them to do it. I know that by being up front with my cast and crew and telling them right from day 1 what to expect was the best thing I did. I told my cast and crew to expect working 12 hours minimal and that we may go over some days. They all respected that and gave me their 100%! As a matter of fact our fist day of filming in the boys apartment ended up being 22 hours straight from morning to morning. I think you can see the look of exhaustion on my face from the photo below.

Do you prefer fast zombies or slow zombies?

I admit I love the old slower moving zombies more. Its the classic zombies that I know I can take! the fast ones are a bit too scary if you ask me. However what I do love about the fast zombies is how we as fans have accepted them as cool and official. I love how Danny Boyle was able o make it happen by doing 28 days later and the whole concept behind rage. Thats the beauty about filmmaking I guess, anything is acceptable if you make a true effort.

Would you have been able to make this movie without the help of make-up artist Mike Fields?

The one thing I can always say is this. I never fully depend on anyone to make my productions fly! The reason is no one will love your project and be as devoted as you are to your film as you yourself. Im not saying Mike Fields or anyone else I’ve ever worked with is not reliable Im just saying that is why I do so much myself and learn so much along the way because Im lucky enough to be able to pick up and run no matter what the out come. Mike Fields did an amazing job on this film by bringing not only his talent but also his materials and other talented make-up artists he has relationships with. Im luck that my background is also Make-Up FX so I could pick up and go with any situation. I just did not want to do that on this film. Theres no way I could’ve done the make-up on 50 people and direct as I was setting up lights and pushing my own dolly while pressing record on the camera. I did put in all the contact lenses on because Mike gets creeped out by having to put his fingers in peoples eyes! Hilarious right? We work great together because he knows what I want and know what he can deliver.

What advice would you give someone else who might be trying to make a horror movie for $5,000?

Best thing you can do is be prepared for every situation and don’t listen to anyone who tells you that your project is too ambitious. Thats a sign that they lack ambition and you don’t want them on your crew because they are the types of people that will bail on you the second things get tough. Making a movie is no easy task especially when you have to develop multiple personalities to fulfill so many roles. The more shoes you fill the more control you have over the final outcome and the better you’ll feel about your vision. BUT don’t be fooled by your vision to make a movie. Don’t forget its a business first then art second. If you make a movie for you and your friends then its your prerogative. However if you want to make a living at it then you have to always keep your audience in mind. Make a movie people will want to watch so that it can get you your next movie and so on. My biggest piece of advice is never take “NO” for an answer and always “Dare to dream”!

Could you share any interesting behind the scenes stories from the making of “Bong of the Dead”?

The most interesting stuff in behind the scenes of Bong is still happening as I am mixing the film for final distribution with my Sound Producer Andres Santana. I would be over in his studio and he his doing his thing on the mixer and playing with sounds and levels. then out of the blue he would turn to me and say I think we need another sound here, like cloth moving or floor creaking. Within seconds we would have his mic set up and I would be folying the sounds he needs and he would drop them into the timeline, cut and tweak and we would move on! Its the most amazing part of having technology at our finger tips like this. I even have filled in ADR words, breaths and movements for my actors in various scenes and its seamless! We then look at one another and laugh about how in Hollywood it would take 6 guys and a day and a half to achieve what we did in his studio with the 2 of us in 1o seconds. Its all creativity and the mind set that you can.

What’s next for “Bong of the Dead”?

Bong Of The Dead is now in its distribution phase and I am working with german territories first then will be working with US and North American territories. I cant wait to get this film out there and show people what a lot of passion, drive and pure determination can get you. I hope it inspires others to believe in themselves as well. 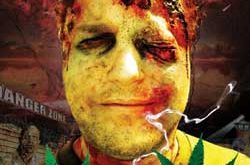