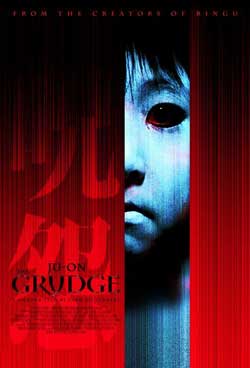 A mysterious and vengeful spirit marks and pursues anybody who dares enter the house in which it resides.

Ju-On the Grudge, directed by Takashi Shimizu, is a thrilling story of a haunted house and the people who have the misfortune of walking through its door. Rika (Megumi Okina) is a volunteer social worker charged with caring for Sachie (Chikako Isomura), an elderly woman who lives with her son and daughter-in-law. Rika arrives at the house to find it in a mess and finds Sachie lying on the bed, disheveled and catatonic. Rika sets out to clean up the disheveled house and takes care of the elderly woman. While she is vacuuming she finds a picture of a man, woman and child, with the face of a woman cut out. Rika follows the mess up the stairs, cleaning as she goes and finds a closet that is covered with tape. After hearing a noise inside the closet, (this is where I would have run) she pulls off the tape and finds a black cat and a young boy. It is the boy from the picture. He tells her his name is Toshio (Yuya Ozeki). She immediately calls the welfare office and notifies them of the child. They know nothing of a child at the residence. Rika hears Sachie mumbling and goes to her side. Then it really gets spooky. Rika faints. 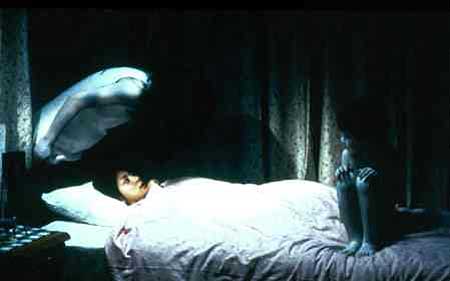 Next we are with Kazumi (Shuri Matsuda), Katsuya’s wife and Sachie’s daughter-in-law. She and Katsuya (Kanji Tsuda) think that it is Sachie that is leaving rubbish all over the house. Kazumi assumes the reason Sachie sleeps all day is because she roams all night. Katsuya leaves his wife and mother and goes to work. Kazumi falls asleep. She is awoken when her coffee cup is turned over on the coffee table. She thinks Sachie did it. Then Kazumi sees a child’s hand print on the door. (Kazumi and Katsuya do not have children.) She hears sounds upstairs. (Run Kazumi, Run!) 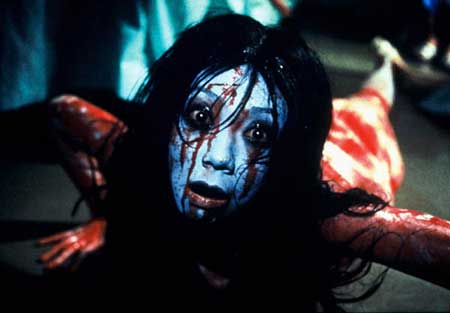 When Katsuya comes home from work he is startled when he finds his wife upstairs lying on the bed in a catatonic state. Katsuya is even more startled when he himself falls victim to the presence upstairs. His sister, Hitomi (Misaki Itô) arrives for a visit and finds her brother sitting on the stairs behaving strangely. Katsuya pushes Hitomi out in the rain and tells her to go away. 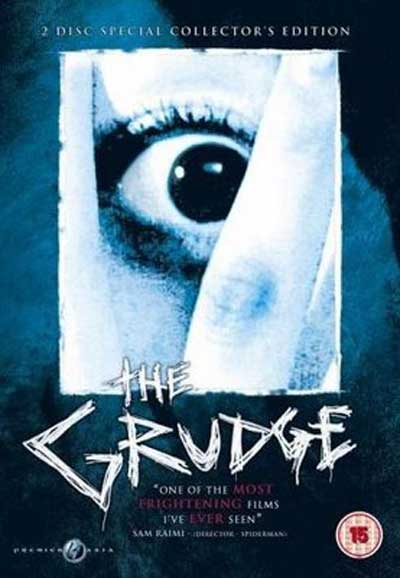 Hitomi is worried about her brothers strange behavior. She leaves her brother and is next in an office building. Once in the ladies room, her phone rings and caller ID says its her brother. When she answers, she hears a strange rattling noise. She hangs up the phone when someone in the stall next to her bangs on the wall. Hitomi apologizes and puts the phone away. When she leaves the stall she is startled by a toy bear that is thrown from under the adjoining stall. She hears the death rattle and then a figure with long black hair starts to come out of the stall. Hitomi runs. (I would have run too). She goes to the security guard office, (she should have called Ghost Busters) and reports what she saw. He leaves her in the office and she spots him on the surveillance camera. When he mysteriously disappears Hitomi leaves the building, (What took her so long, I would have been gone long ago.) Hitomi goes home to her apartment and is at a loss of what to do next. She then gets a visit from what she thinks is her brother. He is ringing her door and she sees him when she peeps out the peephole. When she opens the door he is gone. She goes to her room and is terrified when her TV messes up. She hides under the cover and is mortified when she realizes she is not the only one hiding under her cover.

Several other people go into the house and there is an investigation. Survivors are few and when they survive they are left traumatized like Rika. Four girls go into the house when they find out it is haunted. One of the girls is immediately startled and leaves. The other three comes up missing. An investigation is done and the investigators themselves start to disappear. Rika, who is recovered now meets and has lunch with an old friend. Rika is startled when she sees a glimpse of the little boy from the house under the restaurant table. In a turn of events Rika is lured back to the creepy house and is faced with the truth of what really went on there. 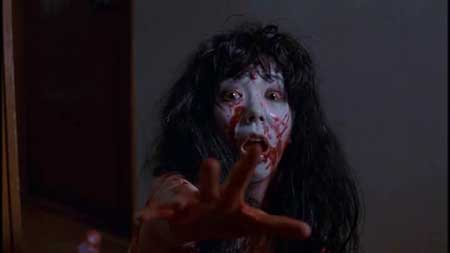 This movie scared the beejeevers’s out of me. I screamed several times and had to cover my eyes more than once. I LOVED IT.