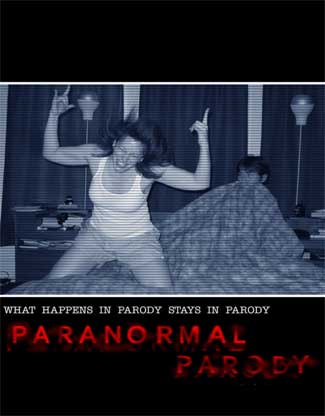 In 2007, the international blockbuster sensation PARANORMAL ACTIVITY took the world by storm and inspired a new generation of filmmakers. Including C.J. Goodman and Ann Daman who, armed with a camera, a handful of actors and one location, set about filming a send-up of the original ghost, demon, whatever in a house story. PARANORMAL PARODY follows one couple’s harrowing and hilarious adventures as they try to chronicle the odd things happening in their house and discover that they are not alone.

After a young, middle class couple moves into a new house they couldn’t possibly afford, they start to experience some strange events, that just might be demonic. But rather than getting the hell out of there, they decide to document the whole thing.

Sound familiar? Well, at least this time the demon has a sense of humor. Inspired by the ultra low budget international sensation PARANORMAL ACTIVITY, intrepid independent filmmakers CJ Goodman and Ann Daman, armed with only a camera, a handful of actors and one location, over the span of one weekend, came up
with a hilarious send-up of the original ghost, demon, whatever in the house story.

PARANORMAL PARODY follows one couple’s adventure as they try to chronicle the odd things happening in their house and discover that they are not alone. October Harvest and Real Genius Productions present “PARANORMAL PARODY” starring Kristen Kakos, Ben Euphrat, Kimberly Ridgeway, and Rob Medsger.

The film was directed and written by C.J. Goodman, edited by Brandon Hunt. The executive producers are Ann Daman, Joyce Goodman and Jonathan Winchell. This film has not been rated, but contains strong language and some sexual suggestion.Check out the official website at www.paranormalparody.com and view the trailer and more information about the cast and crew. PARANORMAL PARODY is available for digital download on iTunes and DVD with a slew of extra features.