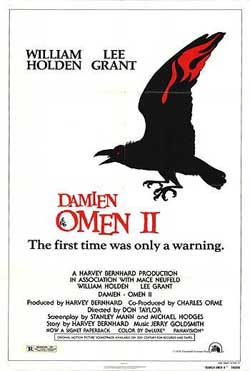 The continuing saga of the Devil’s son rising to power.

The film begins shortly after Robert and Katherine Thorne have been killed (The Omen). Burgenhagen (Leo McKern), the original archeologist in the previous film, has now discovered the Wall Yigael and desperately attempts to convince Morgan (Ian Hendry) that the Antichrist is alive and well. He gives Morgan a box filled with the seven daggers of Meggido and a warning note, to be delivered to Damien’s custodians. Morgan is unconvinced until he is taken into the ruins and shown the wall, which uncannily includes an almost exact image of Damien (Jonathan Scott-Taylor). The two quickly rush through the exit tunnels only to find themselves caught, along with the box, in a terrifying cave-in that kills them both.

It would be seven years later before the box is again discovered. Damien is now twelve years old, under the care of his Uncle Richard (William Holden) and step Aunt Anne (Lee Grant) and preparing to enter the military academy along with Richard’s son Mark (Lucas Donat). While at the dinner table, the night before embarking, Aunt Marion (Silvia Sidney) tries to convince Richard to separate the boys, viewing Damien as a threat; something wicked. Richard will not have any part of it, even as Marion threatens to cut off her money from him. That night, she awakes to find a raven (the prime evil indicator used throughout the rest of the film), and is found dead the following morning. 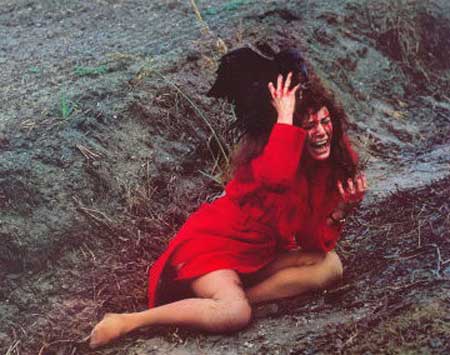 Joan Hart (Elizabeth Shepard) is a reporter and former colleague of Jennings, (from The Omen part one), who has seen the wall and picked up on the trail. Desperately, she tries to convey her fears to Richard. Of course, he won’t listen. She questions herself, as well as wondering whether Damien actually looks like the painting on the wall, and goes to see him at the military academy. Upon viewing the adolescent, she becomes extremely fearful and certain that he is the one depicted. Panic driven and fleeing, her car mysteriously shuts off on a desolate highway; enter the raven, attacking and pecking out her eyes. Unable to see, she inadvertently stumbles into the path of an oncoming truck, killing her.

Corruption begins at Thorne Industries when Paul Buher (Robert Foxworth), a lower level manager who meets Damien at Mark’s birthday, takes matters into his own hands and begins buying up land for a company agriculture project that neither Richard, nor head manager Bill Atherton (Lew Ayres) agreed with. Bill, having tried to stonewall the expansion, is killed when he falls through the ice at a hockey match. Coincidently, it is one of the most chilling scenes in the film as the camera follows him perpendicularly flowing under the ice frantically looking up and through. You can almost feel the audience holding breath along with him. 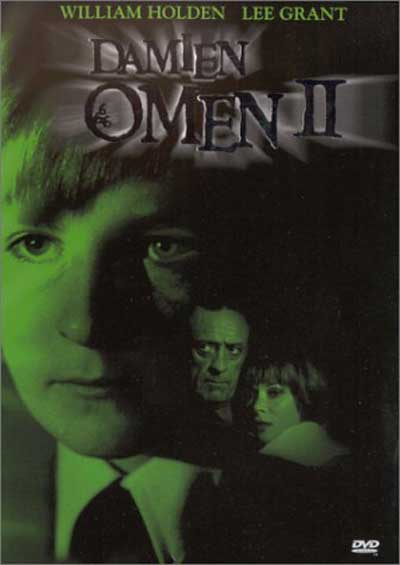 Back at the academy, Damien learns of his legacy with the aid of Sgt. Neff (Lance Henriksen), who leads him to the Holy bible’s Revelation, chapter thirteen. Damien takes an active interest and learns that the beast’s number is 666. Questioningly, he searches his body and finds the 666 mark on his scalp. Distraught, he wonders why he is the chosen one. It is the one single part in all three of The Omen film series that shows Damien’s compassionate side. Regardless, the grand evil plan is in place and anyone who stands in the way are certain to be disposed of.

In an accident at the Thorne plant, Pasarian (Allan Arbus) is killed by toxic fumes before he can disclose to Richard that some landowners, unwilling to sell, had been killed. Coincidently, Damien’s class, who happens to be visiting the plant that very day and are caught up in the events. At the hospital, (Meshach Taylor), a doctor who examined the adolescents, is perplexed as to why Damien is the solely unaffected one of the group. With the aid of a microscope, he further investigates and realizes that Damien’s blood cell structure more closely resembles that of a jackal and not a human being. On the way to disclosing the discovery, he his killed in a gruesome accident where an elevator cable cuts him completely in half.

In the meantime, the box containing the daggers and note has been found and is sent to the Thorne Museum. The curator, Dr. Warren (Nicholas Pryor), opens the box and reads the note explaining that Damien is the Antichrist and that the daggers are the only thing capable of killing the ungodliness. Clearly shaken and frightened, he takes the note to Richard, who mostly doesn’t believe, especially when Anne convinces him that the whole idea is ludicrous. 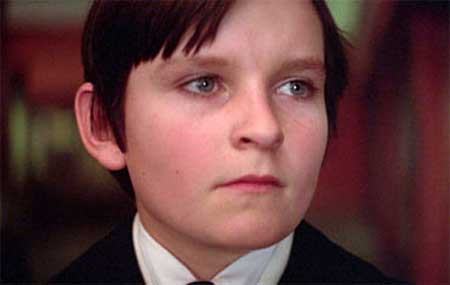 Overhearing the entire conversation, Mark confronts his once close cousin, now viewing Damien with fear and remorse. Damien halfheartedly attempts to deny the allegation, but eventually admits that he is the spawn of Satan. Claiming that Mark is like a brother and that he cares for him, Damien implores him to join his quest, which Mark adamantly declines. He is killed by a brain aneurysm, brought on by Damien.

Richard is distraught over his son’s recent death and accepts Warren’s invitation to view, having been delivered to a shipping yard, the wall himself. While Richard is viewing the image, Warren is impaled between a locomotive and a boxcar and killed. Richard is now fully convinced who Damien is and intends to destroy him. 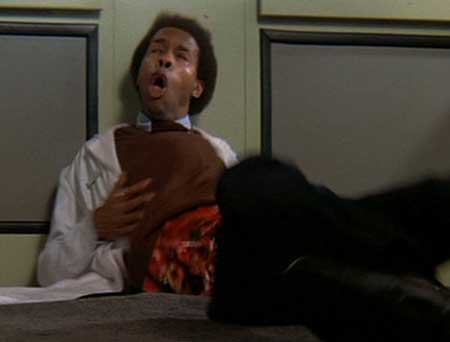 Conveying his intentions to Anne, she vigorously attempts to dissuade, but is unable to. He sends word and summons Damien from the academy, and finds the daggers in Warren’s museum office. Before he is able to act, Anne grasps two of the daggers and buries them deep into Richard’s abdomen, killing him and explaining the she has always belonged to Damien. Damien, having since arrived, has overhead the altercation. He exits the museum, creating a fire that kills Anne.

Damien, now sole heir of the massive Thorne empire, climbs into the backseat of the company car as firefighters begin to battle the blaze.

While demonic undertones continually propel this film series forward, Damien, The Omen II never ceases to give away actual intentions and methods until the right moment, and in doing so, delivers thought provoking chills in the process. While consistently hoping good prevails over evil, it becomes increasingly clear that this will not be the case, and the overall premise can be biblically frightening.