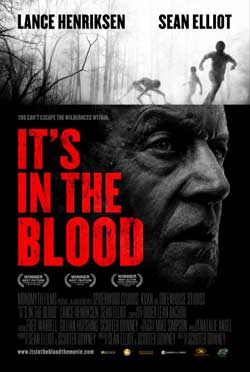 When a father and son become stranded in the wild, they must confront the horrors of their past to escape with their lives.

This will require some soul-searching on the part of yours truly, but the creature feature may be my favorite horror sub genre. Regardless of story or characterizations surrounding it, I’m a sucker for a good monster. On the other hand, there at times stands the rarity which places its beastie, or beasties as the case may be, firmly in the wings, barely affording a glimpse of center stage and focusing instead on the inner demons of its hapless humans. “It’s in the Blood” (“IITB” for the duration) is precisely this enigmatic breed, and it brushes greatness with its creeping dread and potent imagery. 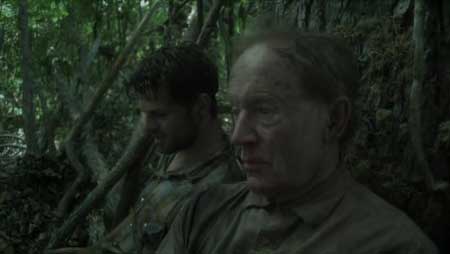 Sean Elliot, who also co-wrote the script with director Scooter Downey (both making their debuts), portrays October, a med student with a photographic memory on his way to a hunting trip with estranged father Russell. The two haven’t seen one another in years, bound but forever torn by a tragedy from their past that continues to haunt them. Both, October through his rigorous studies and Russell with the tried and true method of alcoholism, have closed themselves off from the world. Fan favorite (for one million reasons, all valid) Lance Henriksen brings a sad, beaten pathos to the role of the flawed patriarch in a performance once again reminding us what a truly talented actor he is. A pitch-perfect revelation is newcomer Elliot, whose melancholy October is the keystone of the picture. Their first few minutes together, as October utilizes his gift to save a dog that was the unintended victim of a trap, is astonishingly executed in both direction and delivery. I realized at the bitter conclusion of this scene that I’d been holding my breath. “IITB” did that a couple of times.

After a bizarre bit in which Russell teaches October how to drive a stick shift in his rusty Mustang, mimicking the female shrieks of orgasmic pleasure whilst his son feverishly switches gears (a sight which can never be unseen), the two begin their sojourn into the vast and mountainous forest. Russell wants merely to reconnect, but October pushes to discuss what has turned them into strangers. These plans are put on hold once Russell spots something eerie shifting in the woods and falls off a ledge in his panic to draw his rifle. This results in a gruesome compound leg fracture, an injury which, much like their situation from that point forward, grows progressively uglier. 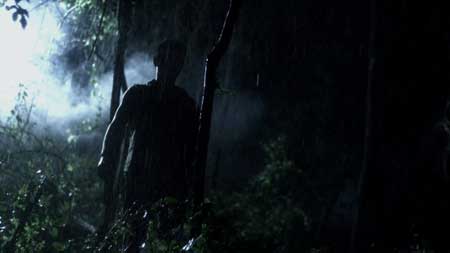 With very few supplies, October again calls upon his fascinating skill to build Russell a shelter and tend to his leg. Taking into account the mental ace up his sleeve, this could be the most resourceful dude on the planet. Stranded with nothing but time on their hands as the threatening figure looms in the darkness around them, the two enter awkwardly into a dialogue about the night in question that shattered their lives, and we learn the heartbreaking fate of adopted daughter Iris (Rose Sirna), viewed previously in only dreamlike flashbacks. Though the reveal is overwrought and lacks the artist’s surrealism of earlier moments of recall, it remains effective as a telling insight into the souls of these two men. Again, applause to Henriksen and Elliot, who bring an air of authenticity to even the sparse occurrences of stilted dialogue.

Once October discovers how severely infected the fracture wound is, he jumps to the task of amputating the leg to save Russell’s life. Unflinching to a degree rarely rivaled outside of torture P*rn (though not as excruciating as the impromptu leg removal in “The Ruins”), some may feel this particular scene goes too far, given the relatively reserved tone of “IITB” until then. As with the makeshift veterinary surgery, I was transfixed and marvelled at the presentation. Downey’s direction (save a couple missteps) is spot-on across the board, embracing the elements of stark reality and hallucinatory visuals incorporated into his and Elliot’s screenplay. Regardless of its thematic handling, however, it should be stated for those with weak constitutions that this is possibly a good time for a bathroom break. It is gnarly. 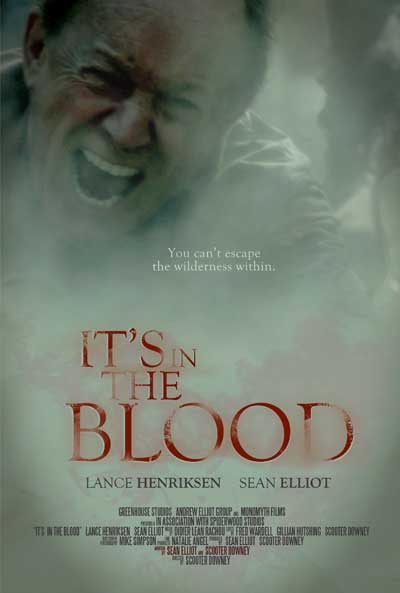 The final confrontation with the creature, though taut and swiftly paced as expected given the proceedings, stumbles in its attempt to bring the movie’s varying elements together in cohesive fashion. When the trap October sets using Russell as bait is constructed, I couldn’t help wondering if he perused the last fifteen pages of the “Predator” screenplay in his mind for inspiration. The entity boasts some outstanding make-up effects in this fleshed-out incarnation, yet doesn’t possess the ethereal menace once it emerges from the fog. This is most likely a deliberate attempt to keep the monster’s existence vague, a possible metaphor for the colliding existential and immediate crises on display. Either way, it felt a bit false amidst the overall scope.

A terrifying and abstract ending makes no attempt to answer any questions, a technique that is often botched in the hands of the unsure, but works wonders here. Presumably an artistic representation of a descent into madness and waving its middle finger defiantly in the face of closure, this nightmarish crescendo leaves everything open to interpretation while still bringing the central drama full circle. Best of all, it doesn’t rely on the tired parlor trick of “Hey, we were dead the whole time! Ta-da!” 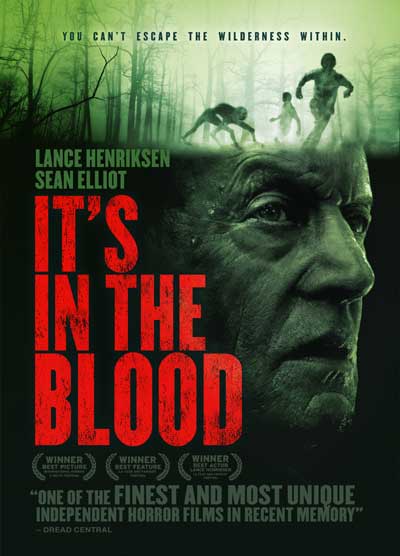 There are not many cinematic offerings one could dub Pretentious Monster Movies, and it’s perhaps an unspoken service to mankind that the talentless stick to zombies, slashers and found footage. I shudder to imagine what some of the camcorder jockeys whose “work” I’m forced to sit through would come up with if they ever decided to think outside of their cozy boxes. Luckily, the likes of Downey and Elliot have the sacks to attempt it, and nearly nail it in the process. “It’s in the Blood,” their moody little piece, is a must-see for those of you who like your big baddies with a side order of thinking.